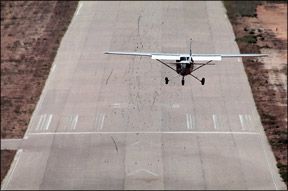 Junes “Saving The Approach” article was good. It reinforced a lot of what I already knew but some of which I hadnt used in a long time since my former airline career. In my retirement, I am instructing both beginning students in a C-150 and

advanced pilots in a simulator.

The paragraph I have a problem with is the one concerning incremental flap deployment on page 14. Concerning instrument approaches, the author thinks the better way is to fly the approach clean until breaking out and then extending the flaps all at once. As he says, it is a matter of personal technique but in many light airplanes (especially high-wing Cessnas) there is a large pitch change when flaps are deployed. Let me suggest (as I do in advanced simulator training) a better technique if you are doing a precision approach down to near minimums (ILS, LPV, etc.): Only deploy approach flaps at the FAF.

Since such an approach will be completed at a relatively long runway, the landing configuration should be set up at the final approach fix (FAF). I do not recommend changing this configuration on short final while close to the ground due to the possibility of a large pitch change.

Of course, if the approach is a non-precision approach or if the precision approach ends up breaking out at 500-600 feet above the ground, go ahead and use full flaps as needed. But I would still suggest leaving everything alone on the stabilized approach providing there is adequate runway, which there should be on most runways with instrument approaches (especially precision).

As always, fly the way you train, do not deviate.

The articles main theme was exploring ways to save both VFR and IFR approaches, regardless of the how and why they need saving. Your technique of dropping some approach flap at the FAF-depending on the aircraft and other operational considerations-is the way were trained and the way we still fly instrument approaches. At least until we need to save the approach for some reason, that is.

Saving the flaps for the last moment and dropping them all at once is simply another arrow in a pilots quiver, as is leaving them retracted all the way to the runway, something we obviously failed to make clear. Thanks!

No argument, and the article tried to make that clear. Its hard for us to determine, but we think the camera simply caught the “hand-propper”-someone with more hand-propping experience than most-while flexing his fingers and before actually touching the prop.

I would guess the 414 driver in Julys Accident Probe had oodles of experience. But in reading the article something jumps out at me: Bakersfield has big runways compared to Sunriver. Theyre wider and longer. Might this pilot have fallen into the classic trap of thinking he was looking at a runway far below where he really was? Im not trying to second guess; just raising another gotcha for which we all need to look out.

Im always “out of the office” for a few once Aviation Safety arrives.