To sense airspeed, the vast majority of airplanes use a pitot tube. Oncoming air enters the tube and is routed to the airspeed indicator or the air/data sensor. That’s where the air’s pressure is measured and compared with ambient or static, then translated into knots or some other measurement and displayed on the instrument panel. The pitot tube itself is mounted somewhere on the airplane’s exterior. As such, it’s exposed to the elements, whether the airplane is airborne or parked.

The basic device was invented by Henri Pitot in the 1700s. In non-aviation applications, its principle of measuring pressure can be used with other fluids, not just flowing air. Like any similar system, if the pitot tube is blocked, it won’t work. And a blocked pitot tube or system poses a significant challenge for pilots of all airplanes. The best examples of what can happen and how pilots might respond comes from two well-documented events.

A TALE OF TWO BOEINGS

Two Boeing 757s departed tropical airports at night after the airplanes had been parked for several days. During the takeoff roll, with the captain flying, the left airspeed never responded. In both cases, the captain decided to continue the takeoff. These two pitot-static mishaps had virtually identical series of precursors, differing only at the end.

On February 6, 1996, Birgenair Flight 301 departed Puerto Plata, Dominican Republic, at 23:42 local time. Accelerating through 80 knots on takeoff, the captain reported his airspeed indicator (ASI) wasn’t working properly; the first officer’s seemed fine, so they continued the takeoff. Climbing through 4700 feet msl, the captain’s ASI read 350 knots while the airplane’s actual airspeed was closer to 220 knots. The autopilot/autothrottle system was using the captain’s pitot for airspeed information and increased the pitch angle while reducing power.

Both pilots became confused by excessive speed warnings and the first officer’s airspeed indication of 200 knots and dropping. Shortly, they received a stick-shaker warning, leading them to question whether either ASI was working. Finally realizing they were losing speed and altitude, they disconnected the autopilot and applied full thrust. But it was too late. A few seconds later, the 757 struck the Atlantic Ocean, killing all 189 passengers and crew aboard.

Almost exactly 13 years later, on January 28, 2009, the captain of an Astraeus Airlines Boeing 757 became aware of the failure of his ASI early in the night takeoff roll on a scheduled passenger flight from Accra, Ghana. He continued the takeoff. Climbing through FL316, the 757’s vertical navigation mode, which used the left air data computer, sensed an overspeed condition and displayed a pitch-up command to slow the aircraft.

The crew noted the discrepancy with the first officer’s ASI and disengaged the automated systems, lowered the aircraft’s nose and handed over control to the co-pilot. The crew declared an emergency and the aircraft returned to Accra without further incident.

The sequence of events in both mishaps is virtually identical, right up to the point the Astraeus first officer pointed out the problem. In both cases, the pitot tubes were left uncovered in a tropical area, the airplane departed at night with no ground lights available and the captain failed to reject the takeoff despite lack of airspeed indication. The major difference was in crew resource management (CRM) practices, which the Birgenair pilots didn’t follow. 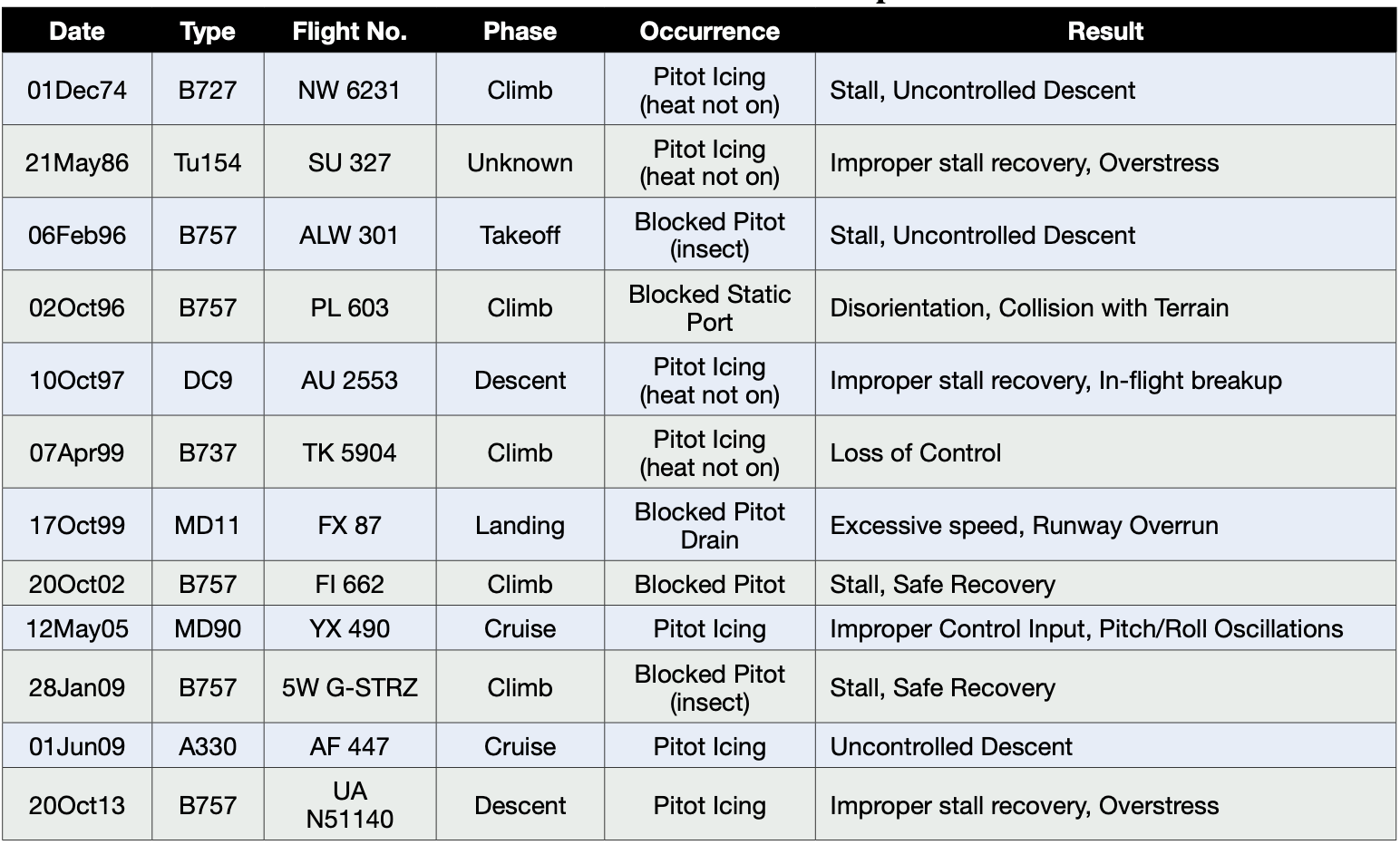 The similarity of these two mishaps prompted NASA to help fund a study to further examine pitot-static accidents and incidents. This article is adapted from the study’s results. The NASA study identified 278 loss-of-control mishaps among transport-category airplanes between 1996 and 2010, including eight related to pitot-static issues. Four additional pitot-static related mishaps, including a landing overrun, were caused by erroneous airspeed indications related to pitot/static system blockage. This includes the Air France 447 accident involving an Airbus A330, as well as Northwest Flight 6231, a Boeing 727, which often is referred to as the “poster-child” of pitot-static accidents. The table above summarizes these 12 mishaps.

Six mishaps were caused by pitot icing. Pitot icing typically affects all on-board air data systems, including the pilot/copilot airspeed indicators and all systems that use airspeed data. These systems include autopilots, flight directors and some flight control functions. Five mishaps were caused by inoperative pitot heat (either switched off or failed). One was caused by atmospheric conditions worse than pitot heat design requirements.

One mishap was caused by static ports taped over by a maintenance crew. Blocking all static ports affects all on-board air data systems, the pilot, copilot, and standby systems and all flight control systems that use air data. Cockpit confusion resulted from the simultaneous high- and low-speed warnings. This is a recurring theme in many of the pitot-static scenarios discussed. During these events, crews forget that the high-speed warnings are triggered by indicated airspeed, and the low-speed warnings by angle-of-attack. 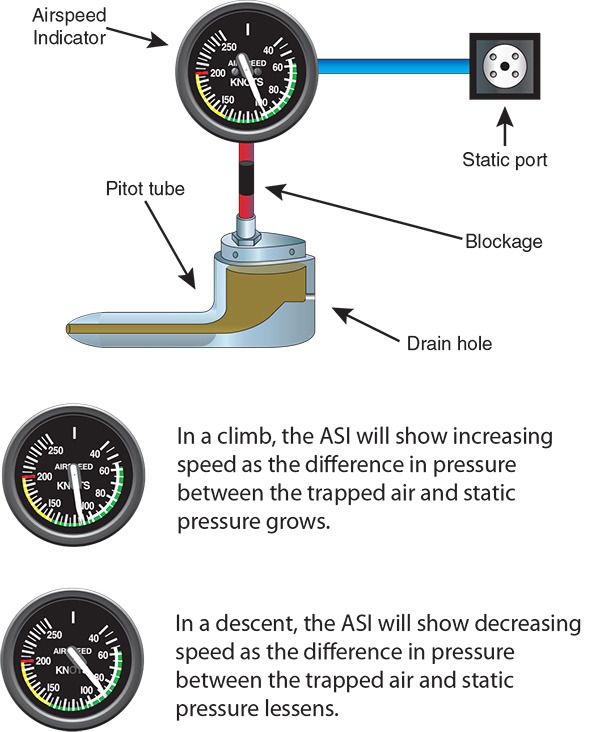 In the pitot-static system blockage depicted above, the line from the pitot tube to the ASI is blocked. This has the same effect as if both the pitot tube and the drain hole were blocked: air in the ASI is trapped. In this scenario, a climb will present as increasing airspeed; in a descent it will decrease.

At least on takeoff, this blockage will present as if the pitot alone is blocked. No change will be noted on the ASI regardless of whether actual airspeed increases or decreases. If the ASI shows anything, it will show a change in the difference between static pressure trapped in the ASI and that of ambient pressure: The greater the altitude, the greater the airspeed indication. As altitude is reduced, the ASI will show airspeed reducing.

The pitot tube may become blocked by ice accretion or internal contamination, such as insects entering during ground stops. When this happens, the pressure sensed by the airspeed indicator (ASI) will register a reduced pressure. The airspeed will usually read low, often zero. This scenario is depicted in the sidebar on page 12. Importantly, other air instruments (altimeters or vertical speed indicators) are not affected.

Similarly, if a pitot tube’s line to the ASI is blocked, or if both the pitot tube and its drain hole are plugged, the air in that portion of the system will be trapped. The airspeed will not increase during the takeoff run. As the airplane climbs, the pressure in the pitot line remains at or near the static pressure at the altitude where the blockage occurred, but the static pressure will continue to drop. This can cause an apparent increase in airspeed and the sidebar at left discusses the outcome.

So far, we’ve mainly talked about pitot blockages, but static ports also may become blocked, although this is rare for those that are fuselage-mounted. The more common cause is covering the ports during maintenance. Given static-port blockage at the start of flight, there will be no effect during the takeoff roll and the ASI will show correct values. Once the aircraft starts to climb, however, the displayed airspeed will decrease while the displayed altitude will remain constant. An airplane flying at 250 knots will have the displayed airspeed decrease to zero somewhere between 2000 and 3000 feet msl.

Depending on the airplane, the pitot-static system also provides data to the autopilot, flight director and other flight guidance and flight management systems. Most transport-category pitot-static arrangements allow the captain’s airspeed and altimeter to switch between the captain’s static line/pitot tube and the standby line and pitot tube. The first officer’s instruments can likewise be switched to standby sources. This allows the crew to compensate for a single pitot tube or static port problem.

However, EFIS-equipped GA platforms likely will have a set of backup “round” instruments installed—an airspeed indicator, an altimeter and an artificial horizon. The first two instruments work off the pitot-static system while the artificial horizon will be operated electrically or by an engine-driven vacuum pump. In addition to providing data sources for the flight instruments, whether mechanical or electronic, the pitot-static system also may provide data to the autopilot, flight director and autothrottle, if any. Different airplanes have different arrangements, and an early model of an airplane type may have completely different system architecture and redundancies from the latest model with all the options.

Many airplanes do not show an indication of airspeed or altitude disagreement—such a warning system basically is unheard of in a GA airplane. Instead, the single pilot bears the burden of comparing the instrument indications with performance expectations. For example, can this Skyhawk really be accelerating as it climbs 500 fpm? That’s unlikely, so the problem becomes a diagnostic one. 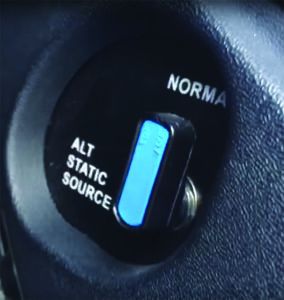 The details of these mishaps break down into how well the crews recognized the indications for what they were. In many instances, it was not clear what was happening. Attempts to isolate the “failed” systems appeared ineffective because the selection logic for airspeed/altitude input to autopilots or flight directors had not been clearly stated.

The confusion as the airplane climbed higher is evident in these mishap reports. In the stress of the situation, the pilots seemed to forget that overspeed warnings are triggered by airspeed (or Mach) indications, while low-speed warnings are generally triggered by angle-of-attack. The pilots also did not understand what the effect of changing altitude had on their indications. Most of these crews were flying with top-of-the-line automated equipment; most general aviation crews don’t have that luxury.

Instead, pilots encountering pitot-static problems must first identify the problem, then either change the P-S source or change the control strategy. This is where training and a clear understanding of the airplane’s pitot-static system, along with a capable pilot, is critical.

The good news is that the typical GA airplane and its pilot won’t be confronted with the kinds of multiple system failures or warnings faced by the transport-category airplane crews in the mishaps discussed earlier. Most pilots could describe the symptoms for a given common cause, such as what would happen if the static ports were blocked prior to takeoff. What’s more difficult is being presented with multiple symptoms and then trying to deduce the single cause.

When faced with a difficulty, humans develop a hypothesis to explain the symptoms. There is a tendency for the initial diagnosis to take hold, for the person to seize on corroborating symptoms and to reject those that disagree with the initial diagnosis. In medicine, this tendency is called “diagnosis momentum.”

Pitot-static mishaps are rare. However, it appears that the major problem is diagnosing the multiple, apparently independent symptoms of a common cause. Once the failure is understood, a well-trained pilot should have little difficulty using attitude-flying techniques to maintain control.