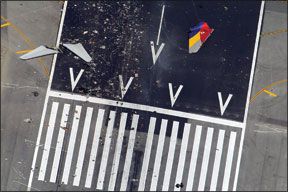 As this is written, the wreckage of Asiana Airlines Flight 214, a Boeing 777 that crashed while attempting to land at the San Francisco (Calif.) International Airport (SFO) on July 6, 2013, is still being examined. The accident was the first on U.S. soil involving a large jet transport since November 2001, and the first accident involving passenger fatalities aboard a U.S. scheduled carrier since 2009. It also was the first involving a fatality aboard a 777.

At this point, the throttles were advanced and the engines responded. However, the aft fuselage struck the sea wall approximately 500 feet from the Runway 28L threshold, shearing off the empennage at the aft pressure bulkhead. Parts of the airplane, including the vertical stabilizer, both horizontal stabilizers and main landing gear wheels, are seen below in an image of wreckage distribution near the runway’s threshold. Presuming these preliminary indications are accurate, this accident appears to have resulted from…well, you can draw your own conclusions.

At this point, I normally would write something to the effect it will be months before the NTSB has sifted through the evidence and determined a probable cause. However, the NTSB has seen fit to make public its preliminary findings via Twitter. In my experience, this is new and different behavior for the Board, which traditionally has kept such information under tight control. I hope this isn’t an indication of things to come and that all information involving an accident will be considered before this type of material is released to the public.