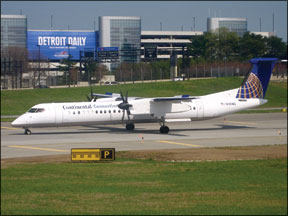 The NTSB recently issued its finding of probable cause in the February 12, 2009, crash of a Colgan Air Inc., Bombardier Dash 8-Q400, operating as Continental Connection Flight 3407 while on approach to the Buffalo-Niagara International Airport in Buffalo, New York. All 49 aboard, plus one person on the

ground, died when the regional turboprop entered a stall and the flight crew failed to recover.

To a total lack of surprise among those following the aftermath of this tragedy, the Board found the accidents probable cause to include a litany of failures in the cockpit and Colgan Airs procedures involving airspeed control in icing conditions. The NTSBs report included 46 conclusions and resulted in 24 recommendations to the FAA.

Yes, this captain ran an unprofessional cockpit, engaging in non-essential conversation with the first officer, including at times when the sterile cockpit rule should have been enforced. Yes, the captain had an uneven training history and, ultimately, was manipulating the controls at the time of the crash. Meanwhile, the first officer was obviously fatigued-and possibly ill-and probably should have grounded herself that night. Clearly, any time a perfectly good transport category airplane is allowed to slow to stick-shaker speed and the exact wrong control input is made, theres something askew in the cockpit.

But these two crewmembers were fairly representative of personnel present on the flightdecks of many scheduled turboprops in the U.S. these days, and arent that far removed from those flying regional jets, either.

Well before the NTSBs report, Congress had to get into the act, with proposals to mandate a minimum number of hours for pilots crewing scheduled passenger flights. While a somewhat admirable goal, the fallacy is a minimum number of flight hours doesnt make a safe or proficient pilot. As an example, the U.S. military turns out highly proficient pilots with between 300 and 500 hours and gives them multi-million-dollar jets, while wed all hesitate to give even a piston twin to the 500-hour guy flying banners down at the beach.

To his credit, FAA Administrator Randy Babbitt pointed out to Congress the folly of establishing such minimums. “Raising the quantity of hours without raising the quality and nature of the time…may not ensure the improved proficiency we all want,” Babbitt told the Senate Commerce, Science and Transportation Committees aviation subcommittee.

Ultimately, the U.S. airline system gets the quality of pilots for which its willing to pay. Many changes may be necessary in regional pilot training and scheduling, but mandating a minimum number of hours isnt one of them.