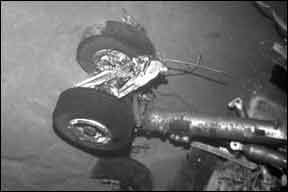 As we put the final touches on this issue, searchers ended their efforts to retrieve bodies and wreckage from Air France Flight 447, an Airbus A330 flying from Rio de Janeiro to Paris, which disappeared over the equatorial Atlantic Ocean in the early morning hours of June 1, 2009. All 228 passengers and crew died in the accident. This May, searchers using deep-sea equipment found the wreckage after three other expeditions failed. They retrieved the all-important cockpit voice and flight data recorders and, amazingly, the information stored in them for almost two years under

Unfortunately, the picture painted by early, official reports on what the CVR and FDR contained isnt confidence-inspiring. After losing all airspeed indications-presumably when the A330s pitot tubes became clogged with ice at high altitude-the jets computers decided to disengage the autopilot and autothrottles and present the crew with a cascading series of error messages and warnings. Boiling it down and omitting details on weather, systems failures and the extent to which the A330s automation was offline, the French equivalent to our own NTSB, the Bureau dEnqutes et dAnalyses pour la scurit de laviation civile, or BEA, is saying the crew zoomed the airplane from its FL350 cruising altitude to around FL380, stalled and failed to recover it during the three-and-a-half minutes it took to descend all the way to the water below. That translates into a descent rate greater than 10,000 fpm.

Its hard to imagine the three-pilot flight crew failing to recognize and recover from a high-altitude stall, but thats what happened. Its also hard to imagine why a relatively simple loss of airspeed indications would result in the airplanes automated systems blanking out various critical flight instruments, including standby systems Again, though, thats what happened, at least according to the BEAs interim report. Well have to wait for the final report to learn more details about what the crew had to work with-and what they didnt have-before the industry can take steps appropriate to preventing a similar occurrence.

But the basic facts of this accident-a simple lack of airspeed information leading to failed automation and an international flight crew finding itself unable to recognize and recover from a stall-should be a game-changing event for the industry. This applies not only to long-haul jetliners but also how we equip and fly personal aircraft.

Its easy to say Flight 447 presented a one-in-a-million set of circumstances. But it did, and the results werent desirable. The lessons well be learning from this accident will apply to everything we fly.