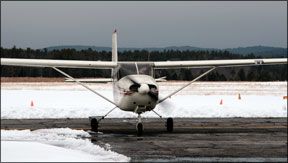 Its that time of year when the IFR pilots primary aviation weather concern finally shifts completely from thunderstorms to airframe icing. Even if weve been forced to consider both hazards on the same flight, we probably can leave the thunderbumpers by the wayside for a few months.

In truth, we should always be concerned about airframe icing, depending on the

altitudes at which were flying. But winters onset doesnt mean airframe icing is the only operational concern we might face.

In last months issue, Mike Gugeler tackled the topic of runways contaminated by rain, snow, slush, ice or a some evil combination. This month he serves up a detailed discussion on preheating. As Mike demonstrates, thinking about the whole airplanes preheating needs is not just a good idea, its also a significant safety consideration.

Since theres less daylight this time of year, the active pilot will have more opportunities for night landings. Meredith Saini serves up some great tips pilots should consider when contemplating night landings, perhaps for the first time in a long time.

With winter in mind, Tom Turner this month gets up close and personal with a wide variety of experienced operators regularly forced to deal with airframe ice. Theyve lived to talk about it by keeping some basic rules in mind.

One of those rules is to start working to get out of an icing situation the moment you realize youre in one. This is true even if what youre flying is approved for flight in known icing. Every second you wait, more ice is accreting to your airplane, changing the airfoils shape, adding drag and weighing you down.

Winters colder air and clear skies can mean some excellent flying weather, along with improved performance. But without adequately preparing both the airplane and the pilot, it can bite.

In early November, the U.S. Department of Homeland Security (DHS) released a fact sheet saying it was developing a long-term strategy intended to enhance international and domestic general aviation security by “identifying and vetting passengers and crew on international GA and private aircraft prior to entering and departing U.S. airspace,” among other new security measures. The DHS already has a proposal in place to require electronic manifest transmittal a minimum of one hour before a GA flight takes off, when either entering or leaving the U.S.

Already, DHS has proposed an information-collection scheme for airline travelers amounting to requiring the governments permission before traveling domestically, internationally or merely when overflying the U.S.

With all this attention to additional aviation security, can a much tighter rein on GA be far behind?