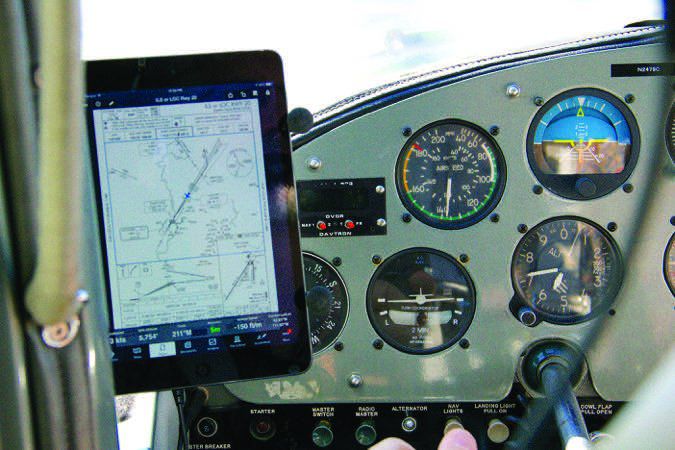 When the curriculum gets around to risk-management topics, one of the hazardous attitudes we learn about in ground school is invulnerability. The thing is this trait isn’t necessarily about feeling as if we ourselves are bulletproof, but rather the notion that bad things happen to people other than ourselves. I have been a victim of this more than once. Don’t worry—no sheet metal was bent.

The aviation pitfall to which I most recently thought I was immune was becoming a slave to technology: Surely that couldn’t be me! I fly a Piper J3 Cub that doesn’t even have a starter. My other airplane is a Cessna 180; both have tailwheels, which were on their way out in WWII. I hand-fly my IFR because I don’t have an autopilot. Of all pilots, I am not a slave to the magenta line. Au contraire! Not only did I discover recently that I was an addict, I was also both a junkie and a pusher.

As many readers likely know from my earlier articles on gadgets in the cockpit (e.g., “Gadget Flight Rules,” February 2013, and “Gadget Flight Rules 2.0, February 2015), I am an early adopter. I loves me some gadgets, and I went to a paperless cockpit a long time ago. That’s how and where my addiction began. By flying with my gadgets, I have all the charts, plates, chart supplements, legends and even the FAR/AIM at my fingertips. Not only that, I’ve gotten pretty good at navigating an electronic flight bag (EFB) app and can find the frequencies for MOAs or the legend for symbols on my approach plates, both of which can be easy to forget about and hard to find when going all-electronic.

To inoculate myself from the curse of the magenta line, I have gone out of my way to set up my 180’s Garmin 430 in a way that I mostly rely on the data screen that shows my desired track and current track. I hand-fly IMC by keeping those numbers together rather than keeping the magenta line straight.

Recently, I started flying for money. Different aircraft types, different avionics, new airports. And a whole new management style, thanks to FAR Part 135. And I had to do a lot of it without my iPad and its EFB app. It wasn’t long before my new boss laughed a bit at my loss of “my precious,” referring to my iPad like it was the one ring to rule them all.

Regardless, because I had “inoculated” myself against any addiction to gadgets, I went into this thinking my instrument flying skills would get me through. And when I sat down at an old 1980s-era analog simulator that used cassette tapes for media, I figured I would be able to ace it. I did not. I couldn’t even enter a hold correctly.

I quickly discovered the problem: My inability to mentally fly the needles. When I had to enter a holding pattern using the needles alone, I found my brain had simply atrophied. Those synapses were replaced by my ability to hit the suspend button and enter the hold as displayed on “my precious.” I was almost useless.

Like many addicts, this is how I realized I was in denial. My addiction to moving maps, digital displays, little blue airplanes and magenta lines was so complete, I was a mess when trying to kick it old school and fly needles-alone on that 1980s simulator. Don’t think you need to be ready to fly like it’s the 1980s? Just give yourself an electrical failure and you will be in the Victorian era.

Back to the Basics

Mentally, we all likely learned from the same old-school system of building paper flight logs that take us from VOR to VOR using headings, wind correction angles and shooting cross-radials to identify checkpoints and compute groundspeed. We scribbled notes on charts and—yes!—diagrammed holds and their entry. I think it is easy to find these systems quaint in light of the incredible situational awareness that comes with our digital devices. But it’s a zero-sum game: In the bargain of embracing the paperless cockpit we often give up the ability to regularly exercise our analog thinking skills.

I deluded myself into thinking I was still sharp as a tack because I try not to fly the magenta line and I don’t have an autopilot. But ii isn’t just the colorful lines and reliance on George that creates the addiction. It’s also our ability to look at a heading and know with metaphysical certitude the direction we should be going. To think through our next turn and know which way the compass or DG will swing and when to expect the needle to lock into place, capturing the localizer.

I am now flying Part 135, and it takes time and energy to modify the company’s operations manual to include digital devices and get the FAA to approve it, so I went back to flying with paper charts and printed approach plates. This is when I realized it is way easier to fly a geo-referenced plate on my iPad. By doing so for so many years, my ability to fly with paper was very dull.

Going back to a paper-filled world has shattered my illusions of competency. It also has made me realize that flying needles is a worthwhile skill, and relearning and reprogramming those lost brain cells is making me a better pilot, enhancing my ability to fly a greater variety of planes.

Do I miss my iPad as an in-flight aid? Absolutely. Don’t get me wrong, it is still with me. I still use it for weather, filing my flight plan and keeping my logbook. It remains one of my most valued aviation tools. I find it particularly useful for navigating taxiways at big airports and seeing the hotspots.

That said, I don’t get separation anxiety when it is still in my flight bag and out of reach when I take off. I have learned to be comfortable using other cues to know where I am. Will I be seeking a change to the company manual to eventually include iPads in the cockpit? Absolutely. I still think the situational awareness one gains is a huge safety value. But so is the lost skill of living without it.

So here is my challenge. If you have become addicted to your EFB so much that it is your “precious” you cannot imagine flying without, you need to join my twelve-step group. My name is Mike and I am an iPadaholic, but I am learning to love paper again, and that is a good thing.

Mike Hart is an Idaho-based flight instructor and proud owner of a 1946 Piper J-3 Cub and a Cessna 180. He also is the Idaho liaison to the Recreational Aviation Foundation.