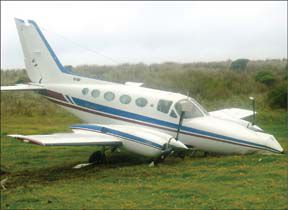 Its something any of us face every time the wheels leave the ground: Something happens-probably beyond our control-and when the airplane comes to rest, it cant be flown again. Whether a gear-up landing, an engine failure or a cautionary off-airport landing, the airplane is damaged.

Now comes what many consider the hard part, a task for which few of us are trained: The aftermath of bending an airplane. Depending on the circumstance, you could be blocking a runway at a major airport, with anxious crews hovering with a tractor to drag your precious bird out of the way.

Well-meaning standers-by may have much advice, but little experience. And then theres local law enforcement, the FAA, the NTSB and even the local media, all of whom have competing-and often conflicting-interests. Last, theres an insurance company to be notified, with its own set of questions.

How will you deal with all of this? How will you prioritize? What should you avoid? To get some answers, we talked with an aviation attorney, an insurance representative and a few pilots who had the misfortune to find themselves needing answers. Heres what we found.

First Things First
Its natural to be a little shaken up after pranging your airplane, but this is not a good time to go sit in a corner. Youre the PIC; you still have some responsibilities.

Obviously, the first and most important thing you need to do is make sure you and your passengers are out of the airplane and okay. You and they should be gathered together several yards away from the airplane-if fuel is leaking, or if you even think theres a fire danger, the more distance, the better.

You should have switched off everything and turned the fuel selector(s) to their off position before exiting the cockpit, but you cant think of everything. Unless theres a pressing need to re-enter the airplane, dont touch any switches for an hour or so after the event-even turning off the master switch you forgot could generate a spark and ignite fuel vapors.

While survival and triage are beyond the scope of this article (see Post-Crash Care, Aviation Safety, September 2005), an off-airport landing usually means youll need to assess how to get back to civilization. Hopefully, your cellphone works, or theres a real telephone nearby.

Most likely, though, youre on or near an airport. If its a larger one, youre probably already surrounded by crash-fire-rescue vehicles and personnel. Even if youre not, someone else is probably already asserting his or her control of the situation and poking around your airplane. Dont let them.

Slow Down
As you will come to fully understand as you deal with the paperwork from this event, youre still the pilot-in-command of the aircraft. What next happens to it and around it remains your responsibility until it is either safely parked in a hangar or repaired and flown out of whatever field you put it into. Within obvious limits, your authority supersedes that of just about anyone else, including the county sheriff, the local cub reporter/photographer, the airport manager and the airport hangar rats. One of the keys here is simply to take some time and think through what you should do next.

Aviation attorney and Aviation Safety contributor Rick Durden echoes those sentiments, saying, The average gear-up landing isnt reportable, even to the NTSB. Pilots shouldnt buy themselves problems by phoning it in.According to Durden, the only federal-level notification of any aircraft accident or incident is to the NTSB (see the sidebar on page 22), although various state laws may apply. Airport managers, on the other hand, may be trying to comply with local requirements-like the airport operations manual-when they call the FAA. Since theres no federal requirement for such a report, and the manager may be more interested in re-opening the runway than further damage to your plane, he adds, In this situation, pilots should grab the airport manager and say slow down.

What goes for reporting your fender-bender also goes for moving the aircraft. Durden relates the tale of a Cessna Citation bizjet that landed gear-up somewhere. The damage was minimal-until airport management decided they had to move the airplane. Somebody grabbed a forklift with the idea of lifting the fuselage. Instead, they poked holes in the fuselage, substantially increasing the cost of repairs.

Instead, Durden believes, the first call you should consider making is to your insurance company. They may have some valuable suggestions for you, as well as instructions on what to do next with respect to securing the airplane and preventing further damage. Keep in mind, of course, that in an off-airport situation, securing the airplane from theft or vandalism-perhaps by making a polite request of local law enforcement-can be more important than from additional damage. If you follow the insurance companys instructions on securing the airplane, they cant come back to you and say additional damage was your fault, Durden adds. With the price of modern avionics often equaling that of the airframe, we think this is good advice.

Also, Durden strongly advocates documenting the scene. Pilots probably carry a digital camera with them, anyway; nows a good time to use it. Take pictures of the airplane and its environment. Maybe eight close-ups from different angles as you walk around the aircraft. This shows the airplanes condition. Then step back for a wider angle and do this again. Youll end up with documentation of the airplanes condition and the environment, he says.In fact, buying a disposable camera and leaving it in the airplanes glove box for just such an unfortunate event is not a bad idea.

One of the perennial questions involving FAA inspectors and local law enforcement has to do with document production after an incident or accident, according to Durden. Of course, a pilot must present his or her airman certificates-including a photo ID like a drivers license-to either the FAA or local law enforcement on request, as well as the aircrafts registration.The pilot must retain possession of those documents, however. Any further documentation, like logbooks, or an interview with local, state or federal officials can wait. The immediate aftermath of an accident or incident is the worst time to give an interview on what happend. Regardless of your physical condition, youve suffered some emotional trauma and youre not at your best, Durden adds. Politely but firmly say so. Give yourself some time to bounce back from the event before talking to any officials about what happened.

What Insurers Want
What about your insurance company? What do they suggest you do in the immediate aftermath of an accident or incident? Not surprisingly, the aviation insurance professionals with whom we spoke had similar advice. See the sidebar on page 20 for a checklist of sorts put together by USAIG and available on the companys Web site.

To get another perspective, we spoke with Gregg Pike, executive vice president of CTC Services, a company serving as Avemcos claim administrators.

Pikes take is that once the airplane is on the ground and everyones safe, the thing to do next is try to prevent additional damage. Especially when considering an off-airport landing and moving a non-flyable airplane to a maintenance shop, Use people accustomed to moving aircraft. Theyll likely have the equipment, experience and insurance to handle the job, he says. Whatever you do, dont use a local auto towing company to move an aircraft out of an empty field.

Common mistakes Pike sees include, unsurprisingly, delays in notifying the insurance company and attempts to fly repaired aircraft from an unprepared field. Another point he stresses is to avoid leaving the airplane unprotected, either on or off an airport. At an airport, get professionals to move the airplane into a hangar or to a well-lit tiedown. When off airport, try to get local law enforcement to watch the site; sometimes the insurance company will handle this themselves. Even if some professional keeps an eye on your bird, consider removing the avionics and putting those boxes, along with the paperwork, in a safe place.

According to Pike, decision making after an accident or incident is really not that complicated. Just use common sense, he adds. If something doesnt look or sound right, dont do it; and dont let anyone else do it. This includes when Darrell and Darrell drive up in dueling tow trucks to drag your pride and joy off the runway. Plus, theres usually no rush. Most things we see dont require immediate attention. Dont be rushed into things by local officials.

Aftermath
Hopefully, youll never need any of this advice. But stuff does happen. In fact, the vast majority of what well call events merit neither a call to your insurance company or NTSB notification. The average swallowed valve or engine failure doesnt deserve that kind of response; neither do most gear-up incidents. In fact, the NTSB rarely wants to hear about something as mundane as a gear-up landing.

Still, its a good idea to think about how you would handle the immediate aftermath of something more dramatic and without injuries. The best way to prepare, of course, is to keep tabs on maintenance, polish your skills, watch the weather and adopt good cockpit procedures. That way, there wont be an event to worry about, and youll never have to put all of this to the test.

Also With This Article
“Accident/Incident Checklist”
“After The Gear-Up”
“Who Ya Gonna Call?”