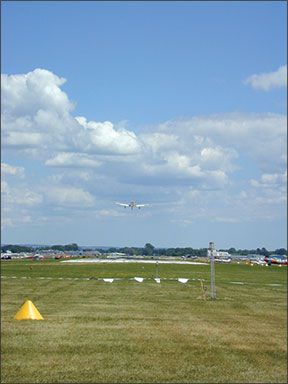 I swear it happens at every fly-in I attend. I’m approaching the airfield at the recommended airspeed and altitude, following a ground track that was clearly delineated in an airshow-issued notice (sometimes an FAA Notam at larger gatherings) and I’m listening—not talking—on the designated frequency for the show, when a random pilot pops up and announces that he’s “a-comin’ in!” This guy (or gal—I’ve heard them both) knows nothing of any special procedures for the show. He may not even know there is a show going on. He just wants to land, perhaps for a bite at the terminal café, and be on his way.

He’s typically talking on the CTAF listed in his GPS database or sectional chart. Unfortunately, that’s not the frequency all the show arrivals are monitoring (that’s in the Notam or show notes he did not obtain before takeoff). Fortunately, the temporary tower controllers are monitoring the CTAF and suggest that our errant pilot remain outside Class D until figuring out the Notam/show arrival procedure, so he can sequence his craft into the line-up for the landing runway. Most often, the flummoxed pilot goes away. I’ve heard the pilot ask a controller to read him the Notam over the frequency—yes, at AirVenture! Occasionally, the pilot ignores all the good advice and barrels in to land anyhow, creating minor chaos in the pattern while the tower sends aircraft around and then has to work them back into the arrival.

Do that at a community show and you might get a slap on the wrist. Violate a Notam, or even a TFR (yep, I’ve seen aircraft arrive right in the middle of an airshow performance), and you could see the FAA striding over to your aircraft even before its prop stops swinging. And no, they aren’t there to help you push the aircraft into a parking spot.

Step One: Research
Honestly, the simplest way for you to avoid being the clueless pilot in the airshow arrival pattern is by always, always checking Notams for your intended destination. Doing so is not only required by the FARs, it’s good operating practice, too. Notams, TFRs and even a quick phone call to the airport or a check of its Web site before departure also should be part of your pre-flight routine. None of these actions take much time, and in these days of cheap and easy communications technologies, smartphones and tablets for the cockpit, they shouldn’t be foreign concepts, either.

A couple of caveats, while we are on the subject of Notams and TFRs. You might not know that the FAA databases for such critical information is not updated on the weekend (thank you, budget cuts). The good news is that most airshow and fly-in Notams and TFRs are put into the system well in advance, and can be easily pulled up a couple of days before the event with DUAT, Foreflight, WX7Pro, Fltplan.com and other commonly used pre-flight products. You can call Flight Service as well and talk to a briefer, but you need to remember to request Notam information. You also can go straight to the source for Notams at the FAA’s PilotWeb portal (pilotweb.nas.faa.gov/PilotWeb/) and TFRs (tfr.faa.gov) to see what’s listed for your route of flight from your smartphone, tablet or computer, usually from the cockpit before turning the engine.

Unfortunately, you won’t find airshow Notams with the kind of detailed arrival procedures you need at those sites. You should find them there, I know, logic follows that you would, but I’m telling you, as of this writing you will not. You won’t find them through your magic apps on your tablet, either. That’s why you need to go to the actual airport or event site online, or call the airport directly. You can find the Web site link and phone numbers on an aggregate site such as Airnav.com. A good FBO, event manager or airport manager will email or fax you the information, or direct you to where you can download it to a computer, tablet or smartphone.

Even the smallest shows seem to have arrival patterns these days. For instance, the Triple Tree Fly In, in Woodruff, S.C., activates a private tower for the event each September. The airport’s Web site—www.tripletreeaerodrome.com—has all the information you need, including hand-drawn maps and aerial photos of the proper arrival route, frequencies to use, parking and more.

Step Two: Study!
Once you’ve got the special procedures in hand, study them. Most segregate fast traffic from slow traffic by altitude on the arrival. Decide which you’ll be, as some aircraft can play either way. A few of the larger shows also segregate traffic by whether you are an ultralight or a warbird. A word to the wise: Don’t try to turn your aircraft into something it isn’t just so you can take advantage of one of these special arrivals. I’ve seen more than one LSA waved off the ultralight field at Sun ‘n Fun. Getting back into the arrival lineup for the main show runway isn’t always so easy. And coming in IFR usually won’t buy you any special treatment, either: You’ll often have to fly the VFR arrival, anyway.

You might want to program the arrival into your GPS or tablet app, and that’s fine. But understand that as you fly toward the arrivals marshalling point, so are a whole lot of other aircraft. Don’t focus on arriving directly over your point so much as in identifying relevant traffic and working to synch, sequence and flow into the intake pattern from an angle that makes sense. I love TCAS or ADS-B for this—you can often see the flow of transponder-equipped aircraft from 35 miles away, which gives you time to sort out an arrival strategy. Just understand that you are only seeing the aircraft with working transponders. Keep an eye out the window for the others—and believe me, they are there.

Step Three: Practice!
The third prong in your effort not to be “that guy” at the fly-in is arrivals practice. It would be a shame to do everything right getting into the arrivals procedure just to botch your landing in front of a discerning crowd of your peers. It happens far more often than you’d think.

For one thing, you’ll be flying in close proximity to other aircraft, which can be decidedly unnerving if you haven’t done much of that. Oh, and these aren’t necessarily pilots who have practiced formation flying, so it may be unnerving even if you are formation-certified. You are well-served to bring along a skilled spotter or co-pilot to watch for landmarks on the arrival and call traffic to you. Sure, you’ll be looking outside (don’t rely on TCAS or ADS-B here), but four eyes, or six, beats two everyday.

As you work your way into the line-up for the field, you might find that the aircraft in front of you is slowing. To stay nose-to-tail, you must slow, too. How good are your slow-flight skills? If you haven’t practiced pulling the power back, pulling the nose up and throwing flaps out in sequence without stalling, then adding enough power to maintain altitude and, say, 75 KIAS, well, now’s the time. Work in a couple of slow-flight turns, while you are at it, and practice flying precise speeds and altitudes (that’s so you won’t be the guy who is driving the pilots behind him mad by oscillating over a range of 30 knots and 300 feet on the arrival).

Once close in to the airfield you’ll need to focus on making smooth, coordinated descending turns to base and final. Know the wind, and know how your aircraft reacts to it. Fly your landing speeds precisely. Now is not the time to see how your crosswind landing or short-field skills have deteriorated from years of disuse. Here’s why.

It is common for fly-ins at airports with long runways to get a waiver to land more than one aircraft at a time on a runway. Sometimes taxiways are recruited into action as parallel runways for simultaneous approaches, and you may be called on to sidestep at the last moment from one runway to the other, then asked to plop your wheels halfway down on a big blue dot, then expedite your taxi to a specific turnoff.

Your risk of having to go around for another approach is high in these circumstances. Maybe the approach destabilizes, or the guy in front of you didn’t perform, or wait, who is that guy and what the @#$! is he doing!
Pilots arriving for shows encounter it all. Force-ons (Oh, the bouncing! The porpoising!) and drop-ins are common airshow landing bloopers. And stalls on short final? Killers. The best medicine for preventing bad arrivals is heading out to practice slow flight in the pattern, slow, descending turns and short field landings in varying wind conditions. (For some suggestions on how to prepare, see the sidebar on the opposite page.) Be sure to throw in a few go-arounds, too. If your destination is turf, practice your grass landings, as well.

Putting It All Together
Sound a little scary? Don’t be intimidated. Fly-in gatherings are the feel-good, energy-giving lifeblood of general aviation, lending purpose to so many flights over the course of a season. And for the most part these events come off accident-free. Yet, that safety record does not come without effort, both on the part of the event organizers, and the pilots attending.

I’m living proof that these shows can be flown into and out of regularly with complete safety. I’ve survived dozens of fly-in airshow arrivals across more than 35 years of flying in aircraft ranging from light taildraggers to a DC-3. I’ve flown into the biggest and the smallest of shows, and experienced being in the pattern with pilots showing great skill, and a few who, well, didn’t show much skill at all.

“That guy” is an outlier who makes all of us look like amateurs. We may not be able to completely weed him/her out, but I know this: I don’t intend to be “that guy.”