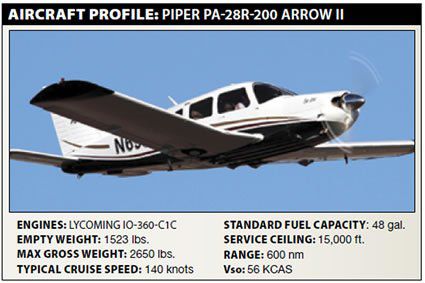 Every now and then, we come across an accident report that makes us wonder what we would have done differently, and when. Usually, the answer is fairly clear-cut: Do exactly the opposite of what the accident pilot did. Sometimes, though, its not nearly so clear-cut, and we find ourselves wondering if we had been in the left seat, would we have done as well.

Were not sure the accident described here meets that criterion, since we dont know the airplanes condition during the flight, nor do we know much about the weather other than whats in the NTSB report. We do know we would have been monitoring our fuel supply more closely, and likely would not have used it up shooting approaches to airports below the procedures minimums. Divert early and often is something of a working motto, one thats served us well over the years. But we can see how we or anyone else might get into a similar situation as this months accident pilot.

Background
On January 13, 2013, at about 1845 Eastern time, a Piper PA-28R-200 Arrow II was substantially damaged during a forced landing following a total loss of engine power. The solo private pilot was fatally injured.

Night instrument conditions prevailed; the IFR flight plan from Kaolin Field (KOKZ) in Sandersville, Ga., to Summit Airport (KEVY), Middletown, Del., estimated an en route time of 0345, with 0530 of fuel available. The pilot filed 5000 feet msl as the cruising altitude and listed Baltimore/Washington International Airport (KBWI) as the alternate. Records indicate the airplane was filled with fuel before departing on the accident flight at about 1330. It was IFR equipped, with a Garmin GNS430W and an S-Tec 30 autopilot; the pilot carried a Garmin 796 EFB.

Three-plus-seventeen later, at 1647, the flight was being worked by military controllers at the Dover (Del.) Air Force Base (KDOV). As the Arrow descended for a GPS approach to KEVY, ATC advised that a previous airplane executed a missed approach due to weather, then flew another missed approach at nearby Wilmington, Del., before diverting yet again. At 1649, the pilot requested an approach at the Salisbury (Md.) Regional Airport (KSBY), which was reporting a 400-foot ceiling with eight miles visibility.

The pilot then attempted two GPS approaches at KSBY, performing a missed approach both times. More than an hour later, at 1753 and after the second missed approach, the pilot diverted to the Sussex Country Airport (KGED), Georgetown, Del., which was reporting a 700-foot overcast. At 1801, when the pilot was cleared for an approach at KGED, ATC advised that updated weather at KGED featured an overcast at 300 feet. The published minimum for the LPV approach flown was 310 feet agl. The pilot flew that approach to a GPS altitude of 250 feet and at 1826 reported a missed approach, requested the same approach again, and advised that he was running low on fuel. The airplane had been airborne almost five hours.

The controller suggested Delaware Airpark (33N), Dover, Del., as a divert airport, noting it had 10 miles visibility under a 500-foot overcast, the observation at nearby KDOV. At 1835, the pilot was cleared for the VOR Runway 27 approach at 33N. At 1841, the pilot declared an emergency-he was out of fuel-and ATC provided vectors for the ILS Runway 19 at KDOV. At 1843, ATC advised KDOV was at 12 oclock and six miles, which the pilot acknowledged. At 1844, ATC updated the airplanes position, which the pilot also acknowledged. That was the last radio contact. At 1845:33, recovered GPS data recorded the airplane at 500 feet and on an approximate three-mile final for Runway 14.

Investigation
The airplane impacted several trees and came to rest inverted in a wooded area about two miles from KDOV. The wings and fuselage were substantially damaged; there was no post-crash fire. Both main fuel tanks were compromised. No fuel was observed in the right fuel tank; approximately gallon was seen in the left tank. No pre-impact mechanical malfunctions with the airframe or engine were discovered.

From 1300 to 1600 or 1700, the destination forecast included two miles in mist and an overcast at 3-400 feet. The forecast from 1600 to 1900 at one station included six miles in mist and a broken ceiling at 1200 feet. From 1700 to 2200, another stations forecast predicted greater than six miles visibility and a broken ceiling at 3000. Those forecasts made KBWI a legal alternate. Observed weather in the area between 1600 and 1842-including KBWI-was never better than 400 feet overcast, however, with visibilities varying from eight miles to mile. Approaches available at area airports were either GPS- or VOR-based, and featured minima as low as 200 feet, although most were either near or above reported ceilings. At least one ILS approach was available at KSBY, with others at KBWI and KDOV.

The Arrows documentation states it burns 9.16 gph of fuel at 65-percent power, or 48.09 gallons for 0515, not including takeoff or climbing on a missed approach-almost exactly the elapsed time between takeoff and its last recorded position.

Probable Cause
The NTSB determined this accidents probable cause to include, The pilots failure to land the airplane at multiple airports that were equipped with adequate instrument approach procedures while operating in low instrument meteorological conditions and his delay in declaring a fuel-related emergency, which resulted in a loss of engine power due to fuel exhaustion.

The pilot flew three approaches, missing them all, in the two hours after arriving over his destination. Then, he ran out of gas, waiting until the engine quit from fuel exhaustion to declare the emergency. Yes, this pilot made a number of obvious mistakes, and could have changed the flights outcome in several ways.

Among them would have been to stop en route and refuel, especially if it became apparent the forecast was a bust and the forecast clearing trend wasnt developing. Another way to have changed the outcome would have been to divert to a nearby airport with above-minimums weather rather than make multiple attempts with poor chances for success. Even if the good-weather airport was an hours flying time away, if the diversion began after the first missed approach, we wouldnt be writing about it. A final thing would have been to at least declare minimum fuel when there was only an hour or so remaining, then an emergency as things became more dire.