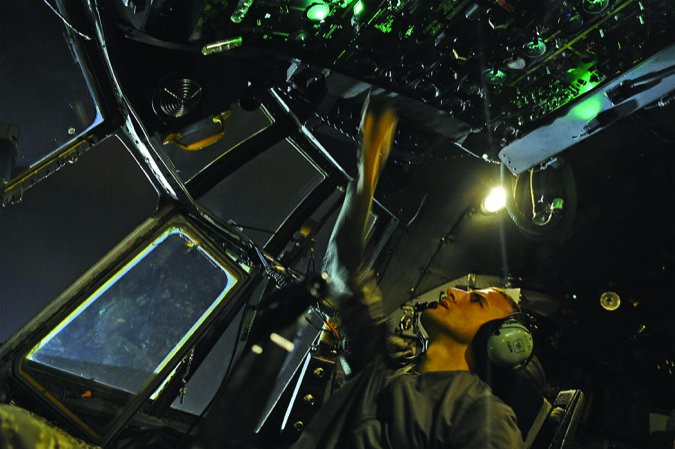 Stuff happens. One minute the engine may be purring like a kitten, the next it can be coughing up a hairball. Pilots who react well to such challenges often credit their training, applying the instincts honed by indoctrination without the need for excessive thought. How does that happen? Most pilots regularly practice simulating an engine out, picking a field and pitching for best glide. That is one scenario to be ready for, but emergencies come in many forms, and your preparation in advance will pay off when that time comes.

I recently signed off a flight review for a non-instrument-rated pilot who flies in mountains that often have bad weather. He impressed me with a seamless and nearly-instinctive 180-degree inadvertent cloud encounter/escape. I’d asked him to assume he was in a canyon with a limited turning radius, and without hesitation, he noted his heading, added flaps, slowed his airspeed, entered a turn and rolled out precisely on the opposite heading. It was well-executed because he had practiced the procedure, his own form of kill-proofing, on his own.

In an emergency, we fall back on our training, our procedural memory. But as numerous studies have shown, it only counts if we physically practice to the point our actions are second nature, even instinctive. As the saying goes, training loads the gun, but practice is what pulls the trigger. We have to actually go through the physical motions for the neurons to get properly wired.

Many of us have limited practice time (and money), so it makes sense to focus on the most common emergency scenarios applicable to you and your aircraft. I would start by looking up accident reports for the particular airframe you are flying and identify its failure modes. If you chair-fly your emergency checklist procedures for the most common scenarios, you can wire them into your brain for the day you need them.

When I bought a 182, I went to the NTSB web site (www.ntsb.gov) and read accident reports to learn about the airplane’s mechanical and design weaknesses. I also found a great report on 182s prepared by the AOPA Air Safety Institute. I learned that carburetor icing was one of the common reasons that 182s of my particular vintage fell from the sky. I knew immediately that the location of the carb heat control would be paramount for my own procedural training. Subsequently, whenever I fly carbureted aircraft, I memorize the carb heat control’s location.

I have learned other things. For example, a common failure mode among low-wing airplanes is the loss of fuel flow due to a failed fuel pump. For aircraft with multiple-tank fuel systems, it’s critical to wire in the sequence of turning on a boost pump and switching tanks correctly.

We can ready ourselves for many of these scenarios by mentally stepping through how they would present, lock into memory the appropriate response, and finally practice. And practice, and practice. Memorization is a good first step, but chair-flying is better. Live practice in the aircraft is better still.

The best place to rehearse “what if” scenarios is by sitting in the actual cockpit, where you can touch the gauges, buttons, levers and systems and call out the actions. Chair-flying is a very effective way to wire in your physical responses to the most common emergencies. It is also a cheap way to help you memorize locations of the switches and gauges that are critical for troubleshooting.

Go With The Flow

A common behavioral practice among professional pilots is performing a flow for each phase of flight: pre-takeoff, takeoff, initial climb, cruise climb, cruise, descent, pre-landing, landing, post-landing and securing the aircraft. A flow is simply a systematic scan, often in the shape of a reversed question mark.

We practice the flow to verify the location and status of each system and gauge. However, it also trains us mentally so we become more familiar with the aircraft and the appropriate configuration for each given phase of flight. It is critical for catching common pilot errors, like leaving a fuel pump on when it is time to shut it off, or its corollary, turning it on as part of a pre-landing checklist. Practitioners also rely on the flow and scan as a trend monitor throughout the flight. It’s where we catch engine temperatures rising, anemic fuel flows or ammeters showing discharge.

When your engine coughs, it’s time for a flow. You need to systematically look at things likeengine temperatures, oil pressure, fuel flow or fuel pressure, etc., and then immediately know what that data is telling you so you can swiftly take the appropriate corrective action.

If you have developed good procedural memory that is ingrained through repetition and practice, you’ll know the steps and sequences of what to do next—the locations of the levers and buttons to push or not push, and the ones that need to be cross-checked before engaging.

There is nothing more satisfying than to feel at one with your plane, essentially reading the cockpit by Braille, using your eyes and hands to quickly and automatically glide through flows, checks and procedures. If you build your procedural memory by chair-flying and whenever you fly, it will be there when you need it.

If acronyms or mnemonics are your thing, aviation is the right place to be. From ALSF to ZYC, we all use some form of memory aid—in addition to checklists—to help us keep things straight. Here’s another one you can add to your collection.

Gas.Know all the relevant levers, buttons and gauges well enough that you could switch fuel pump on, change tanks, check fuel pressure and check the fuel gauge from a chair in your living room with your eyes closed. In aircraft with electrical fuel pumps, you’ll also need to know how to check the circuit breakers to ensure electrical fuel pumps are getting juice.

Air.Know how to select an alternate air source, carb heat or the inertial bypass in turbine aircraft. Alternate air is a rarely used system, so it can be easy to forget it exists. It is not a part of most routine flows, so the only way to have it in your procedural memory is to practice the emergency sequence.

Circuit breakers get less attention in our daily flying and scanning than they deserve, which is unfortunate because they are often involved in emergent situations, either as a cause, an indicator or an option for fixing the underlying issue quickly. The problem is they can be—almost always, in my experience—located in very inconvenient places. Sometimes they are not well labeled and if they are, you may need a flashlight, reading glasses and the ability to assume a yoga position in flight.

Take time during preflight to look at the circuit breaker panel and identify the breakers you might need to find fast (fuel, gear, and autopilot first, then avionics, particularly if you have a glass panel). This is especially important while you are getting familiar with a new aircraft or when preparing to launch into the night.

Make time to know where the most important circuit breakers are and understand each breaker’s underlying purpose. The higher the amp load, the more important your knowledge will be. If one has popped, leaving it that way may be the safest option. On the other hand, some emergency procedures and obvious troubleshooting actions might involve pushing a popped circuit breaker back in. For example, if you want to get your gear down, it may be in the procedure to keep resetting until it is down. Many emergency checklists are specific on resetting a breaker, however. For example: Reset the circuit breaker once; if it pops again, leave it alone and proceed to the next step.

I always like to identify the circuit breaker that disables the autopilot because it is not entirely uncommon for an autopilot to try to kill you. If your plane unexpectedly tries to climb or bank aggressively, and the various disconnects (buttons and manual override) do not respond as expected, you should be able to quickly disable the autopilot circuit breaker.

As valuable as it is to develop excellent procedural memories, there are certain actions that should not be done automatically without at least one last visual verification. For example, it would be an irrevocable commitment to grab the mixture instead of the prop, or select “Off” instead of “Both” on the fuel selector without checking first. Twins are particularly notorious for punishing pilots who neglect to verify. Shutting down or feathering the wrong engine has killed more than a few pilots. Feathering a prop is not recommended when it is on the one engine that is still working.

If you haven’t reviewed your emergency procedures in a while, do yourself a favor and chair-fly the top three emergencies you think you might experience. If you are well-practiced for the unthinkable, your neurons will be there to efficiently help you through the crisis.

Use the CIGARS preflight checklist to get in tune with your cockpit and help wire in procedural memory.

– Controls:Place your hands where are they on the airframe and note their locational relationships

– Attitude:Trim and check cowl flaps while not in motion

– Run-up:Where are the levers, switches, etc., you will need for performing a run-up?

– Seatbelts:Switches and Stuff:Now is the time to look around the cockpit for all the various switches, gauges, circuit breakers and more, all the devices you might need later in the flight.

If you are in a rental or commercial fleet, differences training is important. It is not at all unusual for multiple copies of the same aircraft model to have systems controls in totally different locations. I fly a Caravan and have memorized the autopilot circuit breaker location—or more correctly, locations—because it is different in the two different airframes I fly. At top right is the panel of one Caravan, a steam-gauge airplane. At bottom right is the other plane’s panel, which has a Garmin G1000 integrated flight deck. Flight instruments are not the only difference between the two planes.

When you get in the seat of your particular ride, do a quick preliminary CIGARS check to familiarize yourself with the cockpit geography and spot differences in systems. It’s a good time to note physical relationships and groupings. When I do it, I find that physically touching each of the systems helps me wire in my muscle memory. I will even touch the systems I don’t use often, like alternate static source or alternate air source, just as a reminder.

Mike Hart flies his Piper J3 Cub and Cessna 180 when he’s not schlepping people and packages for a Part 135 operator. He’s also the Idaho State Liaison for the Recreational Aviation Foundation.