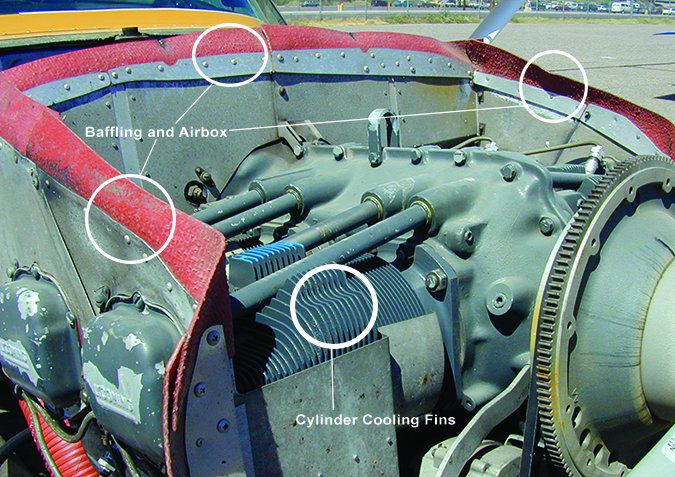 Most of us fly airplanes powered by air-cooled piston engines. I’m thinking of a conventional, horizontally opposed spark-ignition powerplant from Lycoming or Continental, though the big radials also are air-cooled. The popular Rotax 912/914 series uses air to cool some portions of the engine and liquid for the rest. And even if an engine is totally liquid-cooled, it uses a radiator to exchange heat with the ambient air.

Why do we use air as a primary coolant when liquid usually is more efficient, and a liquid-cooled engine can be built to tighter tolerances and greater resulting efficiencies? Air cooling is lighter and simpler than the alternatives, for one. For another, its the same reason submarines aren’t air-cooled—the abundance of air rushing past an airplane in flight provides ample opportunities to shed an engine’s heat. But that’s true only if the air entering an engine cowling is properly managed and directed.

At first blush, one might think the best configuration for installing an air-cooled engine would be to omit a cowling. After all, if the engine is cooled by air and the object is to maximize cooling, wouldn’t you simply want the maximum exposure? The quick answer is no, if for no other reason than the aerodynamic drag an uncowled engine compartment would generate.

Exceptions abound, of course, especially when considering radial engines, which uniquely can be left out in the breeze. Since most radial engines feature only one row of cylinders, there’s no opportunity for a forward-mounted one to block cooling air to one attached at the rear of the engine. Not so with a traditional flat engine, like the Lycoming O-360 pictured below.

Instead, the most efficient way to manage an air-cooled engine’s heat is to implement something called a pressurized cowling. Under this concept, the engine compartment is enclosed by the cowling and internal baffles consisting of sheet metal or other materials and flexible seals are employed to direct the air coming into the engine compartment over the cylinder’s fins. In flight, air is forced into the cowling by the airplane’s forward motion and then is routed in two main directions.

Most important is cylinder cooling, so the baffling is used to create something of a box for the incoming air, preventing it from escaping into the cowling where it’s not needed. To escape the cowling and make room for more, cooler, air, the warmed air is routed down through the cylinder fins and out the bottom of the engine compartment.

The other direction in which air is routed is to the oil cooler. This may be mounted on the front of the engine, on its rear or even in a remote location. Besides lubrication, another function of engine oil is to dissipate heat through.

On some airplanes, cowl flaps are used to minimize drag in cruise and maximize cooling in low-speed, high-power situations, like ground operations or takeoffs. Some configurations pull air in from the bottom and force it up through the cylinder fins, then out the top of the cowling.

Even a basic airplane includes instrumentation advising the pilot how hot the engine is. This may take the form of a gauge reading oil temperature, one providing cylinder head temperature (CHT), or both. Unfortunately, that’s not always a complete picture.

For example, factory instrumentation for many six-cylinder engines is a single gauge monitoring CHT of only one cylinder. Ideally, that gauge measures the hottest cylinder, but without measuring the others, how do you know? Additionally, CHT is not the only temperature with which we should be concerned. Exhaust gas temperature (EGT) also is important, especially when leaning the engine with the mixture control for best economy, best power or high-altitude takeoffs, and the factory may not have installed a suitable gauge.

Recognizing the need for the pilot to have accurate and complete information on an engine’s temperature, manufacturers of newer airplanes usually provide a multi-cylinder monitoring device as standard equipment. Older aircraft can be retrofitted with one like the Electronics International device pictured here, which also provides engine speed and power information, along with fuel quantity and other parameters.

With the exception of opening and closing cowl flaps, if so equipped, how can pilots manage the heat their engine is producing? If it’s too hot, can we do something to cool it down? And if it’s too cold, can we warm it up?

There are two primary methods we can use to manage an air-cooled engine’s temperature: change the amount of air flowing through the cowling or alter the amount of fuel. Operating the engine at a lean of peak exhaust gas temperature setting is an option, but such operations are beyond this article’s scope.

When an engine gets too hot in high-power, low-airspeed situations, like initial climbs or missed approaches, an obvious solution is to reduce power or increase airspeed by lowering the nose. Either of these choices may not be an option when trying to clear obstacles, of course. When they are, reducing power usually is the last resort. Instead, lower the nose to obtain a higher airspeed and allow more air—which now is under higher pressure thanks to the greater speed—to flow through the cowling. Of course, if you have cowl flaps, open them to increase cooling. Aerodynamic drag will increase in the bargain, and maximum airspeed will decrease slightly, perhaps five knots or so.

Enrichening the mixture also can help cool an engine. When enrichening an optimal mixture setting, the additional fuel alters the combustion event inside the cylinders and results in less-efficient (i.e., cooler) operation. Fuel consumption will increase, of course. You may want to use some combination of a different mixture setting and additional cooling air, depending. On the ground, while taxiing or awaiting a clearance, you also may need to point the airplane into the wind to ensure adequate cooling.

How Hot Is Too Hot?

Finally, what’s too hot? The ultimate answer is in your airplane/engine combination’s published limitations, found in the manufacturer’s documentation and on the engine gauges themselves: Don’t operate in the red areas. But a lot of experience has shown that maximum engine longevity can be obtained when a conventional air-cooled engine is managed to maintain cylinder head temperatures of no greater than 400 deg. F. Some operators, myself included, use 360 deg. F as a redline and employ the techniques outlined here to keep them at or below that value.