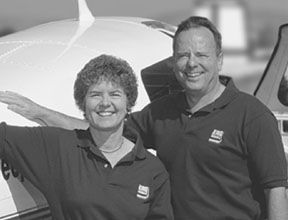 This tense exchange came just minutes before our first and, we hope, only airplane accident.

In the 1970s my wife, Martha, and I traveled around the country teaching two-day ground schools for a living. We were living and breathing aviation. Wed organized our lives to be able to make a living teaching flying. We werent about to ride around the country on the airlines to get to these classes. So we flew everywhere we went in our Cessna turbo-210.

We took great pride in our ability to get utility from our airplane and we flew it like an airliner. We flew day and night in all kinds of weather and over all kinds of terrain. We wanted to show ourselves and everyone else that a general aviation airplane is useful.

Our whole attitude towards risk management changed when we had an accident in that 210. It was a real wake-up call. You might say that from that point on, when it comes to risk management, we became born again pilots.

So I want to tell you about that accident and then what we think we learned from it.

Plan A
Each weekend wed fly out to a different city, like Fargo, N.D., teach a two-day ground school, give the test on Monday, come back to San Diego, do all the things you do when you run a small business, and go out again the next weekend.

This particular trip our class was in Sioux Falls, S.D., so we landed in La Junta, Colo., for our fuel stop. To our credit we got a really good weather update in La Junta, and found the weather in the Sioux Falls area was forecast to be right at a 1,000 foot ceiling and 3 miles visibility. It was VFR, but really marginal VFR.

And so we took off, got on top of the overcast, cancelled IFR, and flew at 11,500 VFR-on-top toward Sioux Falls. About the time we leveled off we noticed that the generator was no longer charging.

This was not good. We thought, Boy oh boy, we really ought to land and get that fixed. But look at the time. Were going to get into Sioux Falls right around dark as it is, and well need to set up the meeting rooms at the hotel.

The plan we developed was to shut off everything electrical in the aircraft and dead reckon to Sioux Falls. Wed keep track of the time, hold our heading and, when we thought we were in the vicinity of Sioux Falls, turn on the electrical system, turn on the radios, call approach control and get an approach to the Sioux Falls airport.

So we dead reckoned until we thought we were at Sioux Falls and turned on the electrical system. It was then that we discovered the great flaw in our plan. We got absolutely nothing. By this time the battery had gone completely dead.

Plans B and C
OK, time for Plan B. Theres an uncontrolled airport on the outskirts of Sioux Falls. What we decided to do is use our emergency authority to let down through this overcast – because we did have a pilot-induced emergency. We thought wed find that uncontrolled airport, land there and have the airplane fixed while were teaching the class.

But then we looked at the map and realized there are some real tall antennas in the Sioux Falls area, some of them nearly 2,000 feet above ground level. So we made a 90-degree turn and dead reckoned until we thought we were about 40 miles north of Sioux Falls. Then we let down through the overcast.

Now, the cloud tops were at about 10,000. And the instant we got into those clouds – whap! – we got ice. All over the aircraft.

If youre in icing conditions and you do not have an electrical system, what else do you not have? Pitot heat. So, the airspeed indicator started going 90 … 80 … 70 as if the airplane was slowing down big-time. I was convinced of it until the airspeed went below zero because you know that sucker is not backing up.

So we put the power in, climbed back up into the overcast, and picked up our second load of ice.

Now were on top of the overcast and I am absolutely terrified. I am shaking. I say to Martha, You know, we are really in trouble now.

Night at the Improv
Martha and I have this funny deal. We always take turns flying the airplane. One leg she flies the airplane, the next leg I fly the airplane. If I try to touch the controls when its her turn to fly, she breaks my arm. I would have given anything for it to have been Marthas turn to fly.

So I said to Martha, We have got to do something different here. And twice I reached for the microphone to get weather information, because we had not written down that updated weather. Although we knew generally what the weather was, when you think you are going to die your IQ goes to negative numbers. Neither of us could remember where there was an area that had at least a 5,000-foot ceiling, where we might be able to let down safely.

We talked about going back, and decided we would run out of fuel if we tried that. And so I said to Martha, I got it, I know what well do. Lets find another airplane and follow it to an airport.

So, we started down through the overcast and picked up our third load of ice. By now we were a flying ice cube. And once again we got down to what we thought was 100 feet above the ground, and we still did not see the ground. But we decided we had no choice but to continue on down.

Finally we could see cars on a road. They had their lights on because by now it was getting pretty dark. I said, Were going to land on that road.

And Martha said, Oh no, we cant do that, there are power lines there. And I said, Well, I cant see them. But if we cant agree, we cant do it. And I just simply reached over and pulled the throttle off and said, Were going to land right here, I dont care where it is. And we happened to be over a cornfield.

There was about 18 inches of snow on the ground and there was an ice storm in progress, with freezing rain. So there was about an inch and a half of ice crusted on top of that snow. I had left the landing gear down because without any airspeed indicator I was concerned I might pick up too much speed, and I wanted the airplane under control.

We touched down on that crust of ice with the main wheels and rolled for about 75 feet-and then we fell through the ice. And at this point I began my all-time record short-field landing. The airplane stopped right there when we broke through the ice, went up on its nose, and then came back down.

If youre not familiar with the 210, Ill point out that the landing gear retracts rearward. And because there has to be space for the landing gear, the luggage area is an elevated shelf behind the rear seats.

Of course, we had not been intelligent enough to tie down the luggage, because we knew that this landing would be a safe one. We had with us our personal suitcases, course books for the class, plotters, computers, and a full tool kit. When we came to this abrupt halt everything came forward and jammed us up against the panel of the aircraft.

I looked up and saw this great big hole in the windshield. And I said, The hell youre OK, your head went through the windshield of the aircraft. Martha said, No, Ive got a bloody nose but Im OK. So I reached over and felt her back, and there was blood all the way down her back. And I said, Youve got a lot more serious problem than just your nose hitting the panel of the aircraft.

It took me about 15 minutes to re-arrange all that luggage so I could get the door open. I went to the front of the airplane, and found strung out for about 75 feet in front of the airplane this trail of junk. There were oilcans, wrenches, rags, and so on. And I thought, Ill be darned, someone crashed here before we did.

When I reached the right side of the aircraft and opened the door, I realized for the first time in my life how incredibly stupid allegedly bright people can be. The tool kit had come forward and beat Martha about the head and shoulders and then gone out through the windshield of the airplane.

Scalp wounds, of course, spray blood everywhere. So when I opened that door, Marthas blood was splattered over every inch of the aircraft. The headliner, the ceiling, all the seats, the panel, there was blood sprayed everywhere.

I looked at that and I looked at Martha and I thought, You idiot, you absolute idiot. How dare you take such a risk with the most precious thing in the world, all over the issue of whether or not you want to take the time to get the generator fixed.

And the sad part of this entire story is, when they took the airplane apart, put it on a truck and hauled it to a hangar to get it worked on, the very first thing they looked at was the generator. And all that was wrong with it was that a nut had backed off and one wire had come loose.

All a mechanic would have had to do was reattach that single wire and we would have been on our way with a working generator. It would have taken less than 15 minutes. Because we werent willing to land to get that generator repaired, we were willing to gamble everything that was precious to us.

What did we learn from this accident?

One, dont try to use an aircraft for missions that are beyond its capabilities. We were regularly flying the C-210 in hard IFR, at night, over the mountains, on a tight schedule, for business. This is not a mission at which a single-engine airplane shines. Three weeks after the 210 came out of the repair shop, we sold it and bought a C-310, then later a C-340.

But most important, we realized that like many pilots, we tend to be hard-wired to complete our goals. And although a powerful goal orientation can be a good thing in most of life, it can be a risk factor for pilots. Now when we fly we are intensely aware that risk management is our number one job.

Also With This Article
“Breaking the Chain.”

-John and Martha King operate King Schools and each hold every category and class pilot and instructor certificate.