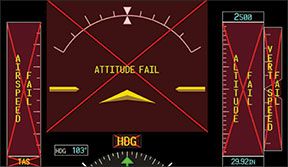 There can no longer be any debate: The advent of the attitude heading air-data reference system (ADHRS) and its incorporation into electronic flight information displays (EFIS has revolutionized the way pilots fly in instrument conditions. The ADHRS/EFIS combination have eliminated the brain-sopping task of repeatedly scanning in rapid succession six key analog instruments, some round power dials and annunciator lights while gleaning critical flight information. The pilot had to first process the information it received from the attitude indicator, altimeter, airspeed indicator, directional gyro/horizontal situation indicator, turn coordinator and vertical speed indicator through her vision, compare it with navigational information and develop, on her own, a three-dimensional picture of where the airplane was in space-time. By the time all that has been accomplished, the situation has changed, since the pilot and the craft are moving at a pretty good clip.

Understand, it is not what you see, the EFIS, that makes the magic. That’s relegated to the ADHRS, hidden away from the glitzy exterior of bright, easily configurable color displays. Today’s ADHRS does all that heavy lifting, letting the pilot’s brain focus on just flying the airplane, navigating and of course, communicating (in that order, please…) during IFR flight. These processors, the core of which are microelectromechanical system (MEMS) gyroscopes, accelerometers and magnetometers in packages half the size of a credit card, constantly recompute an aircraft’s position in the longitudinal, vertical and lateral axes. But what happens if that ADHRS fails?

Failure Is An Option
In a true ADHRS (not just AHRS) system, the generated data are correlated by internal computers with analog data digitized from the airplane’s pitot-static system and with digitized data from GPS, as well as ILS, VOR or other ground-based navigation systems, and, if the aircraft is so-equipped, with ADS-B, TCAS and TIS-B information. The result is a beautiful picture for the pilot of where she is, the weather and terrain hazards that might be around her and where the other participating aircraft are located nearby, plus the health of her powerplant—all on one or possibly two screens.

Thankfully, MEMS technology has become ubiquitous in our everyday lives. Think about it, tiny accelerometers are everywhere: in your laptop (they park your hard drive when they sense you’ve dropped it); in your auto airbags (they know when you need them); and in your cellphone, of which there are more of them than there are us in the world, today. This has reduced the cost of entry for an EFIS system considerably.

As ubiquitous as MEMs accelerometers and such are, it might surprise you to know that light aircraft manufacturers from Cirrus to Cessna, Piper and Beechcraft are only putting one ADHRS unit in each of their typical two-screen systems in light aircraft. Yes, I know that if one screen goes you can, with the push of a red button, throw all that primary flight display (PFD) information onto the multifunction display (MFD) next to it. And yes, you can put MFD info in a neat little box on the PFD. But behind the screens there is only one ADHRS running the whole show, unless you deliberately ordered two.

Fine, you say. You’ve spent maybe $400,000—maybe double that—on your shiny new aircraft, and it is the bee’s knees when it comes to bells and whistles, and you fully intend to use it IFR because it’s so well-equipped. You figure Garmin or Avidyne knows what it’s doing. I mean, you’ve got more GPS pictures than you know what to do with (four if you count your GNS 650/750 systems or, in lower-end installations, dual 430s, plus your tablet). Plenty of backup, right? Wrong.

If you lose that single ADHRS (and they do fail), you are going to suddenly find yourself tossed from that beautiful, colorful 3D wonderland of synthetic vision back into the cold, dull darkness of analog dials, a couple of digital tape gauges and 2D GPS mapping. Will you be ready?

Situational Awareness?
I have to chuckle sometimes when I read manufacturers’ marketing materials. To the uninitiated, their words can be so compelling. Take this excerpt I came across while researching this article:
The “glass panel” overlays airspeed and altitude tapes, navigation and heading information and attitude portion of the scan fades into your periphery, similar to looking out the window–GPS moving map, synthetic vision 3D terrain, traffic alerts, and airborne weather will give you a sense of situational awareness you’ve never experienced in an airplane with round dials–even under VFR.

Really? Because I’ve always felt when flying my Kitfox in VFR, I am quite aware of my “situation,” despite the lack of certain instrumentation, analog or digital. In my mind, it’s a shame so many VFR-only pilots are drawn to electronic flight information systems because the true power of those screens is only unlocked on a dark night, or when you can’t see the ground, the weather, or the traffic. In those situations I will fully admit, I am in love with the EFIS installed in my other airplane. Here’s why.

Presume your EFIS is displaying little more than red Xs, since the ADHRS just failed. Look around your gee-whiz cockpit and tell me how that scan is going to go now. Most manufacturers are tucking the backup attitude, heading and altitude dials discreetly into the panel down low or off to one side where they are not at all easy to see, much less pull into a scan with engine information. Do you remember to set the barometric pressure in your analog Kollsman window or adjust the little airplane in the attitude indicator for level flight? Those instruments won’t be worth much if you aren’t regularly making those adjustments during every flight.
And most dials are electric these days, since vacuum systems are heavy and terminally unreliable. So, if an electrical issue takes out your ADHRS or G1000 system, you could be losing those backups unless they are on a secondary power source. That’s partial panel with essentially no attitude reference. How long has it been since you practiced that?

Seeing Double
That’s my argument for at least carrying a standby, separately powered mini-ADHRS system in any light aircraft that flies IFR. It’s pretty compelling when you think about it. You could hardwire into the panel a Mid-Continent SAM, an L-3 Trilogy or Aspen Basic backup digital EFIS for minimal cash compared to what you paid for your shiny new bird. Better yet, you could choose a location for the instrument close enough to your natural eye level as to make it useful in an emergency.

What if you’ve got an older machine you’re retrofitting for EFIS with an Aspen Avionics, Avidyne Entegra, Bendix-King, Cobham or Garmin system? At the very least, if you have a vacuum system, keep it and put your functional round-dial instruments to work as backups where you can see them, such as vertically aligned between the EFIS and the radio stack, if there’s room. Or, take the time while the instrument panel is torn apart and wire a second ADHRS into your primary system. Then the two computers will happily cross-check each other and tell you if one is misbehaving.

Aspen Avionics and Avidyne will be happy to sell you a dual ADHRS system. Just ask. No, Garmin won’t necessarily recommend it in light piston aircraft, but here’s the thing: Take a peek at the innards of any Garmin EFIS system in a light turboprop or jet and you’ll spy dual ADHRS. Why? Well, why do you think?

Experimentals Have It
Pilots who fly experimental aircraft have the most options and flexibility for backup systems. Many non-TSO’d EFIS manufacturers, from Dynon to GRT Avionics, MGL and beyond offer dual independent ADHRS systems with independent battery backup sources. TruTrak offers an EFIS head that can function as a backup as well as part of its autopilot.

And beyond that? The most recent entrant to the backup market is GRT Avionics with its mini- and X models, one of which is designed to double as an autopilot head, in direct competition with TruTrak. Full disclosure: I fly a triple-redundant experimental airplane. (Yes, I know it only has one engine and no ballistic chute, but stay with me here.) Let’s just say that my builder was a Boeing driver who doesn’t feel safe in IFR unless he’s got more systems than engines. You know the type.

That said, I love watching my dual independent ADHRSs boot up, cross-check each other and let me know that everyone is in agreement. I’ve got a TruTrak analog autopilot head that doubles as a rate-based attitude indicator, digital heading indicator and turn coordinator, as well as a separate analog airspeed indicator and altimeter. The attitude indicator is electric, on an emergency bus with triple-redundant battery power (and yes, I have two alternators). The backup airspeed and altimeter are hooked into the pitot-static system. These instruments sit just to the right of my EFIS and to the left of my radio stack, plenty high on the panel for good viewing.

Don’t Forget Portables
If you rent aircraft and fly behind EFIS or analog instruments in IFR, you still can avail yourself of several different independent portable ADHRS technologies that have recently come to market. None of them are going to offer you the rock-solid stability of a hard-wired panel-mount backup that uses your pitot-static system, but even an iPad-rendered attitude indicator that replicates your missing instruments will be something in the soup. Foreflight’s Stratus box gets you ADS-B, WAAS-GPS and the ADHRS. Other good options for iPhone, iPad or other tablet-based attitude reference are the iLevel or Clarity systems. You can suction-mount or Velcro the Dynon D1 portable EFIS right to the panel. It’s pricing is competitive with the other portable technologies, short the ADS-B functions.

Honestly, I am the kind of person who feels safer when I know I have a backup. It’s simple as that. In my mind flying safely, no matter the weather, is all about thinking your options through meticulously in advance and providing yourself with layers of “outs.” That’s called risk management. Do not believe that flying is about fish tales and “there I was” stories. Finding yourself flying in the dark or in cloud without all of the modern resources that have made personal aviation safer and more reliable is just dumb in today’s world. Real pilots know that there is nothing more satisfying than an emergency situation in IFR conditions completely defused by a redundant system.