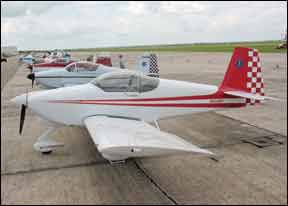 According to the NTSB, “Experimental amateur-built (E-AB) aircraft represent nearly 10 percent of the U.S. general aviation fleet, but these aircraft accounted for approximately 15 percent of the total—and 21 percent of the fatal—U.S. general aviation accidents in 2011.” With those numbers in mind, along with the fact E-ABs represent one of the fastest-growing portions of general aviation in the U.S., the NTSB last year initiated a major study of the segment.
The study’s results were adopted by the NTSB in May 2012, after detailed analysis of accident records going back 10 years, in-depth investigations of all E-AB accidents during 2011, a broad survey of E-AB aircraft builders and wide-ranging discussions with industry. What, if anything, did they find? What were the study’s recommendations? Most important, can the study’s results be applied to those of us not flying so-called “homebuilt” aircraft?

Smoking Gun?
The reasons the NTSB conducted its study is summarized early on in the finding: “E-AB aircraft account for a disproportionate number of total accidents and an even more disproportionate share of fatal accidents when compared with similar non-E-AB aircraft conducting similar flight operations.” That said, the NTSB’s study in many ways is significant for what it didn’t find instead of what it did.

A detailed analysis also was conducted of the 224 accidents, involving 227 E-AB aircraft, occurring during 2011. From that analysis, the NTSB determined “powerplant failure and loss of control in flight were the most common factors associated with E-AB aircraft accidents occurring in 2011.” Notably, this is the same basic pattern observed in the study during the preceding 10 years. The good news there, of course, is there’s no new, previously unknown accident cause. The bad news is builders and pilots are making the same mistakes over time.

Thanks to its granularity—E-AB accidents occurring during 2011 were subject to a supplementary data collection effort—last year’s accidents all centered around a common theme: low/no time in type. The study notes a high proportion of accidents involving used E-AB aircraft occurred shortly after purchase and there “were a greater number of accidents occurring during the first flight by the new owner of a used E-AB aircraft compared with the first flight of a newly built aircraft.” In-flight loss of control “was the most common occurrence for first flights of both newly built and newly purchased aircraft.”

When compared to non-E-AB aircraft, there’s really nothing new here. It’s long been understood that a pilot’s first 100 or so hours in-type are the riskiest. The first flight in a newly built airplane is probably among the riskiest events a pilot can face, short of getting shot at in combat. Interestingly, the NTSB study highlighted that E-AB accident pilots during 2001-2010 generally were older (57 years vs. 53) and had more total flying time than their non-E-AB counterparts, 1000 hours vs. 810.

Bottom line? There’s no real revelation or smoking gun here, either in the detailed look at 2011’s accidents or the decade-long data analysis. So, what how do E-AB and non-E-AB aircraft compare when it comes to phases of flight or accident causes?

E-AB Vs.  NON-E-AB
The three charts above detail the various ways in which E-AB aircraft got into accidents. The two charts on the right, above, look at fatal and non-fatal accident categories for 2001-2010 compared to non-E-AB aircraft accidents during the same period. Meanwhile, the larger chart on the left takes a close look at the 2011 data, comparing it to the CAST/ICAO (Commercial Aviation Safety Team/International Civil Aviation Organisation) taxonomy, which categorizes accident circumstances.

As discussed in the sidebar above, the NTSB data demonstrate E-AB aircraft are less likely to be involved in a weather-related accident, in keeping with their Day-VFR, recreational nature. The NTSB summed it up nicely: “Powerplant failures and loss of aircraft control in flight were the most common accident events for E-AB aircraft, while collisions with objects or terrain and loss of control on ground were the most common accident events for the non-E-AB aircraft.” Simply put, few E-ABs are used in poor weather or for scud-running. Would that we could say the same about certificated, non-E-AB aircraft. They generally don’t have the necessary avionics—although that seems to be changing, at least among the mid-range E-AB fleet, given the ways in which sport-oriented fly-ins are seemingly awash in non-certificated avionics.

Another interesting observation from the NTSB study is this: “The difference in accident event types, and the typical impact forces involved with those events, identifies an important source of the historic difference in the fatal accident rates for E-AB aircraft.” Refer back to this article’s first paragraph: “[t]hese aircraft accounted for approximately 15 percent of the total—and 21 percent of the fatal—U.S. general aviation accidents in 2011.”

E-AB-Only Accidents
So far, when referring to the charts on the opposite page, we’ve been focused on the two comparing E-ABs with non-E-ABs. However, the third chart is interesting, also, since it presents categories for the more-highly detailed 2011 E-AB-only accident data.

Leading accident causes for E-ABs in 2011 were powerplant system failures. The NTSB observed a wide variety of failures for the year, including loose/cross-threaded spark plugs on a freshly overhauled type-certificated engine and on a factory-reconditioned Rotax, an improperly installed coolant hose on a Subaru engine converted from automotive use and an oil supply line failure on a new Jabiru engine.

The next-highest category in terms of occurrences was in-flight loss of control. The NTSB: “Half of the loss of control accidents occurred on takeoff or initial climb. In a number of these accidents, insufficient takeoff speed, early rotation, or too steep a climb on takeoff led to aerodynamic stalls and loss of control.” Two accident pilots admitted their aircraft were over-gross.

Commonalities
If we were asked to pick one theme running through the E-AB-only accident statistics, it would a simple answer: training. Many of the loss-of-control accidents occurred thanks to the pilot’s relatively low time in type. One easily understood reason is the airplane’s relatively low time since completion. But the NTSB “identified several opportunities to reduce loss of control accidents by improving pilots’ access to training prior to flying an E-AB aircraft, and ensuring that pilots have the performance information necessary to safely operate their E-AB aircraft.”

Training and the transition opportunities have long been identified as root causes for many E-AB accidents. Again, obvious reasons include lack of similar aircraft available for rental at the average flight training organization. The NTSB concluded in its study that “the difficulty of finding suitable E-AB aircraft and instructors available for training presents a barrier to pilots seeking transition training.

We’d note that training can take many forms. The availability of for-hire transition training in an E-AB a pilot is likely to fly is something the NTSB addressed in its recommendations and the FAA/industry is working to find solutions. In the non-E-AB world, training is just as important, but perhaps for different reasons. Yes, transitioning is important in our view, but its need isn’t as great as recurrent training, especially among instrument-rated pilots.

What’s Next?
Since the NTSB study was released, a new organization has sprung up in response. The Aircraft Kit Industry Association (AKIA) was formed, with Van’s Aircraft President Dick VanGrunsven leading it. “The record has to be improved, and we believe it can. AKIA expects to be at the table in all future discussions about E-AB safety,” he told EAA during this year’s AirVenture.