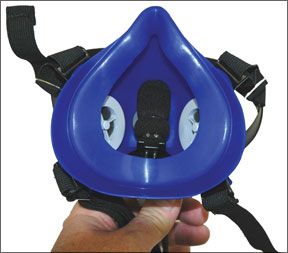 Most of my flying career was spent with an oxygen mask either five seconds away, or with it on and breathing 100-percent oxygen. After many sessions of lectures, altitude chambers and flight missions, oxygen education became a kind of gray thing. While the essentials stayed in the back of my mind, the details faded. That is, until my best friend died at the hands of the

hypoxia monster. I learned and re-learned a lot during those next few weeks.

One of the things I learned (or re-learned) is just how hostile is the high-altitude environment when were not prepared for it. Often, unfortunately, even if we are prepared, it can still rear up and bite us. Of course, the big problem with high-altitude flight operations is it can be a long way down to a safer level, where the air is denser. As well discover, an inability to breathe without some kind of assistance is just one of the problems.

The general aviation pilot flying an unpressurized airplane will not normally operate above 25,000 feet. In fact, its rare to see a personal aircraft not legally restricted to flight at or below 25,000 feet (FL250). One exception is those airplanes type certificated under the old, superseded CAR 3 regulations, for which no regulatory ceiling exists. Nevertheless, equipment regulations requiring reduced vertical separation minimums (RVSM) operations above FL290 in domestic U.S. airspace make these altitudes impractical for the average personal airplane operator. Too, FAR 61.31 requires special high-altitude training before acting as pilot in command of a pressurized aircraft capable of FL250 and higher.

When flying unpressurized aircraft at oxygen altitudes, a cannula is approved for use up to 18,000 feet by FAR 23. At higher altitudes, a mask must be used. These days, most GA operators use a constant-flow oxygen system, which is not the most efficient when it comes to conservation of the supply, but it works well enough at lower altitudes.

Conserving, or “on-demand,” regulators are widely available and work well to maximize the oxygen supply. They work by triggering the oxygen flow only during inhalation.

Still, much of this equipment is only useful up to 25,000 feet. A pressure demand system supplying oxygen to the lungs under pressure is required at higher altitudes. Heres why.

While the average piston driver doesnt see many altitudes on the far side of the teens, some do. Plus, turbine airplanes routinely operate in the 20s and 30s, some at much higher altitudes where the time of useful consciousness after decompression is measured in single-digit seconds. The table below right summarizes FAA data on how long a pilot might have to get on backup O2 when pressurization is lost at altitude, or if the oxygen system fails suddenly.

Operating an unpressurized aircraft above 25,000 feet is rare, and thats a good thing. One high-risk example involves altitude-record attempts by high-performance sailplanes. For

The WWII-vintage military pressure-demand regulators, such as the A-14 pictured below, frequently are found attached to high-altitude oxygen rigs in civilian sailplanes and experimentals. Pressure-demand regulators can progressively mix more pure oxygen into the air/oxygen supply as altitude increases. By around 34,000 feet, the “mixture” is 100-percent oxygen.

Unpressurized 100-percent oxygen at 34,000 feet provides the equivalent of ambient air (which only contains about 20-percent oxygen) at sea level. At 40,000 feet, 100-percent unpressurized oxygen provides the equivalent of ambient air at 10,000 feet. That, of course, presumes there is an absolutely tight mask seal with no leaks and a well-functioning system. Facial hair-a full beard, for example-makes a complete seal unlikely. To raise this physiological ceiling higher, it is absolutely necessary to breathe 100-percent oxygen under positive pressure above 40,000 feet.

Pressure-demand regulators like the A-14 should include selectable pressure settings, starting with “Safety.” Air Force physiology manuals state clearly pressure breathing is not absolutely required until 40,000 feet if 100-percent oxygen is used. However, they do strongly recommend using at least the minimum pressure setting (“Safety”) as low as 31,000 feet, and for good reason. Thats to guard against a leaking seal, or ill-fitting mask.

At sea level, the atmospheric pressure is 14.7 PSI. At 40,000 feet its only 2.72 PSI. If outside air gets into the mask and is breathed, it contains one-fifth (20 percent) of the oxygen necessary for survival at 40,000 feet. The time of useful consciousness on ambient air only at 40,000 feet is 15 to 20 seconds. That time may be cut in half in the event the cabin is pressurized and there is a rapid decompression, as the table on the preceding page reflects. This hazard of mixing ambient air and 100-percent oxygen helps explain why there is an altitude limit of 18,000 feet approved by the FAA on cannula use. Plus, you can get into real trouble with a cannula if you are a mouth breather or have a cold.

The very critical lesson here is to use a pressure setting for any attempt at altitudes above 31,000 feet so that any “leak” will be from the inside of the mask to the outside. Its okay to lose a little 100-percent oxygen to the outside, but outside air containing only 20-percent oxygen leaking into the mask can be fatal. The time of useful consciousness (TUC) can be so short there is no problem-solving opportunity remaining at all.

An additional safety measure for high-altitude unpressurized flights in small planes is the use a finger-type pulse oximeter to monitor your blood oxygen content. It can give an early warning of oxygen supply deficiency.

Also, Its Cold Up there

The hazards of oxygen management at extreme altitude also can be insidious. The unheated environment promotes ice formation not only in the mask but in the regulator itself. Oxygen expanding from the bottle through the regulator further reduces its temperature in what may already be a -55-degree C. environment. Some aircraft may avoid these issues by having a portable system located inside the heated cabin. Others may risk icing problems when a built-in systems oxygen supply is located in an unheated area.

The unpressurized B-17 of WWII flew at altitudes around 25,000 feet, and crew stations were unheated. One problem was the freezing of oxygen-mask exhaust valves. The high moisture content of breath exhaled into the mask sometimes turned into ice, blocking the valve open and allowing ambient air to reverse-flow into the mask. The altitudes being flown then were not as critical as the higher ones, so this kind of malfunction did not necessarily carry a death sentence.

Much of the foregoing probably doesnt apply to you or your operations, since few personal aircraft can get high enough to do us real physiological harm. Thats a good thing, since the time it takes to become aware and then react to an oxygen-loss situation is not often is woefully insufficient, as the awareness itself is often brought on by hypoxia already setting in. But, a growing number of us are flying pressurized aircraft to new heights, where even the training required by FAR 61.31 may not be enough to fully understand the hazards and equipment requirements.

On the remote chance you consider climbing an unpressurized aircraft above FL250, pay close attention to your oxygen equipment. Consider not only a back-up system, but also investing in a pressure regulator and associated equipment. Then learn how to use it.