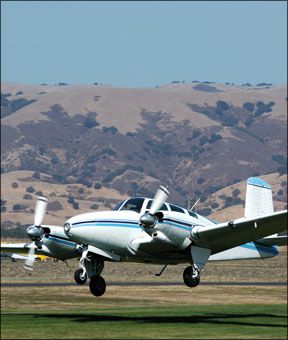 Everybody talks about crosswind practice, but few pilots do anything about it. Crosswinds are the number one factor in weather-related accidents, and even far more in-motion aviation insurance claims. The answer to handling crosswinds is usually to…practice crosswinds. Theres no question that practice makes one (at least closer to) perfect. And, as is the case with most other maneuvers we attempt when flying

aircraft, landing in crosswinds requires the artful combination of a number of individual skills.

As with so many elements of learning to fly and maintaining proficiency, there are several of ways to develop and improve your crosswind skills. You dont necessarily have to practice them in an actual crosswind, but you do need to be ready to combine them on the day when things are strong and gusty, and not aligned with the runway. Here are five exercises you and your CFI can use to develop better crosswind landing skills.

Sometimes called “slow flight,” flying at minimum controllable airspeed is defined as flight at a speed from which any increase in angle of attack results in an immediate stall. This is generally presented in training as a “checkride trick,” a maneuver to be mastered for its own sake in order to pass a Task item on a practical test for a pilot certificate or rating. Part of what is learned when flying at minimum controllable airspeed, however, is the need for excellent rudder/aileron coordination, essential for mastering the final seconds before touchdown in a crosswind landing.

Strictly speaking, “Dutch roll” describes a tail-wagging characteristic of many airplanes, especially swept-wing designs. Disturbed from straight-ahead flight by turbulence or uncoordinated control movement, the tail describes an ellipse with its foci near the horizon. The back seat of an airplane in a Dutch roll is not a comfortable place to be.

Dutch roll also is sometimes applied to a flight-control coordination maneuver designed to improve instructive control movements while tracking toward a reference point. Heres how I was taught the Dutch roll in U.S. Air Force flight training: At altitude, after clearing for traffic, aim the airplane at a reference point on the horizon. Once established, begin a continuous series of left and right banks, using opposite rudder so the nose remains pointed at the reference point. Roll through the banks slowly (a hard concept for aspiring fighter pilots), pausing a few seconds at the maximum bank angle left and right.

Banking left requires right rudder, banking right requires left rudder. In the USAFs T-41A (a 1965 Cessna 172), we made 45-degree banks and had to do some serious finessing with the rudder to keep tracking toward the target. Depending on the airplane you fly, you may need to lead with the rudder first, then add aileron, as you bank back and forth without a pause through wings-level and with the nose pointed straight ahead.

If you dont use the proper amount of rudder applied at the correct time, the nose will wallow back and forth across the horizon while pitching a little up and down and describing an oval or ellipse; the tail waggles around just as described in the “official” definition of Dutch roll.

I guess the true name of the maneuver we learned in USAF flight screening should be “avoiding a Dutch roll,” because thats what we were trying to do. Whatever you call it, precisely applying just the right amount of rudder to track straight ahead while the bank angle changes is the goal of flying this maneuver. Sounds a lot like maintaining runway alignment in a variable, gusty crosswind, doesnt it? Not for the weak of stomach, even in the pilots seats, practicing “avoiding a Dutch roll” is another excellent exercise for honing your crosswind landing skills.

Are you a “wing-low,” side-slip-to-landing pilot, or do you use the “crab method” to counter crosswinds? Heres a radical thought-neither is the “right” way, and neither is “wrong.” They are two different ways to achieve the same result: touching down with no sideslip, compensating for the drift resulting from a crosswind.

Most pilots are taught one method or the other early in primary flight training, and decide their instructors technique is the “best” way to land in a crosswind. The reality is unless there is some airplane limitation dictating one or another, either technique works just fine. For example, transport-category airplanes with four pod-mounted jets under the wings often must be landed in a crab because a wing-low slip will cause the outboard engine on the low side to drag the ground. Thats why so many airline pilots tell us you “have” to land in a crab in crosswinds, “kicking” the airplane into runway alignment with rudder and wings level just before touchdown.

To improve your crosswind landing capability, why not find a CFI conversant with the “other” crosswind landing technique, and get some dual seeing how the other half lands? It may be youve struggled with crosswinds when landing wing-low but do just fine in a crab. Or vice versa.

Wait for a completely calm-wind day. Find a wide runway with little traffic-a decommissioned bomber base is perfect for this exercise. Line up on the runway and add just enough power to roll forward at a running pace. With your feet off the brakes and very little pressure on the rudder pedals (but keeping your feet ready in case you need aggressive steering), move the control yoke or stick full over to the left.

In your exercise on a wide runway with no wind, then, you can determine whether and how much your airplane is affected by adverse yaw on the ground. Some planes Ive flown (Beech Bonanza, Baron) have nearly no adverse yaw effect, while others (Cessna 120, 172 and 185) exhibit quite a bit. You may be able to effectively steer-and combat crosswinds-with aileron alone. When you think about it, this is part of what were taught for aileron control during a crosswind-if the winds from the right you land with right aileron and, as the plane slows and controls become less effective, you increase aileron deflection. Is this technique really designed to “keep the upwind wing down” against the wind? Or is it a holdover from the earlier days of aviation, in airplanes with significant adverse yaw on the ground, as a technique for using adverse yaw to resist the airplanes tendency to weathervane into the wind?

Once you know how your airplane behaves, you can include adverse yaw steering in your repertoire of crosswind technique, and practice the wide-runway exercise now and then to keep your adverse-yaw steering skills sharp.

This is the graduate maneuver of crosswind exercises. Once you have very solid crosswind skills, you can maximize the experience by making one-wheel touch-and-goes. While landing in a crosswind, let the upwind main wheel touch, but then go around without letting any other tires contact the surface. This exercise fine-tunes all your crosswind senses and lets you practice a lot of crosswind landings in a short period of time.

All my previously published warnings about touch-and-goes apply. I recommend against the practice in retractable-gear airplanes, because there is a strong correlation between touch-and-goes and landing gear mishaps, when the pilot moves the gear switch instead of the flaps while “cleaning up” during the on-ground phase of the maneuver.

Retractable gear or fixed, I suggest you perform one-wheel touch-and-goes only with an instructor pilot in the right seat, and with a strict division of duties-you add power and control the airplane, the instructor adjusts trim and flaps as necessary. You can minimize the risk even more by using no more than manufacturer-recommended takeoff flaps for one-wheel touch-and-goes. That way you dont need to move the flaps at all while on the ground. You power up and fly the exercise; your instructor re-trims and provides quality control for your efforts.

Unless you fly only from a turf runway large enough to allow always taking off or landing into the wind, crosswinds are a fact of life. How we deal with them is one mark of a competent pilot. Ultimately, of course, there also are crosswind situations exceeding our skill levels and thats when diverting to a nearby runway more closely aligned with the wind is our best choice.

In the meantime, practicing crosswinds can make you a better crosswind pilot. Often, crosswind training is conducted by actually flying in them, but thats not the best way to practice. Instead, think about the various skills and techniques you need to safely, predictably land in a crosswind, then go out and practice them Youll actually learn more by flying these and other exercises to fine-tune your stick and rudder skills, then combining them into a much more effective crosswind technique.