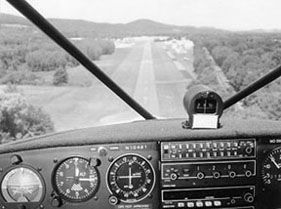 If youre ever lucky enough to fly a transport-category simulator, youll probably be overwhelmed by the first few minutes of the experience. The big airplanes systems are complex and compared to a light aircraft, the handling can best be described as whale-like. Anticipation and patience are critical skills.

But what about the other side of this coin, the heavy jet pilot slumming down into a light GA airplane? Does it present similar pitfalls? Indeed it does, especially for pilots who havent stepped into anything small for many years. There are lots of examples in the accident record that show that transitioning down has smeared an otherwise clean safety record for some big metal drivers. Ironically, as I was preparing this article, a nearby NTSB field office was investigating fatal accidents in general aviation aircraft suffered by four pilots from the same major airline.

Why? Theres no pat answer other than to say that compared to heavy-aircraft airline flying, GAs little airplanes have simpler systems with fewer automatic back-ups, rarely have icing protection, use single-person crews, have vastly different handling characteristics and, in general, the training may be less thorough. Yet all of these risk factors can be addressed in one way or another so that transitioning down neednt be unusually risky.

War Story
A classic example of pilots caught in the trap of transitioning down happened to the U.S. Air Force. Cadets at the Air Force Academy destined to be trained as pilots undergo a flight screening program during their senior year. In my time, the program used the Cessna 172, which flew for 30 years without a single fatality.

The chief of staff then decided that an enhanced flight screening program was needed and the Academy acquired the British-built T-3 Firefly, which was capable of 200 mph speeds and full aerobatics. Instructors were chosen from the rated military pilots on the Academys staff, pilots with heavy jet experience of all kinds. In parallel to the Academys program, the Air Force operated a flight screening program staffed by civilian instructors in Hondo, Texas. That program also used the T-3.

With the acquisition of the T-3 and the modification of its large fuel-injected engine into such a small engine nacelle, the program was troubled from the start, with 53 unexplained engine failures, thought to be fuel-system related. How these failures were handled by the pilots is telling. When I went through the screening program in Cessna 172s, simulated forced landings were part of the curriculum and its a maneuver practiced many times during a civilian pilots training.

But on September 30, 1996, an Academy instructor pilot and cadet were practicing a simulated forced landing. The engine actually failed during the maneuver and they were unable to safely execute the forced landing, a maneuver that should have been benign. Both aircraft occupants were killed. The accident was the second of three fatal mishaps the screening program suffered. One involved an unrecoverable spin, the other a stall/spin in the pattern.

All three of the instructor pilots had flown large transport aircraft in their previous Air Force assignments, while instructors at the sister-base in Hondo, Texas were civilians under contract with the Air Force, whose backgrounds included years flying small, piston-powered aircraft. One of the instructors at Hondo was quoted as saying, If the engine quits, we know how to land the airplane and walk away from it. The Air Force guys just know how to bail out when that happens. Adding insult to injury, the former chief of staff suggested that having three transport pilots in the right seat contributed to the accidents.

Not The Same
For starters, the difference in flight momentum is substantial. A larger aircraft has more momentum due to its mass. It will tend to retain its speed and direction more solidly than will a lighter aircraft. However, once disturbed, a heavy airplane takes longer to get back to the desired altitude and heading.

I once took a small experimental for a test flight. The aircraft was so light that a child could have picked up the tail to reposition it. On final approach, I couldnt believe how quickly the airplane lost its momentum. Conversely, it also regained momentum faster with power application. It took far different control reaction to keep the aircraft on speed in wind shear or turbulent air that Id expect in a heavy airplane.

Speed and speed control are widely different between light and heavy aircraft. Consider that a Cessna 172 can comfortably fly an approach at 60 knots, less than half the speed that a heavy aircraft might fly on final. In a jet-powered heavy-even a turboprop-slowing down for approach has to be anticipated well ahead of the point where on speed must be achieved.

Similarly, the decision for a go-around has to be made many seconds sooner in a heavy than it would be in a light aircraft. Power response in a piston aircraft is almost immediate; in a jet, theres likely to be some lag.

The sight picture from the cockpit is utterly different, too. A light aircraft pilot trying to land a larger aircraft for the first time will be alarmed at how high the flare begins. On the other hand, the heavy driver may tend to flare a little airplane 50 feet too high.

If handling and speed are different between light and heavy aircraft, systems can be like night and day. In general, the larger aircraft have more redundant systems that are more reliable.

For all practical purposes, theres no such thing as partial panel in the heavy metal. That said, take your heavy metal buddy out of his jet and put him into a Bonanza and have him fly simulated partial panel. Hell probably make a hash of it. That doesnt make him a bad pilot, just one who hasnt been trained in the peculiarities of little airplanes.

De-icing and anti-icing is another area where jet pilots are often caught short when they get into a GA aircraft. On one common turboprop, the engine is protected from icing by a heated inlet plus pilot-activated inertial separators which direct the heavier ice particles overboard before they reach the compressor section. When the separators are deployed, the powerplant gets less air which means that it also produces less power.

Now compare that to something larger, like the Boeing 727. The engine anti-ice diverts bleed air from the engine and re-introducing it into the inlet also decreases power output, as with the turboprop. But the power loss isnt as noticeable as it would be on a PT-6-powered King Air.

Jets tend to slip through ice without much concern, while propeller aircraft slug it out in ice and can quickly pick up dangerous loads. I mention this because I was reading one accident narrative in which a retired airline captain who had flown jets for most of his career was flying a turboprop in icing conditions and apparently failed to understand how engine anti-ice would seriously sap the airplanes performance.

I once tried to explain the limitations of icing equipment on lighter aircraft to a friend who flies large transport aircraft in the military. He couldnt see a problem. To him, climbing is always the quickest way to get out of icing. That works well in aircraft which have the power to climb but piston aircraft dont always have that luxury, especially if theyve picked up some wing icing or are already near service ceiling.

Somehow, merely reviewing the manual doesnt always drive this home. Book knowledge is critical but understanding how to use the systems in flight is more important, information that isnt always contained in the book. Sometimes it comes only from trial and error, sometimes from luck and occasionally from good instruction. Sadly I think we rely too much on trial and error rather than sound, well-developed curriculums to help with transitions.

We found that during a nose-high unusual attitude, adding power created such a large pitch-up moment that it increased the high angle of attack, making things worse. Clearly, the airline needed another recovery method. And aircraft manuals for smaller aircraft are often lacking in this fine-point detail so that pilots trained in one maneuver may mistakenly apply the same strategy to another aircraft, assuming it will work.

In developing a training curriculum, remember this: similarities between aircraft may be small but differences can be quite large. If youre an instructor transitioning a pilot downward, common sense will dictate where the risk areas are. Heres a short list:

Systems: Review the aircraft systems carefully, with emphasis on the fact that light aircraft have little redundancy compared to transports. Fuel, electrical and vacuum are the important ones to review.

Speeds: Light aircraft fly comfortably at speeds far slower than larger aircraft do and, in general, the speeds dont vary as widely with weight as in transport aircraft. Critical speeds? Vs, Vso, Vlo, Vne and Vref, what airline pilots know as weight-dependent final approach speed.

Engine/fuel management: For a jet or turboprop pilot, managing a piston engine may be a throwback to the dark ages. Emphasis should be on power management and leaning, which will markedly impact range planning.

Emergency procedures: The important items are engine failure drills and system emergencies, such as vacuum, electrical and instrument failures. These may be trivial in a large airplane, life-threatening in a small one.

Avionics and autopilots: Its a fact of life that a pilot used to a 727 with steam gauges may encounter glass-cockpit-state-of-the-art in a Bonanza or Saratoga, especially with regard to the latest generation GPS. Briefing up this equipment-including all aspects of autopilot operation-should be on the must-do list.

A well-developed training curriculum, complete with reference material and an experienced, motivated and insightful instructor is the best way to transition into another aircraft, whether it be smaller or larger. If the transition down is done with care and guidance, it will be a pleasure for both the pilot and the CFI.

Pat Veillette is a safety researcher who works in the training department of a large carrier.

As The Pro Flies?