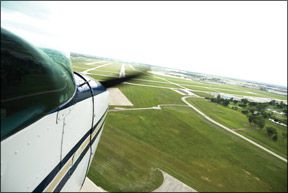 There you are, droning along in cruise. Suddenly, theres a vibration, then a power surge, then combustion ends…and youre flying a glider. For a moment you hesitate-no one is immune from at least a split-second of indecision, most of us much longer-and then you realize you have an engine failure. You maintain control, point the aircraft in the direction of a place to land, then confirm the failure. If you have time and altitude you can try to restart the engine, but if the

failure is catastrophic youll quickly find theres nothing you can do to fix the engine from the pilots seat. You are committed to a glide and a power-off landing.

What speed should you fly?

As the airplane decelerates from cruise you aim for your airplanes “best glide” speed. But is this the best choice? Best glide airspeed is an indirect measure of the optimal angle of attack that results in minimum drag. Fly a minimum drag speed and youll get the maximum available performance for a given amount of power, even if that power is “zero.” But like other performance-related V-speeds (VX, VY, VA, etc.), the best glide speed published in your Pilots Operating Handbook (POH) was determined at the airplanes maximum gross weight. At lesser weights-by definition, its impossible to be at altitude in a cruise configuration and gross weight at the same time-the airplane will achieve the same angle of attack at a lower indicated airspeed. Consequently, the least drag angle of attack happens at a slower speed too, so your best glide speed goes down with a reduction in airplane weight.

How much? The speed for any given angle-of-attack-related performance speed is determined by the formula on the opposite page. As a practical matter, in most high-performance light airplanes, you can reduce best-glide speed by about two percent for every 100 pounds below maximum gross weight.

To get an accurate idea, do the math for your individual airplane, then make a table of best glide speeds for specific airplane weights.

The reality is, however, that youll go from denial to highly distracted action. You may not be able to calculate a revised speed, or look up one on a previously prepared table. Its far easier to do what weve all been taught to do-aim for the “book” best glide speed, knowing that if youre a few knots below target speed you actually may be doing slightly better than you would if you flew the published speed precisely. For maximum performance, its far more important that you be somewhere very near best glide speed, and that you have the airplane in the proper configuration.

Getting best glide performance is a matter of having the least total drag. In addition to angle of attack, this means retracting wing flaps and (as appropriate) landing gear. These items are pretty obvious, and in most engine failure scenarios theyre already up at the onset anyway. Less apparent but still critical to maximum performance are things like good rudder coordination, retracting cowl flaps (“cooling drag” from excess air flowing across cylinders and engine components greatly increase drag) and-very important-propeller speed with controllable-pitch propellers.

At a safe altitude and after cooling the engine and clearing the airspace, I gently retard the throttle to idle. Ive already briefed the pilot on the demonstration, so he/she holds altitude, confirms flaps and gear are up, verifies the engine failure (by simulation in this case) and aims toward a possible landing area until the airspeed slows to the best glide speed. Upon reaching that speed, he/she lowers the pitch attitude to maintain best glide-in a late-model Bonanza it takes a five-degree nose-down attitude to hold best glide speed in this configuration. The resulting vertical speed at typical training weights (two aboard and about half-full fuel tanks) is roughly 1700 feet per minute.

I have my student talk through the engine restart steps and, when briefed the engine does not restart, commit to the glide by pulling the propeller control to the lowest rpm position. The reduction in drag, the student finds, is dramatic, with acceleration pushing us into the seat backs. This increase in speed increases total drag, however, so the student needs to pull the nose up to stay at best glide speed. In an A36 Bonanza we end up with the nose level on the horizon, zero degrees pitch, descending “flat” at best glide with a vertical speed of 700-900 fpm.

If the engine temperatures are still behaving and altitude remains, I then have my student extend the landing gear. The added drag requires pushing the nose down, as it turns out, back to that five-degree nose-down attitude, resulting in about 1700 fpm descent. At least in the A36 Bonanza, the effect of forgetting to “pull the prop” is the same as leaving the landing gear out.

Changing the propeller pitch from cruise position to low-rpm windmilling can reduce descent rate by almost half. The drag of a cruise-position propeller is equivalent to that of extended landing gear. Carefully check it out in your airplane, even if its got fixed landing gear. The demonstration is dramatic enough that you should remember to “pull the prop” when your engine restart attempts fail and youre committed to a glide.

One of the great features of most GPS navigators is the “nearest airport” function. Most devices allow you to specify the types of airports thatll appear on the list; its in your best interest to include “all airports” so youll know any option in an engine-out emergency, even if the runways are short. Hit “nearest airport,” then go direct.

If you dont have a GPS, and havent been tracking your position so where you know where the nearest airport might be, or if that airport is beyond your available gliding range, youll need to locate a field, parking lot, golf course or other open area to use as an emergency landing spot.

Sailplane pilot Kai Gertsen has published a superb online book on selecting off-airport landing zones, posted online for free in Adobes Portable Document Format (PDF) at tinyurl.com/offairport. A veteran of no less than 169 off-airport landings (and having “probably picked ten times that number”), Gertsen covers the hazards in detail, with copious suggestions for dealing with each.

“Luck plays a surprisingly small role in successful [off-] field landings,” he writes. “Ninety-nine percent is know-how, preparation and skill.” The biggest threats to a safe landing, Gertsen says, are wires, slopes and fences. The book is definitively worth a complete read. But in summary, he provides the considerations listed at left for selecting an emergency landing site (paraphrased to apply to powered aircraft making an engine-out landing). If there are no poles or trees that suggest power lines, your best bet may be to land on an unoccupied road or highway.

Once you have the field made, you need to figure out how to transition from glide to approach to landing. Here, too, you have options. Your best bet is to try to make a pattern as close to normal as possible, realizing that with no power your rate of descent will be greater than usual. Many pilots routinely make idle-power approaches from the downwind leg just so they are practices for the unlikely case of an engine failure.

Where to this point you have been flying the Best Glide speed, now you should transition to the speed for the least rate of descent. Least Rate will extend the time youll remain airborne, but you wont be able to get as much distance across the ground. Its analogous to the difference between Vy speed (Best Glide) and Vx (Least Rate).

“Least rate” is your target once youve turned onto your final approach-elsewhere in the pattern, even over the field, requires you fly the distance it takes to get around to final approach. Least Rate is usually a little higher than the normal “book” final approach speed. This is because without power youll have less prop blast over the elevators, so it takes a little higher indicated airspeed to have the same control authority.

Nearing your landing zone, confirm everyone is belted in tight, with shoulder harnesses cinched. If the plane doesnt have shoulder harnesses, (1) use something padded to protect faces, especially for front-seaters, and (2) if you own the airplane, get shoulder harnesses installed now, before you need them. Most POHs suggest unlatching cabin doors or windows to make an easier escape, and to prevent them from jamming from impact forces. Switch off the fuel now so you dont have to reach down to do so closer to the ground.

Gersten tells us to aim for a defined spot well into the field. Not only will this help you avoid hard-to-see power lines and fences that border many fields, it also gives you a buffer for undershoots and accounts for the fact the rate of descent will increase when you extend retractable landing gear.

You have a singular objective for final approach: Touch down with wings level, under control, at the lowest safe forward and vertical speed. After youve made the last configuration change (extending flaps and landing gear) turn off the battery and alternator to reduce the chance of fire. Aim for your touchdown zone, even if the field is short-its better to impact slow on the far end of the field than to hit something fast on the approach end. Evacuate the airplane as soon as it comes to a stop.

Engine failure scenarios in multiengine airplanes is really for a separate article. But some of the same principles apply. Control the airplane through the denial phase, then maximum available power and minimize drag, including feathering the propeller. “Blue line” speed (VYSE, best single-engine speed) is the least-drag speed, so this is where you get the best climb performance, or at least the minimum descent if youre above the single-engine service ceiling.

Most multi pilots dont think much about best glide. There are very few scenarios resulting in simultaneous failure of both engines (mainly, fuel starvation or exhaustion). But if both mills do stop spinning, youll need to get maximum glide performance in a typically heavy airplane, with two draggy propellers. The key? Feather the props, then fly at or near blue line speed or the POH-defined best glide. Be ready for the rare double engine failure by considering the glide configuration, even in a twin. One note: the feathered props reduce drag so much that your airplane will use a lot more distance in the flare than normal. Given any options, pick the longest field pointed into the wind to help minimize your landing distance.

From denial to final