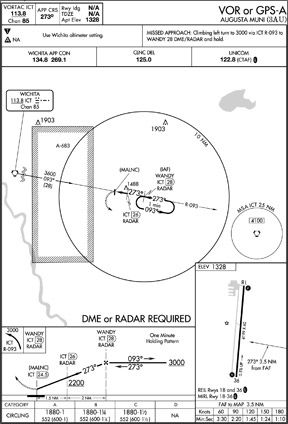 Over the past few years the FAA has added new non-precision instrument approaches at a remarkable rate-thousands of procedures with names like LNAV and VNAV, and ILS-comparable LPV approaches-2208 LPV approaches alone. The common denominator among these relative newcomers to an instrument pilots nomenclature is their dependence on the wonders of GPS, in particular, Wide Area Augmentation System-based (WAAS) GPS. The primary benefit of a WAAS-enhanced

approach is availability of a pseudo glideslope generated by the in-cockpit GPS navigator, bringing ILS-like vertical guidance where theres no ILS.

This constant-angle descent replaces the traditional “dive-and-drive” method of getting down to the approachs minimum descent altitude (MDA), providing a more-stable way to find a runway. Which method is better? We asked an experienced flight instructor and the head of AOPAs Air Safety Foundation to comment, based on their frequent use of both methods.

Of course, WAAS brings a previously unattainable level of accuracy to signals from our old familiar GPS satellites. Youve got to have a WAAS-enabled and IFR-approved GPS navigator for the LPVs. And WAAS receiver options remain a less-than-plentiful commodity in TSOd equipment in todays market. But more options reportedly are coming, from different manufacturers.

As noted, LPV approaches can be as good as an ILS in some instances, or really close in others (For more about the various kinds of GPS approaches and their capabilities, see the sidebar on the opposite page). Many elements of this evolution-particularly the potential for increased access to hundreds of airports-are unquestionably positive.

The thinking behind the approachs design is a constant descent angle is safer. That may be, but the vagaries of weather also can mean not seeing the runway environment in time to land and being forced to execute the missed approach. While theres a lot to be said for stabilizing what can be a destabilizing maneuver, theres also the issue of flying the missed approach.

Still, many of the old NPAs have nuances continuing to recommend them. In fact, many pilots experienced in those nuances note that some days, in some conditions, the better option may be choosing an old-fashioned VOR approach with its dive-and-drive characteristics. Too, not all constant-descent arrivals offer better ceiling or horizontal visibility numbers. Second, any NPA with a dive-and-drive or step-down descent introduces greater workload thats absent when flying constant-angle approaches.

One of the more-familiar, more-frequent approaches in my logbook is a long-time NPA into Augusta (Kan.) Municipal (3AU), about midway between Wichita and Augusta, Kan. The airport enjoys two different types of approaches: a classic VOR requiring either DME or radar coverage to fly, and a GPS arrival.

Flying either, ATC routes you westbound to the WANDY Intersection at 28 DME off the 273-degree radial off the ICT VOR-3.5 nautical east of 3AUs Runway 18/36. Decision height is 1780 feet msl and one mile is the visibility requirement for the mandatory circle-to-land maneuver.

Flying westbound from WANDY, the approach requires descending 800 feet over the next two miles, then another 420 feet to MDA-1780 msl, or 452 agl-in the next 1.5 miles. If you did it right and the weather is cooperating, youll arrive at a slight angle to the runway just south of its midpoint. The 1780-foot MDA is not portrayed as a step-down fix, however, and many pilots dive to 1220 feet shortly after leaving WANDY and drive onn looking for the airport at 24.5 DME.

Some days youd see one end of the runway, some days the other. The challenges include getting level at MDA after that steep descent and maintaining control while flying steep maneuvers to keep the runway in view and staying within a mile of the arrival end, all while flying at about 450 agl.

Using a GPS to fly the same approach allows use of a generated glideslope for the trip from WANDY, making a constant-angle descent more feasible. The need remains to level off at MDA when looking for the runway. Youll still need to maneuver at a relatively low altitude, but thats true with any circling approach.

A pilot who lives and flies near Augusta offered a couple of noteworthy observations about the differences. According to this FAA CFI of the Year, part of the difference boils down to the approach course relative to the runway orientation.

“When you fly the VOR approach, youve got an opportunity to see the runway at several points-and you need only see enough of it through a hole to take advantage of that and start the circle to land,” he explained of the VOR-A/GPS-A approach.

“On an approach with a GPS-generated glideslope youre looking at the runway from the end, and if you dont clear the clouds and see runway before you get to MDA, youre through.” Then its time to go missed, he noted, adding, “Continuing down is a big mistake.”

Additionally, on the VOR-A/GPS-A approach, you can slam-dunk that final 420 feet as fast as you want, potentially getting below the clouds and getting a look from an angle that wouldnt work by holding a constant descent. “The dive-and-drive approach has some other advantages,” he observed. “You can get stable at the MDA before you need to go missed, and that can reduce maneuvering errors when you have to choose which way to circle.”

Using the constant-angle descent, he added, may increase the chance of busting below MDA or arriving with excessive speed-or worse, too little to maneuver. “When people fly the constant-descent approach, they tend to use pitch to arrest the descent and go through the bottom in the process-or they pitch up and carry too little speed into turns as they maneuver to land.” Neither option is exactly the path to fine-tuned instrument flying.

Bruce Landsberg has for years headed up the AOPA Air Safety Foundation. He explained the FAA uses threshold crossing height to compute descent angles and starting points for NPAs and notes doing so sometimes creates a steeper glideslope than the standard three degrees nominally used for an ILS. As examples, he used the approaches to Runway 23 at his home field, Frederick (Md.) Municipal (FDK).

The ILS or LOC RWY 23 approach takes you to a 684-foot msl DA and requires 1.5 miles visibility; the descent angle is the standard three degrees. And the approach has a wrinkle: VGSI and the ILS glideslope are not coincident.

What makes the lower MDA and visibility numbers work for this one? We were told the 3.41-degree glidepath angle generated-and, again, the VGSI and descent angles are not coincident. The 50-foot threshold crossing height doesnt hurt, either.

Whats this all mean? Difference in approach construction and technology translate to differences among approaches-even similarly structured arrivals to the same runway.

Both Landsberg and our CFI of the Year advise eschewing dive-and-drive, chop-and-drop or other dramatic, steep-angle descents when you need to arrest the drop at a hard floor.

“Most of the time its probably going to work to your advantage to follow the generated glideslope while remembering its still an NPA,” Landsberg explained. “If you remember that and tailor your expectations accordingly, you should be fine.” Expectations? Well, the charts for the GPS-guided arrivals to FDKs Runway 23, reproduced on the opposite page along with the ILS plate, include notations about the virtual-or generated-glideslope and the descent angles not matching up, as noted.

As for approach choices, both advised against using numbers alone to make a choice-particularly if youre looking at approaches you regularly need. “Here at Frederick, Id choose the RNAV Zulu over the ILS every time,” Landsberg explained. “The GPS signal is dead-rock stable but the ILS gets a little wobbly as you go down.”

Pilots flying into Augusta back in Kansas feel similarly about the GPS-A over the VOR-A. At 28 miles to the ICT VOR, planes descending from 3000 at WANDY often experience VOR-needle wandering-sometimes far enough off that when centered you cant see the airport below. The GPS-A suffers no such anomalies. And with a GPS-generated glidepath, the pilot can, if so desired, eliminate the dive-and-drive or chop-and-drop.

Said our CFI of the Year, “The airlines and the FAA have really moved away from D&D [dive and drive] and more toward LPV and VNAV, with GPS-generated glideslope.” The move away from the dive-and-drive, according to FAA and airline training pilots, was initiated by air carriers-specifically regionals whove had a bad record with non-precision and circling approaches.

A 2007 article in the Flight Safety Foundation publication AeroSafety World noted dive-and-drive increases accident risks in air-carrier operations by five times. The non-stabilized approach doesnt fare much better for general-aviation aircraft, as both of our correspondents noted.

“The advantage of the D&D: It satisfies the philosophy of doing a NPA as required by the PTS,” the CFI of the Year said.

Generated glideslopes tend to bring the aircraft down to a DA at a speed and angle permitting you to continue that rate of descent to the runway-assuming you see it. “Because of that and potential obstacle clearance needs, the generated-glideslope approach often has a higher DA than other NPAs,” he explained.

Still, the old ways have their benefits. “Some D&D arrivals will very often result in lower minimums than the generated glideslope and put you in a position to see the runway when the other wont,” he observed. “So, the dive-and-drive is still required by the PTS and if done properly, it can be done safely.”

Dave Higdon is a professional aviation writer/photographer with several thousand hours of flight time in hang gliders, ultralights and airplanes. His stability is unknown.