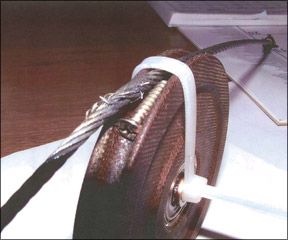 The control yoke was binding when turned left approximately 45 degrees. Upon inspecting the aileron control system, a screw was found lodged in a pulley groove and the cable (p/n 106-524044-19) was damaged. The aircraft had flown 2.0

hours since its last annual inspection. The screw appeared to be a floor panel screw.

Flat spots and fraying were noticed on three aileron control cables (p/ns 0510105-365, -364, -360). A substantial groove could be seen in the carry-through cable. Cable tensions were within specification. The plastic pulleys were clean and free to roll.

The submitter speculates the wear results from the cables rubbing against the pulleys instead of rolling, and suggests replacing them with the phenolic pulley used in all other areas of the aircraft.

The ridged steel tube feeding the oil/fuel heater developed pin holes underneath the attached fire loop bracket. When this line (p/n: 3013446) is removed, the pin holes look like little dots of corrosion, but when pressurized it leaks at an extreme rate. A possible cause could be Adel clamp chafing.

An inoperative elevator trim was found to be caused by a frayed cable jamming the trim drum. The elevator actuator arm (p/n 83515-02) was loose and free to move in all directions. All but one actuator arm-to-elevator rivets were sheared or loose. Jet blast or severe wind is believed to have caused the elevator to hit the stops with damaging force.

During an annual inspection the clamp between the turbocharger and exhaust (p/n: NH1000897-50) was found with a 4.5-inch crack along its circumference.

The engine experienced power loss, vibration and low number 2 exhaust gas temperature. Upon inspection, the number two cylinder exhaust valve (p/n 646286) was found to be missing about half its face.