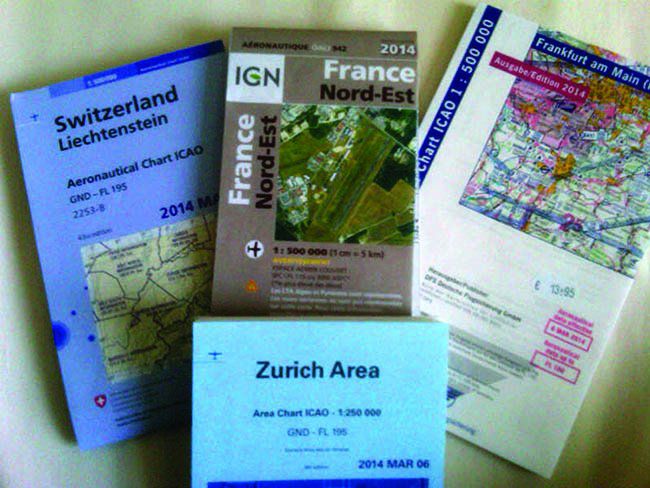 General aviation flight operations in Europe often are radically different from those in the United States, yet GA pilots across the pond face some of the same safety issues confronting pilots in the U.S. Meanwhile, European GA pilots and operators also must battle safety issues unique to Europe, including uneven infrastructure and high operating costs, which can limit training and proficiency flying. As a result, comparing GA in Europe to its counterpart in the U.S. offers some risk management lessons for pilots who are increasingly facing similar challenges, no matter their geographic location.

My exposure to European general aviation came late last summer as I traveled there for business reasons. Although it wasnt the primary purpose of my trip, I decided it would be a good idea to sample GA on that continent to compare safety issues with those in the U.S. My itinerary took me to eight countries. After some planning and research, I made arrangements to fly general aviation aircraft in Switzerland, Germany, and Luxembourg. A last-minute opportunity near the end of the trip permitted another flight in France. The sidebar on page 10 is a brief summary of my experiences.

Rules for visiting pilots
Rules for foreign visiting pilots have recently changed in the countries that are members of the European Aviation Safety Agency (EASA), a sort of super-FAA that often trumps the authority of civil aviation authorities (CAA) in individual countries. It is no longer possible to get a simple paperwork validation of your FAA certificate. Instead validation now means taking an oral and practical test with a person designated by an EASA or local CAA inspector, or designee. Your validation is only good for a year, during which youre encouraged to seek full conversion of your foreign certificate by taking a theory (knowledge) test and another practical test. I spoke with an official of the Luxembourg CAA while I was there and she confirmed that the best approach is to just fly with an authorized instructor.

This is the approach I decided to follow, and Im glad I did. All the instructors I flew with were accommodating and provided valuable feedback on local safety issues. Generally speaking, I also let them run the radios (more on this later).

Typical hazards and risks
There is nothing new under the sun and the inventory of hazards and risks faced by European GA pilots is similar to those in the U.S., although the presence of these hazards may significantly vary in scale from the U.S. operating environment. The hazards and risks run the gamut of the familiar PAVE acronym (Pilot, Aircraft, enVironment and External pressures). The top six risks and operational considerations I identified in European GA emphasize environmental hazards; I present them with what I consider the most-critical first.

Airspace: The skies in Europe are not exceptionally crowded around GA airports, but youd never know it looking at the airspace clutter on aeronautical charts. In most places, you will find multiple overlapping layers of Class C and D airspace, military operating areas and various kinds of prohibited areas. As I was operating VFR, and accustomed to operating in wide-open western U.S. airspace, I found myself spending a lot of time looking out the window just to confirm my position, never mind scanning for traffic or just enjoying the view. I would consider a good GPS moving-map navigator to be essential equipment, although only the Cirrus SR20 I flew was so equipped.

Weather: Generally speaking, statistics show weather in Europe is not as good as in many areas of the U.S. (although in the nine trips Ive made to Europe since 1989, I seem to have experienced better-than-average conditions). I was able to fly in acceptable VMC conditions on the planned four days during last years trip. Ironically, an instrument rating is much harder to earn in Europe than in the U.S. Whether its a cause or an effect, I dont know, but much less IFR flying is done in piston singles in Europe than in the U.S.

Terrain: Europe is a hodgepodge of interesting terrain and, in many respects, its like operating in the western U.S. As you would expect, I found the most challenging terrain to be in Switzerland. Combined with weather hazards and the rarity of IFR operations/ratings, the result often is a clear no-go situation in a small piston single.

IFR infrastructure at smaller airports: As another data point regarding the comparative lack of IFR operations in piston singles, I found most of the very small general aviation airports do not have any published instrument approaches. This obviously limits their utility for any kind of serious travel and forces GA pilots to use larger airports, where the fees are higher. Again, the question of cause and effect is raised: Are there few instrument approaches at these airports because theres no demand, or is the scarcity of IFR operations a result of there being few approaches?

VFR infrastructure at smaller airports: Europe has more GA airports than I expected, but in my experience many of them are unpaved and relatively short, less than 2000 feet long. Additionally, many have obstructions and nearby noise-sensitive areas to consider. And in sharp contrast to most non-commercial airports in the U.S., I found that even the smallest European airports have published VFR arrival and departure procedures with which pilots are expected to comply. Somewhat unrelated to flight operations, but another telling infrastructure-related data point is that ground transportation, such as rental cars, is not always available at the smallest airports. Again, this obviously limits the airports utility and the overall attractiveness of GA as a personal transportation mode.

Pilot currency: This could be the biggest hazard of all for European GA pilots, but in my discussions with instructors they stated most pilots mitigate the risks by limiting their operations if their currency is not sufficient. That should be the way its done everywhere. Both EASA and the individual CAAs in Europe require pilots to fly at least 12 hours per year to maintain a valid certificate. Im told most European GA pilots struggle to maintain even this level of activity. For the record, I consider 12 hours a year to be wholly inadequate to maintain proficiency for virtually any solo flight operations. In considering my own recently decreased activity level, Im working to determine what a minimum level of activity should be-it most certainly is more than 12 hours a year. Of course, many variables affect proficiency. Its a subject Ill explore in the future.

Thats the dirty (half-) dozen of operational risks and considerations for GA operations in Europe. A key question is how they affect the safety outcomes, especially in comparison to the U.S. For some answers to that question, see “Top Five General Aviation Fatal Accident Causes In Europe And The U.S.“

Working into it
At this point, U.S.-based readers probably are wondering whether they ever would want to fly a GA airplane in Europe (even as our European readers are writing a comment). If the opportunity ever presents itself, you should definitely consider doing it. Youll be welcomed by the small aero clubs and the rewards are many. If you want to operate GA airplanes without a local instructor aboard, thats another matter, but it is possible. The following points summarize the main steps you might take to transition into this unique operating environment. Theyre also reasonable to consider when transitioning to any new operating region, no matter its country or postal code.

Familiarization: Obtain some charts of the countries and areas in which you may want or need to fly and do a little armchair planning to become familiar with airspace, airports and relative distances before you arrive. Its never a bad idea to grab a local instructor to familiarize you with local airspace, customs and hazards. Just go ahead and plan on flying in Europe with an instructor for some time if you want to eventually obtain a full EASA conversion of your FAA pilot certificate.

Keep it simple: Start with short local flights, to become familiar with procedures, airspace,and operating conditions. If ultimately planning to fly cross-country flights, work into that slowly also. Its also probably a good idea to avoid IFR and night operations initially, even after obtaining a converted EASA instrument rating. Unless youre fortunate enough to be flying your own aircraft or one with which youre very familiar, stay with a simple single until you gain experience and the mission demands a more complex aircraft. Trip lengths in Europe can be shorter, so a faster aircraft isnt always essential.

Language: When IFR between towered airports, English is the universal aviation language, but it can include a variety of speeds, accents and delivery patterns. Dont be afraid to ask for a repeat if you dont understand the controller, who may not understand you, either. When under VFR between non-towered airports, English isnt common; you need aviation fluency in the native language. Cest la vie.

Above all, remember that risk management is just as important in Europe as anywhere else. Remember to identify, assess and mitigate risk both before departure and continuously while in flight.

Lessons for U.S. operations
Are there any lessons from European GA operations that might apply to flying in the U.S.? Yes, but theyre no huge mystery: They all revolve around basic risk management procedures.

If you usually operate in north central Nebraska and plan on flying to either U.S. coast for the first time, you may expect to find conditions similar to European GA operations. For example, the northeast U.S. has complex airspace and challenging weather. Flying westbound, youll find challenging terrain, fewer airports, longer trip lengths and weather conditions that arent much of an issue in Europe.

A final issue is maintaining proficiency with very low levels of flight activity. I found this situation prevalent in Europe-it may be migrating here as fuel costs and a stale economy exact their toll. It is already affecting the U.S. general aviation community, and you should be conscious of the deterioration in your flight proficiency with very low activity levels.

In the final analysis, the ability to operate general aviation airplanes safely in any environment boils down to being a good risk manager. Remember that and you can adapt and succeed in any aviation setting.

Robert Wright is a former FAA executive and President of Wright Aviation Solutions LLC. He also is a 9600-hour ATP with four jet type ratings, and a flight instructor. His opinions in this article do not necessarily represent those of clients or other organizations he represents.