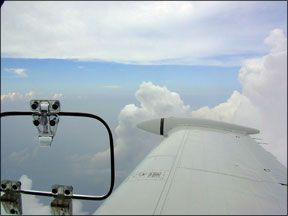 I doubt I ever flew higher than 4500 feet while earning my private pilot certificate. I remember 9000 feet as “high-altitude flying” when working on my instrument rating. Perhaps it was a function of the training environment, or a result of piloting low-powered airplanes. I think more likely it is expediency and the “little-plane” mindset that causes most training to be done at lower altitudes. Which begs the question: Are there any advantages to flying higher up, and if so, how should pilots plan for higher-altitude flight?

Many pilots have found theres a “sweet spot” for cross-country flying, above the general crowd but below the realm of turbine airplanes, where traffic is scarce but the advantages are many. This is flight in the mid-teens (of altitude), which Ill define as anything from about 12,000 feet to 17,500 feet MSL. Here youll avoid much of weathers worst, enjoy almost-certain direct-to routing and overfly the majority of “ATC required” airspace.

What are the advantages of flying between 12,000 and 18,000 feet? Probably the biggest one is youll usually find clear air. I find the mid-teens to be especially advantageous when flying in areas of forecast thunderstorms-usually youll be above the general haziness and murk abounding on the muggy days that promote thunderstorm development, allowing you to see and maneuver around the big build-ups from dozens of miles away.

Mid-teen flying often puts you in less turbulent air than the skies down below, and the airs much cooler, improving pilot and passenger comfort. Its much less stressful to cruise in VMC, so mid-teen flying can reduce fatigue and workload. Be careful, however, to avoid overflying weather thats outside the certified capability of your airplane, or that youre not equipped or experienced enough to handle if an engine or instrument malfunction forces you to descend from your planned cruising altitude (see the sidebar, “Unplanned Descent,” on page 14).

Sometimes it makes sense to fly under visual flight rules. The mid-teens support VFR flying by keeping you above the tops of Class B, C and D airspace-you can fly directly over the top of even the largest airports without talking to ATC if you want to. Its still prudent to monitor ATC frequencies for the area; its even safer to participate in VFR Flight Following if controllers workload permits. But you dont have to ask for clearance “direct” if youre flying VFR above the tops of clearance- or contact-required airspace.

Whether VFR or IFR, one of the best reasons to fly in the mid-teens is the reduced amount of traffic. Not only can you usually see better at these altitudes, theres less to see and avoid-most piston traffic is flying lower, down in Indian Territory, where the Cherokees are and where you used to fly-and the turbine crowd tends to fly higher up (although some turboprop pilots may enjoy the advantages of the mid-teens as well, especially when bucking stiff headwinds). The result is lowered collision risk and almost universally available “direct-to” routings. And, at these altitudes, youre virtually assured radar contact all the time.

Altitude, of course, is your friend. Mid-teen flying by definition gives you lots of altitude above terrain (with the exception of the highest mountains). If youre flying a single-engine airplane at 15,000 feet and its power-off glide performance is two nautical miles per 1000 feet, youll be able to glide up to 30 miles if the engine quits. Thats a lot of time to figure out things or radio your intentions to rescuers, and a lot of options for finding an airport if you cant get the engine restarted. Twin-engine airplanes will drift down to their single-engine service ceiling (adjusted for conditions and weight) if you shut one down in the mid-teens, but youll have plenty of time to evaluate your options.

Finally, depending on how you define performance-groundspeed, fuel economy-you may see distinct operational advantages to flying in the mid-teens. Lets take a more detailed look.

One of the advantages of flying in the mid-teens is the thinner air permits the airplane to fly at a faster true airspeed. You may recall from your training that TAS increases at roughly two percent per 1000 feet of altitude for any given power setting. Further, maximum aircraft range is obtained by flying at an optimal angle of attack. Since most of us dont have angle of attack sensors, we have to use indicated airspeed as an approximation.

The velocity for best range, VBR, actually approximates the angle of attack, providing the greatest available distance for the amount of fuel burned. This turns out to be roughly five percent above the “best glide” speed of an airplane, corrected for weight (as airplane weight goes down, best glide and VBR go down as well).

The key here is that VBR is a fairly low indicated airspeed-which is what youre likely to see in the mid-teens, especially with a normally aspirated (non-turbocharged) engine. Meanwhile, at these altitudes youll get the maximum true airspeed for a given indicated airspeed. Since most of us are not trying to fly maximum-range missions but would like to get the best combination of true airspeed and low fuel burn, this means the mid-teens may be the most efficient place to cruise. If your airplane is turbocharged, you can get the same effect by throttling back to whatever power setting gives you VBR at the altitude you choose.

When we think of flying high we usually think about wind. If youre going the right direction relative to weather patterns aloft, you may net a whopping groundspeed with the help of strong tailwinds. Of course if your wind-direction luck is like mine, flying in the mid-teens may not always be worth the other advantages.

Itll take some time to get to the mid-teens. Most piston-engine, cross-country general aviation airplanes will be able to average 750 feet per minute cruise-climb to about 8000 feet, 500 fpm from there to 12,000 feet or so, and maybe 300 fpm to 15,000 feet. Turbocharged engines will permit more rapid climbs, maybe an average 750 fpm all the way to 15,000 feet-this was certainly true of a fairly heavy turbocharged twin I used to fly. Figure, then, close to 30 minutes to reach 15,000 feet from sea level in a normally aspirated airplane, or 20 minutes with turbocharging. At an average 120-knot groundspeed during cruise climb, that means 60 miles downrange during climb (40 miles if turbocharged); if winds hamper your groundspeed down to 90 knots youll cover 45 miles or 30 miles, respectively. Of course, you need to calculate performance for the specific airplane youre flying to derive rules of thumb for your operation.

Generally youll want to descend no more rapidly than about 500 fpm in an unpressurized airplane, especially if you have passengers. From 15,000 feet to a 3000-foot initial approach altitude means 24 minutes of descent; top-of-descent (TOD) then is 72 miles out if your groundspeed averages 180 knots, or 60 miles out at an average 150 knots ground speed. Sometimes, getting a continuous descent from ATC can be a challenge.

For a high-powered but non-turbocharged airplane, you might need about 130 miles just to climb and descend to and from 15,000 feet under some conditions. Obviously, youll have to consider whether the distance youre flying makes it worthwhile to climb into the mid-teens, or that one of the other factors-weather or airspace avoidance, smooth, cool air or tailwinds aloft-support mid-teen flying.

I had a roommate in Air Force missile qualification school who had washed out of pilot training: Every time he flew the (unpressurized) T-37 basic training jet above about 12,000 feet, he had excruciating pain in the back of his lower jaw. The problem later was traced to some childhood dental work that left a small pocket of air trapped within a filling. As outside air pressure dropped with the increase in altitude, the trapped gas within his tooth expanded, putting pressure on the surrounding nerves, until the pain was so great my friend could not concentrate on the lesson. A quick dental job eliminated the trapped air and solved the problem but, in typical military fashion, he had been eliminated from flight training by that point, and was ineligible to reapply.

As you climb into the mid-teens, trapped gases resulting from dental or surgical work may cause you or your passengers discomfort or, in extreme cases, complete incapacitation. So dont make your first few sojourns to the higher altitudes without a trained pilot at the other set of controls, just in case.

A more transient, but still painful and potentially debilitating type of trapped-gas pain results from sinus infections and blocked Eustachian tubes. Eustachian tubes are the vents from behind your eardrums to the back of your throat that allow pressure to equalize on either side of the eardrum. Sinus infections and run-of-the-mill head colds cause swelling of these tubes, leading to blockage, which is one reason were warned not to fly with sinus blockage or a cold.

Some gastrointestinal conditions can trap large pockets of gases in your system that become completely debilitating at altitude. So even if you can honestly self-certify yourself as medically airworthy, dont fly in the mid-teens if you suffer from a stomach ache or other gastrointestinal ailment.

Watch for signs of discomfort in any passengers you take to the mid-teens with you. Sometimes passengers dont want to tell you theyre uncomfortable until its too late. If you find yourself or a passenger suffering from physiological effects of trapped gases, make a smooth descent into thicker air and see if the problem goes away. If so, continue at the lower altitude, adjusting your route as necessary for terrain, weather and a change in en route fuel burn.

Evolved gases are those that form in your body as outside pressure drops. Usually these gases naturally vent out of the body, sometimes making mid-teens flying an organic, albeit embarrassing event. Avoid eating “gassy” foods for a day or two before a flight, and advise your passengers to do the same. This is why pilots are warned not to fly within 24 hours of making an underwater dive; divers know “the bends” as an excruciating result of nitrogen gas evolution caused by ascending too rapidly, and even if youve carefully timed the trip back up from your dive you may not have purged all the nitrogen from your bloodstream. Climb too rapidly or too high in an airplane before that gas is purged or reabsorbed, and youll get the bends at the same time youre trying to pilot the aircraft.

Is it worth it?

Ultimately the decision is yours. You may find that, in the right airplane and on the right mission, it makes sense to climb to the advantages of the mid-teens. Certainly its a good option to consider.