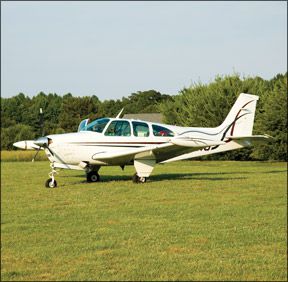 My first time landing on something other than pavement was with an instructor in a Piper Arrow. I had yet to earn my private certificate, and we were out doing a combination of familiarizing me with a complex/high-performance airplane and transporting some items for the FBO. The most memorable occasion also involved an instructor: We were returning from a spin-training session to a grass strip just

soaked by a passing shower. He landed long, locked the 152s brakes in standing water and we sluiced our way to within 30 feet of the fence at the far end. More than anything, that was a demonstration of how not to do it.

While I prefer pavement, a good grass strip is a pleasant experience if handled correctly. Some of my most enjoyable flights have involved grass and theres little to fear if with a little planning. But you do need to handle the airplane differently, especially during ground operations and takeoff. Lets go through it.

Presuming youre not based at or departing from a grass strip, the first thing you need to do is verify its condition. Ideally, youd drive out and walk it, but thats impractical too often. Another option is to speak with someone whose opinion you respect about it. If thats not an option, you still have a couple of aces up your sleeve.

First thing you can do is rather old-fashioned: Pick up a telephone and call the fields owner or management and ask them about its condition. If youve never been there before, this also is a good time to ask about any local rules or procedures, plus landmarks to help you find it. (Grass fields you can land on have a tendency to look very similar to those you cant.) These days, with GPS leading us around by the nose, finding the field is less of a challenge than it used to be.

Even if you have recent, verified knowledge of the fields condition, no one should object to making a low pass-or “dragging” the field-before landing. Doing so also is a good opportunity to practice your approach, so execute a low pass just as you would when planning to land, with gear and flaps extended.

The idea is to get down and slow, while examining the surface for any unknown hazards. You may want to offset to the side, allowing you to get an unobstructed view. While youre at it, of course, youll get a good sight picture of what the actual approach and landing will look like. Be sure to announce your intentions on any CTAF, especially if its a busy field.

Its obvious, but pay particular attention to any soft or low spots. They can be deceptive. Ideally, the landing area will be well-crowned, allowing any recent rains to drain off to the sides. When operating on the runway itself, stay on the crown.

One of the first mistakes soft-field newbies make when using a grass strip is thinking their approach should somehow be different. It shouldnt, with the possible exception of maintaining strict airspeed control. Obstacles at the runways approach end should be dealt with using your normal technique. In any event, a good landing is usually the result of a good approach, so bring your best game.

Most grass strips arent the longest landing areas youll ever see, so establishing and maintaining the correct speed on final is critical. Of course, youll use full flaps-even with a crosswind-for several reasons. The reason to use full flaps is to enable you to get as slow as possible. By this we mean using the manufacturers recommended soft-field approach speed, if any. In the event one is not published for the airplane, use the normal max-gross short-field approach speed, modified according to your weight (i.e., use a slower speed when light). The objective here is to touch down at the slowest possible landing speed, and you just cant do that without using full flaps.

Once youre a couple of feet above the landing area, youll likely still have some excess speed, since youll be in ground effect. Hold it off as long as possible and never try to force the airplane onto the turf. If you see that fence looming ahead, just add full power and go around, using that aborted approach as a lesson on what you did wrong, then correct your errors on the next one.

If we havent made it clear enough by now, you want to touch down at the slowest possible speed, on the main gear. You want to fly the airplane onto the surface, not let it stall or drop in. If you havent had recent experience in ground effect or always stall it in, it would be a good idea to practice this technique on pavement before applying it on turf.

In a tricycle-gear airplane-especially a single with limited prop clearance-you want to lower the nosewheel to the turf on your own, rather than letting it drop as the pitch control loses effectiveness. This usually requires a little bit of power, so plan on adding a touch of throttle on touchdown-blow some air over the elevator-to enable greater pitch authority and ensure you control when the nosewheel touches. Once it does, smoothly reduce power and apply maximum nose-up pitch to keep the nosewheel light.

Especially if the grass is tall or the ground relatively soft, youll decelerate quite nicely without needing the brakes. In fact, wed strongly recommend planning to stay off the brakes entirely while operating on grass, with exception of a rolling run-up when departing. An obvious exception is a short, hard strip without much grass. In any event, the pitch control should be fully aft, raising the nose, extending the nosewheel strut and clearing the prop as much as possible. Even the best-maintained turf field has dips and you dont want to be mowing the grass or doing any landscaping with that expensive prop.

Instead, you want to keep moving, and taxi to the parking area without stopping. Once there, position the airplane where you want it-pushing and pulling an airplane on turf may require more people than you have available-perform a normal shutdown and secure the airplane as necessary.

When departing, the same considerations you used for arriving come into play, but differently. Before starting the engine, pay particular attention to the area where the airplane is parked. If its soft, consider towing the airplane to higher, harder ground. There are few things worse-or more embarrassing-than getting all buttoned up, starting the engine and finding you cant power yourself out of the parking area.

But before that, you need to ensure the area between the airplane and the runway is clear of obstacles. Thats because once the engine is running and you start to taxi, you dont want to stop. Plan to perform the run-up on the roll, and perform all the other before-takeoff checklist-controls free and correct, pitch trim, seatbelts, etc.-items before taxiing. Even on hard ground, youll need higher-than-normal “breakaway” power to get rolling and taxiing at a normal speed will require more than on pavement.

Just as when taxiing after landing, you dont want to stop, even for a run-up, but you do want to taxi slower than when on pavement. Walking speed is a good velocity for which to aim, as long as you have enough momentum to avoid stopping. Again, the key here is protecting the nosewheel and the prop, so the pitch control should be fully aft.

Once clear of the parking area, and presuming the engine is warm enough, perform the run-up on the roll. Youve already done most of the before-takeoff checklist items and configured the flaps prior to taxiing, right? For many airplanes, this might mean using a touch of brake pressure to keep from taxiing too fast, but its probably the only time you should be using the brakes on a turf runway.

As you taxi to the departure end of the runway and after the run-up is complete, keep moving. By now, you should have verified the runway is clear of obstacles and theres no conflicting landing traffic. Once youre at the end of the runway, smoothly turn to align the airplane in the takeoff direction and bring up the power.

Youll already have the pitch control sucked into your gut-right?-and, as the airplane accelerates, the nosewheel will get light. Let it come off the ground, but only slightly-relax your back pressure to establish and maintain a slight nose-high attitude with the nosewheel off the ground. When its ready, the airplane will fly itself off the ground. Youll be in ground effect, so lower the nose to a level attitude and accelerate. Once reaching your desired climb speed, pitch up to hold it and climb out. Retract the gear after establishing a positive climb rate, then the flaps after getting some air beneath your wings. See how easy that was?