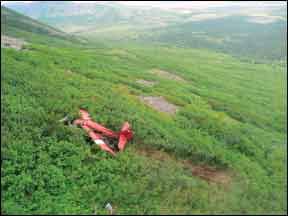 Controlled flight into terrain, CFIT, accidents afflict pilots of all skill levels-those with rookie-level experience and those with more than enough experience to know better than to fall into the traps leading to an abrupt, final, premature arrival. According to a review of NTSB records, more than 40 CFIT-related accidents occurred in the 10 years ending in 2010. And theyre unforgiving and deadly, with 39 of 43 incurring 112 fatalities.

The senselessness of one such accident prompted a former NTSB staff member to suggest a review of the probable-cause report issued in an October 2009 crash. The former staffer felt the abbreviated report left a few questions unanswered; the NTSBs probable-cause cite in the final report read with characteristic candor, citing “the pilots decision to continue VFR flight into instrument meteorological weather conditions which resulted in controlled flight into terrain.” He felt lessons of that report warranted more awareness among the pilot community. So what common mechanism leads to these deadly outcomes? Why, indeed, do pilots fly their airplanes into the ground in controlled flight, despite tools and warning systems, charted altitude minimums and lifetimes of professional flight experience?

“Experience counts” is a common truism. But the truth is even highly experienced pilots fail to exercise common-sense judgment and fall victim to simple mistakes. Some mistakes-missing a frequency, or even forgetting to put down the gear-usually arent lethal. But other, more egregious errors can lead the pilot-and his passengers-to a premature arrival with severe consequences. When a perfectly good airplane is flown, under its pilots control, into the ground, a mountain, water or an obstacle, the outcome rarely is good. Such an event is called controlled flight into terrain.

The pilot of the ill-fated October 2009 flight retired years earlier from a career as an airline captain after accumulating more than 22,000 hours-including hundreds in the Piper Comanche 250 he and his wife were flying when the plane struck high terrain on a cross-country flight from St. Johns, Ariz., to their home in Aguila, Ariz. My contact-also an air transport pilot with type ratings in a number of jets and the part owner and frequent pilot of a piston-single-expressed incredulity at the finding.

“Why controlled flight into terrain when he couldve just climbed? “He knew better than that.”

The truth is CFIT happens because of a variety of circumstances. Experienced pilots-like the one in command of the Comanche-as well as less-experienced but well-seasoned airmen (pick one or more) bust approach minimums, deviate into terrain or simply lose their situational awareness.

According to the Flight Safety Foundation, CFIT accidents result from a variety of catalysts and precursors. As with most accidents, CFIT is but the concluding moment of a sometimes-lengthy chain of other errors. As such, CFIT doesnt always lead the probable-cause reports.

There does seem to be a CFIT pattern, however: navigation errors; non-compliance with approach or departure procedures; altimeter setting errors; misinterpretation of approach procedures. Misinterpretation of and non-compliance with clearance instructions also contribute to these accidents. So do limitations of the flight director/autopilot and mistakes using a flight-control system.

The 2009 Comanche accident carries many of the marks of a simple judgment mistake that evolved into the fatal error-failure to heed the minimum clearance altitudes posted in the grids of VFR charts and descending-instead of climbing-even with full knowledge of the high terrain in the area of the accident.

Our example accident occurred after the pilot started making new decisions in response to new circumstances-observed as lowering ceilings. In his wisdom, the pilot-instrument rated, to be sure, but of unknown currency (logbook destroyed by fire)-sought to avoid VFR flight into IMC conditions.

The flight, just a few minutes and 50 miles prior to the crash, had been at 8500 feet msl-just high enough to clear the Bradshaw Mountains en route to his destination. As the ceiling dropped, the pilot descended, first below 7000, then below 6000-while over terrain with peaks ranging from just under 7500 feet msl to nearly 8000.

As a resident of the area, the pilot should have known the challenges of those mountains. Yet he told an en route controller he was “going to be drifting down just a little bit lower to stay under the clouds.”

That was the last contact; reported overdue, searching couldnt begin immediately because of conditions. But observer stations reported a fire in the mountains, prompting authorities to dispatch firefighters to the location of the smoke observed the next day. The firefighters discovered the Comanches wreckage spread across about three burning acres of mountainside. The elevation was 5250 feet msl.

What would have avoided this outcome? Was our ATP in the Comanche worried about icing in the clouds?

When Up Beats Down

A friend consulted for this articles-a professional who has flown charters in Skylanes, Bonanzas, King Airs and a couple of jets-chipped in his instant analysis during a recent hangar-flying session: “Nothing in this scenario a climb couldnt fix; so why didnt he?”

Remote weather observation stations in the vicinity of and at altitudes near the crash location recorded temps well into the 50- and 60-degree F range, even at elevation. “The ceiling squeezed him toward terrain, the sky was open a few thousand feet up, and the clouds were warm and wet…warm…no airframe ice possible.”

Was this retired airline captain caught up on the thorns of legality? Legal, illegal, in this case it was safer up than down. Every private pilot, CFI, ATP challenged answered the same.

The Flight Safety Foundation and several training-company CFIs all noted the same issue: Everything about CFIT is covered in their training curricula-they train to combat those errors in processes and procedures.

“What we cant seem to eliminate is the brain fart,” one pointedly explained. “Check lists, cockpit-resource management training, cross-checked procedures-they only work to a limit in two-pilot cockpits and cant cover all the ways we screw up as single pilots-and confusion or overconfidence are often at the core.”

And if this example was the only one pilots ever faced, there would be far fewer CFIT reports in the NTSB files, but flatland-flying is hardly kinder. One CFIT accident in the middle of the last decade took the life of a long-time GA pilot-who “drifted down” below the glideslope hoping to find the airport after one missed approach; he found treetops, instead, and died in the crash which destroyed the Mooney he was flying. Could the business appointment awaiting the ill-fated pilot have colored his judgment?

A mistake dialing in the altimeter setting can leave you too high to see the runway, when the mistake puts you higher than the dial says, and that can be problematic. Youll not see the runway where you should-but at least you wont hit the ground if you observe the minimum altitude.

Mis-setting the altimeter the other way puts you at-risk en route and on approach-with the very real possibility of hitting the ground long before you even expect to see the runway. Even so, setting the altimeter correctly still leaves pilots subject to a premature arrival when they decide “to take a look” below where the plate says they should.

First off, even a small error in the altimeter-even a correctly set one-could convert that last look intention into a last-flight reality. Second, unless youre comfortable and confident betting your life on your lateral position, going below recommended minimums could turn that look attempt into an obstacle encounter.

Seriously. Can you honestly say your GPS is that good, or the last VOR check was close enough to spot on to make the prospect of a lateral error unlikely?

According to the latest Nall Report from the AOPA Air Safety Institute covering the year 2009, four cruise-phase accidents resulted in fatalities-three of them involving loss-of-control, with one, our accident example, involving CFIT. All involved continued VFR flight into IMC conditions, prompting the ASI to comment, “Attempts to fly by visual references in instrument conditions continue to claim pilots at all levels of experience and, worse, their passengers. Those without the training to fly by instrument references are highly susceptible to spatial disorientation culminating in the loss of aircraft control, while instrument-rated pilots have a better chance of maintaining controlled flight until they hit structures or terrain. (emphasis added)

“The results are equally deadly either way: Over the past 10 years, 86 percent of VFR-into-IMC accidents have been fatal, causing 518 individual deaths.”

We can add others: failure to properly prepare for a long flight and/or ignorance of terrain elevation-en route and, in particular, when forced to change routes.

Learning about how CFIT accidents happen also tells us how to avoid them. The quick answer is to learn, file and fly with the instrument rating if using an aircraft for transportation. The most obvious way to prevent a CFIT accident is to never fly. While that time will come for all of us, using the IFR system within its limitations will get us where we want to be without smacking into something.

For example, our Comanche pilot easily could have air-filed and motored home with an approach clearance, even if his recent experience didnt meet the letter of the law. And theres always the “E” word. Either way, chances are nobody would care. Meanwhile, ensuring our altimeter is properly set and adhering to published DA, DH and MDA values when on approach, and staying at or above minimum safe altitudes like the MEA will go a long, long way toward keeping us out of the weeds.

Finally, cockpit distractions are just that: distractions. They shouldnt be allowed to divert our attention from the most important task: flying the airplane.