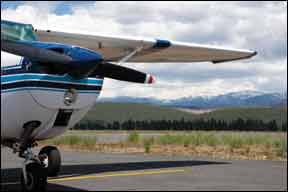 By the time student pilots near the practical exam, they’ve usually got a pretty good idea of how and why to calculate density altitude (DA). If they’re lucky, they’ve even done some high-altitude takeoffs with an instructor, or at least simulated DA’s effects by using much-less-than-full power settings on a few takeoffs.

Those tables and graphs overlook an important characteristic of the air in which we’re trying to fly: its humidity.

Density Altitude 101
Two classic concerns with mountain flying are density altitude and pressure altitude. Actual altitude doesn’t affect aerodynamic performance. Most of us plan our high-elevation arrivals and departures as early in the day as practical, and are extra attentive on warmer days when seated behind a normally aspirated engine. While reduced horsepower is certainly one reason to be wary of high-DA situations, the thinner air also means higher true airspeeds—and lower indicated ones—resulting in the airplane “thinking” it’s higher than it really is. The impact is felt through mushier controls, since  there are fewer air molecules flowing over them. There’s also an impact on propeller efficiency, since its blades are airfoils. The net effect, of course, translates into longer, faster takeoff rolls.

We were trained early on to look at charts or tables relating takeoff distance and (often more importantly) distance required to clear a 50-foot obstacle. These are generally based on pressure altitude, and can be given for different gross weights. Our instructor probably stressed these values were determined by excellent test pilots flying new aircraft. As neophytes, we were taught our personal performance would fall short, requiring generous safety margins.

Despite the widespread awareness of density altitude’s effects, pilots routinely attempt high-DA takeoffs and don’t succeed. A June 30, 2012, in-cabin video made during a Stinson Voyager’s attempted takeoff from Bruce Meadows airstrip near Stanley, Idaho, is an excellent example. The airplane’s extended takeoff roll was the first clue something was amiss; that it never climbed much beyond ground effect was another. Flying toward rising terrain, it eventually hit trees, leaving all four aboard with injuries; the pilot’s were serious. That video went viral on the Internet and is a very good example of how DA can affect takeoff and climb performance. If you’re one of the few people who hasn’t seen it, visit youtu.be/OVM3RRd1vf0.

Although the video is instructive, it’s also somewhat disappointing. That’s because the methods and tools to use in calculating DA also are well-known and readily available, usually “baked into” the performance section of the aircraft’s AFM/POH. Yes, early, pilots of vintage aircraft like the Stinson may not have comprehensive takeoff performance charts or tables in their paperwork. But other tools and calculation methods are available, including the tried-and-true, “It’s too hot and too high. Let’s wait for cooler temperatures.”

Of course, temperature and altitude combine to produce high DAs. The wise pilot, familiar with things like low tire pressures and refreshingly honest about his or her skill with max-performance takeoffs, will add a fudge factor when calculating the airplane’s runway and climb performance. High relative humidity should also trigger a fudge factor reflex.

Available horsepower for an aircraft with a normally aspirated engine depends heavily on the surrounding mass density of oxygen (O2), and this cannot be determined by pressure altitude alone. That’s because when we experience high relative humidity, water molecules directly replace those of dry air, including O2.

Internally generated engine horsepower depends on the mass of oxygen taken in per time unit, for this limits burn rate and after efficiency loss, the available horsepower. For a normally aspirated engine, this oxygen mass rate depends on rpm, air density and the fraction of air that is oxygen.

Useful horsepower—that which actually reaches the propeller—always is less than what’s generated internally. That’s thanks to numerous internal losses that include such things as fluid film drag on journal bearings and piston-ring/cylinder wall friction, as well as external losses resulting from turning accessories like vacuum pumps and alternators.

At a given rpm and engine temperature, this lost power is largely altitude-independent. (To see this relationship stated mathematically, use Equation 1 in the sidebar below.) In this equation, power loss due to friction becomes waste heat. High-elevation operations using normally aspirated engines come to the party with less internally generated power, but the loss is essentially the same as is experienced at sea level. The reality created by these effects is that internally generated power falls off in near-proportion to that of oxygen density, while the useful power falls off somewhat faster.

Each constituent gas within air has a pressure component that is simply the volumetric fraction multiplied by ambient barometric pressure. The math for this is expressed in Equation 2 on the previous page.

This means that if dry air at a given temperature and pressure has some volumetric fraction of another gas (e.g., water vapor) added, then we lose that same fraction of each component dry air gas, and available horsepower is lost as a result. This is the point at which humidity begins to affect horsepower.

The Society for Automotive Engineering (SAE) specification J1349, published in August 2004, gives a hint at this issue, correcting normally aspirated horsepower to a Detroit standard equivalent with another formula. It converts observed horsepower at a given temperature and dry air partial pressure to what would be measured in Detroit, and is useful at ambient pressures where most cars are made, e.g., well over 900 millibar, or less than 3000 feet msl. The SAE’s formula, plus an explanation is available online at tinyurl.com/avsafe-sae.

For example, if you observe 200 hp on a dynamometer at a facility with a 23 deg. C (~73 deg. F) temperature at an ambient pressure of 950 millibar (about 722 mm Hg) and an absolute volumetric humidity of three percent (28.5 millibar in this case), then actual horsepower produced engine would be about 217 hp.
Similarly, dividing your aircraft piston engine’s sea-level horsepower rating by this correction factor gives you available horsepower at altitudes below 3000 feet msl.

At low ambient pressure, such as at a mountain airport, relative losses at the propeller due to friction increase, so the SAE’s correction method will overestimate available useful power. If that weren’t the case, your normally aspirated engine would continue running, albeit with reduced power, all of the way up to the edge of space. This useful power loss ratio depends on engine specifics, as well as the non-propeller attachments, such as your generator.

Humidity’s Effects
Now that we’ve established some basic metrics for determining horsepower at the propeller, let’s look at the impact humidity can have. To get there, first we need to define a few things. Ambient pressure—the observed altimeter setting, for example—is defined as dry air pressure plus water vapor pressure and expressed as Equation 3 on page 9.

Okay, so we’ve drowned you in information, tables and formulas. We’ve convinced you humidity lessens takeoff power for a given pressure altitude. What should you do with all this, and still go flying, today?

A simple yet reasonable approach is to take dew point, which usually is readily available, and with it determine a new pressure altitude to be used in your density altitude calculation. You’ll need to subtract saturation pressure associated with this dew point (such as 21.1 mm for a dew point of 23 deg. C) from the barometric mercury level of your pressure altitude. For example, if your pressure altitude is 8000 feet, subtract 21.1 from 563.9, and use 542.8 mm to get an “oxygen equivalent” pressure altitude of just over 9000 feet. Then use your takeoff POH performance data accordingly to decide how much runway you’ll need and how much fuel, and how many passengers and their bags you can carry.

The effect of humidity on density altitude is pressure altitude-sensitive. For example, at sea level, subtracting 21.1 mm from 760 mm would produce a correction value well below 1000 feet msl. A normally aspirated aircraft’s performance is more sensitive to dew point at higher elevation airports.

Takeaways
What is critical is that internally generated horsepower (being proportional to oxygen intake) is a function of the dry air component of ambient pressure, and not simply pressure altitude, which is the sum of water vapor component and dry air pressures. Density altitude by itself also will not work because at a given total air density, the fractional density of oxygen drops with humidity.

While most humidity cases one encounters in the mountains are not as significant as the prior example (hence the wonderful phrase “dry mountain air”), extra attention should be paid when attempting a high-altitude, high-humidity takeoff. This can be determined without a local Metar observation simply by observing visible moisture or when an airstrip is near a lake, golf course, meadow or moist forest where localized relative humidity can be high and quickly vary along a flight path. Of course, the way one determines this during pre-flight planning when Metar data is available is a relatively close temperature/dew point spread, say three degrees C.

The difference of a few ponies under the cowling will sometimes change a positive climb rate capability in a relatively high density altitude situation to one that is essentially nil.

Scott Murray is a technical professional and an instrument-rated private pilot flying out of Hayward, Calif. His Web site is available at scottmurraysoftware.webplus.net.