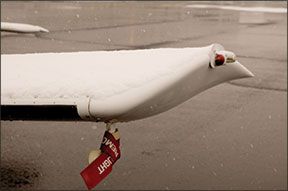 Ice isn’t nice. And this time of year, it’s much easier to find when airborne in most places throughout the Northern Hemisphere. Thankfully, forecasting and reporting technologies have improved over the years to the point where, at least in our experience, it’s rare to find ice where it wasn’t in a forecast. At the same time, even piston singles can be equipped for flight in known icing conditions, albeit briefly. All that is to say icing shouldn’t be the problem it used to be. Unless, of course, you’re off your plan, or the forecasters blow it.

The NASA Aviation Safety Reporting System (ASRS) recently published some reports from pilots who found icing the hard way. How they found it, the impact it had on their flight and what they did to overcome it are instructional and worth contemplating. We’ll look at three examples of icing encounters while operating common GA aircraft types, then look at some of the lessons we can learn from them.

Scenario One
Flying between cloud layers in winter weather can be a great way to avoid icing conditions. Problems can arise, however, when those layers combine and force us into clouds. If the outside air temperature is conducive to icing, you may have a problem. Add in a basic airplane with no icing protection and things can get interesting. According to the ASRS, this event involved a “low-time, instrument-rated Cessna 172 pilot.”

“Flight departed after receiving a weather briefing for the route of flight. Weather was VFR and predicted to remain VFR for the flight. A shelf of clouds started to develop about 1000 feet below the aircraft and ceilings about 2500 feet above the aircraft. In between the shelf and base, I could make out [the] airport in the distance, so I requested [a] VFR clearance on top to [the] airport. I received the clearance…and flew the vectors. The temperature was at 32 deg. F and I requested vectors that would not make me penetrate visible moisture.

“At this point the shelf merged with the bases and, prior to continuing, I looked behind…and saw a cloud rolling in behind the aircraft, almost as a curtain drawing, making it impossible to divert. I followed the vectors to the best of my ability, but was distracted, making it difficult.

“After penetrating a cloud, I noticed approximately ¹/8 inch of ice on the leading edge. At this point, I announced my icing condition to ATC and they gave me priority handling. Shortly after, I declared an emergency and ATC gave me vectors for the ILS. I tuned and identified the ILS and tried to track it, but I was unable to receive the glideslope. I then received vectors for the airport and descended to 400 feet agl. At this point I had closer to ¼ to ½ inch of mixed ice on the wings. I had visual on the airport abeam [the] runway…and circled to land using no flaps and had a smooth, safe landing.

“After landing, I proceeded to the FBO with airport rescue following me in. After examining the aircraft, the propeller was clear and the wings had about ¹/3 inch of ice extending about six inches aft of the leading edge.”
Despite his relative lack of experience, this pilot did a lot of things right, including communicating his predicament to ATC and handling the airplane gently. His instinct to reverse course was good, also, but was thwarted by the rapidly changing weather closing in behind him.

Scenario Two
While we’re not aware of any Cessna 172s equipped for known icing, even aircraft that are can get into trouble. In fact, known-ice capability isn’t a license to remain in icing conditions but a set of tools enabling us to survive long enough to extricate ourselves from them. According to the ASRS, an “ATP-rated Cessna 340 pilot with many thousands of hours in mountain flying” also experienced unforecast icing recently.

“IFR flight, VFR conditions most of the way with numerous contingency airfields en route. I had received current weather from FSS about 25 minutes prior; weather above minimums with lower clouds and higher overcast. Flight continued…between layers, overcast above, broken clouds about 2000 feet below, with no precipitation encountered…. We continued originally at 15,000 feet msl (filed altitude), [then] stepped down to 14,000 feet [and to] 13,000 feet per ATC clearance.

“I disconnected the autopilot and turned 180 degrees while descending to 12,000 feet msl, the MVA, in search of warmer air and to fly out of the IMC/icing conditions we had entered. While turning/descending, I declared an emergency with center and apprised the controller of our change in course/altitude. The aircraft flew out of IMC conditions at 12,000 feet and we terminated our emergency status with center.

“While inbound, approach control took down the icing info from our experience and passed it along, resulting in an icing Sigmet issuance. It is important to realize that the de-ice/anti-ice capability of prop-driven GA aircraft is inadequate to handle severe icing situations. I am convinced our immediate change in direction to reverse course was the correct response to the weather encountered. Always have an ‘out’ or ‘Plan B’ if weather conditions are different from forecast.”

Even with everything working, the de-iced Cessna 340 clearly wasn’t capable of handling this icing encounter. The pilot smartly turned around, presumably toward lower terrain, and descended as low as he could to get to warmer air.

Scenario Three
We don’t always encounter icing conditions while airborne, and they don’t always have to be a result of current precipitation or flying in clouds at freezing temperatures. At the same time, GA operators frequently use airports lacking full-time management, or even the equipment to expeditiously clear snow and ice from runways and taxiways. In our final scenario, an aircraft described by ASRS as a “private turbojet” approached one such airport and landed safely, only to find the facility wasn’t ready for his arrival.

“After a normal descent and ILS approach on Runway 21, I landed with a 20-knot right crosswind. Shortly after touchdown, I realized the entire airport property was covered with ¼ inch of glare ice. Braking action was nil and the aircraft could only be controlled with rudder, speed brakes and differential use of thrust reversers. The ice was not visible on final because of overcast conditions.

“Local FBO personnel told us of ‘ice’ on short final but this did not nearly describe the severity of the situation. The previous night’s rain had frozen a couple of hours before and runways were left untreated. I was able to bring the aircraft to a safe stop, however,

“I could not taxi off the runway to the ramp area. [I notified] approach of the situation and was towed to [the] ramp. There were no Notams issued, no information on ASOS and no information from approach regarding the airport condition. I would recommend the airport authority treat runways promptly or close the airport in such conditions while notifying pilots through Notam system, ASOS, or approach controllers to prevent an accident.”

This pilot apparently exercised a nice piece of airmanship to get down and stopped while remaining on the runway and without damaging the airplane. But his experience highlights for us that conditions on the ground can be affected by weather we didn’t encounter while airborne and have no reason to expect.

Lessons Learned
Perhaps the most important thing we can glean from these three experiences is ice is where you find it. Just because the forecast includes a potential for icing, that doesn’t mean we’ll find it. On the other hand, any time freezing conditions are encountered, frozen water can be found, also, sometimes where we least want or expect it. As these examples show, we can do everything right—short of staying on the ground—and still find ourselves confronting a nasty situation.

A second thing is these pilots apparently did everything right, also. The two who experienced in-flight icing got pre-flight briefings, planned and conducted their flights to remain clear of icing conditions and reacted immediately when it was encountered. They exercised their emergency authority, sought assistance from ATC and exited the icing conditions as soon as they could. They, plus the third pilot, used all the tools and equipment available. Also, the one who landed on an ice rink realized the problem and didn’t try to finesse it. He shut down and had the aircraft towed to the ramp, highlighting two final thoughts.

First, the weather and Notam reporting capabilities at non-towered airports may not be what we expect to encounter or have become accustomed. Features like runway striping, approach light systems, visual glidepath indicators, taxiways and FBO equipment may not be up to our expectations if all our flying is from one well-equipped airport to another. The second and final thing these reports tell us is that even if we do everything right, Mother Nature always can find ways to tell us not to mess with her.

Safely conducting winter operations can require us to be alert for conditions we may simply not encounter at other times of the year. No matter how surprising it may be to find icing where it isn’t expected, we need to react immediately, remember to fly the airplane, extricate ourselves from the conditions and use all the tools available—including altitude and heading changes, plus ATC—to get out of them.