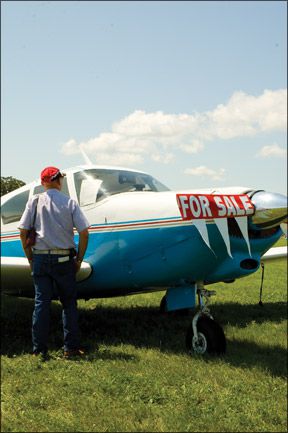 Years ago in a sleepy college aircraft economics class, we learned the pecking order of items to consider when acquiring an aircraft. The short list included the usual items of damage history, engine time, avionics, operating costs and a variety of other factors making obvious sense. But one aspect of aircraft acquisition we

werent taught is an issue thats gained prominence in the current sales climate: the consequences of buying too much airplane.

With used aircraft pricing at an all-time low, its easy to get sucked into a convincing fantasy that the airplane of your dreams is also one fitting your skills, operating budget and mission. A quick scan of aircraft sales ads reveals temptingly sweet deals on aircraft once way out of reach for owners with low-end budgets. If such a carrot dangles in front of your eyes, heres our advice to keep your dream and reality in check when stepping up to a bigger set of used wings.

Before we get into the nitty-gritty of handling a high-end aircraft upgrade, the buying process deserves some attention. We get calls nearly every day from prospective buyers looking for advice as they shop the ramps of used aircraft for the taking. Although buying an aircraft can be a challenging effort, were often surprised at how misinformed some shoppers can be-selecting aircraft that are hugely maintenance-intensive. Sadly, many of these owners get stuck with airplanes that stand true to their reputation-begging to be fed early and often in the ownership timeline.

We recall one fellow who traded his cherry Cherokee for a lemon because of the perceived speed and sex-appeal of a Mooney. It was an 80s-vintage M20J with a sharp red paint job but with an engine and avionics package that ultimately cost him upwards of 20 grand in repairs-all in the first couple months of ownership.

Had he hired experienced avionics people to eyeball the wiring and perform simple function tests of the autopilot and associated electronics, he would have passed on the airplane. The engine was neglected, too. A thorough pre-purchase inspection could have uncovered exhaust, fuel system and other deficiencies ultimately sending the once-proud new owner to a sales broker to unload the airplane within six months.

Another owner of a high-performance single was blindsided during what should have been a routine avionics upgrade to include an Aspen PFD. When the panel was opened up, they found a wiring mess requiring complete re-work and nearly a month of downtime. Even the static system couldnt pass inspection with broken and leaking static lines and fittings. This airplane was represented as having a fresh and modern avionics upgrade.

Bottom line is youve got to perform a thorough pre-buy inspection on any aircraft you buy-no matter how clean it looks on paper. This includes avionics inspections, too. What may seem like a state-of-the-art avionics upgrade could be a dangerous ball of wire behind the panel. Some sellers-particularly high-volume sales outlets-slap in modern gear to make the aircraft look desirable but our experience proves that many of the installs done on the cheap arent even airworthy. Wiring bundles chafing because they are wrapped around control surfaces, old wiring connected to new systems and installs lacking supporting paperwork are big risks to the new owner dazzled by sales ads.

Inspections should be accomplished by neutral parties, i.e., folks that have wrenched the airplane for years shouldnt be the ones performing the pre-buy. They are just too biased to offer advice you can take to the bank.

Its easy to fall in love with any flying machine. Maybe its sexy ramp appeal, raw speed or a big cabin. But buying an aircraft for all the wrong reasons could be the setup for disappointment. Like a mismatched personal relationship with a member of the opposite sex, a mismatched owner/aircraft relationship can be draining to your bank account and psyche.

For instance, do you really need a pressurized 250-knot cabin class twin for local weekend hops to dinner? One owner and his wife were attracted to the sexy ramp appeal of the Piper Malibu. And the buyers market had them seriously considering one. But when it came down to it, they realized their Piper Archer was the perfect machine for their weekend vacations to the coast, missions well under 300 miles round trip. Why buy all of that airplane, and the big maintenance headaches its

Choosing an aircraft with the right engine for your mission can save you grief and money. Classic is the buyer whos convinced he needs a turbocharged engine for flying low in the flatlands. Mountain flying and missions where you cruise in the teens is a different story. Otherwise, a normally-aspirated engine will likely be easier on your checkbook. The owner of a Turbo Centurion learned this lesson the hard way-with a bank account drained by replacing the turbo, all cylinders, exhaust, crankshaft and numerous other unplanned breakdowns despite his engines time of 600 hours since overhaul. Rarely did he fly the airplane above 10,000 feet or on long-cruise flights.

Still another T210 owner makes good use of his airplane: flying well over 100 hours per year, flying in the teens when appropriate and using the airplane for long-distance travel over mountains. Hes an experienced ATP and knows how to properly manage his engine. For him, this airplane makes perfect sense for the mission.

You might score that high-performance airplane for a song but you could be singing the blues when it comes to insurance costs and training requirements. Consider the purchase of a Cessna 340, a high-performance cabin-class twin.

By most standards this is a lot of airplane and insurance companies know it. For low-time multi-engine pilots with, say, 1000 hours total time, insurance will likely run $7000-plus for the first year with a million dollars smooth liability coverage. Youll also need professional training to qualify, which is a good and necessary thing. This is a complicated, high-altitude pressurized twin that demands skill and specialized training.

We spoke with a couple of experienced instructors who specialize in multi-engine training. All agreed that a cabin twin the likes of a 400-series Cessna, Piper Aerostar and even the smaller but pressurized P-Baron isnt the best idea for the first twin-engine airplane for low-time multi-engine pilots.

For some pilots, all it takes is a simple insurance quote to realize they couldnt afford to keep the airplane they can afford to buy, if this makes sense. One owner was ready to write a check for a late-model Cirrus SR22 until his insurance company quoted him $13,000 for insurance. Despite his 1000 hours of total time, he lacked an instrument rating the insurance company felt he needed to effectively and safely pilot the aircraft.

And then theres the dilemma of finding quality training. For many higher-caliber machines, youll need specialized training of sorts. You might not find this at a local flight school. You could, of course, train with the pros at Flight Safety International and SIMCOM. Its top-shelf training that will cost some real coin.

One respected training operation thats one of the few insurance-approved initial and recurrent centers is Century Air in Caldwell, N.J. What makes them unique is their on-site simulators appropriate for a wide variety of high-performance twins and singles. Theyll also train you in your own aircraft.

No matter how well-maintained a high-end aircraft might seem during the pre-buy process, there no doubt will be surprises surfacing during the first year of ownership. Some crop up in the first weeks of operating the aircraft. Were amazed at the cavalier attitude of some buyers when it comes to the maintenance thats required of complicated aircraft. While there are some exceptions, you can bet that operating a cabin-class twin will require more maintenance effort than oil changes.

For instance, consider the new owner of a clean Cessna 340 pressurized twin. His airplane was acquired through a respected broker and historically serviced by a maintenance facility versed in Cessna twins. He did everything right in the shopping and buying stage of ownership. He looked hard at maintenance records, stayed away from low-priced and high-time planes that were rough around the edges and took his time in the search. Still, as he was attempting to accomplish his training, the aircraft spent two months in the shop, costing $30,000 in unplanned maintenance. Then, once the warmer weather came around, he realized the finicky air conditioning system didnt work. Imagine roasting in a pressurized cabin on a 90-degree day without air conditioning. This is far from cabin-class comfort.

When it comes to certain complex singles and twins, one mechanic told us the mentality should be to “start at the nose, work back to the tail, then start back at the nose.” Many new owners of complex cabin-class airplanes come from more basic models that are simplistic to service and reliable to own. It can be shocking to learn this isnt the case with corporate-caliber aircraft-especially when the owner starts writing the maintenance checks.

Sister publication Aviation Consumer has a monthly Used Aircraft Guide covering model history, maintenance considerations, safety records and a host of other information on a given model. Its also prudent to join an owner group to get a better idea of real-world experiences when it comes to maintenance and overall reliability. Some owners become so strapped by maintenance and operating costs that they simply stop flying the airplane. This can be exactly the wrong response because letting engines sit for long periods of time can do more harm than good. For some, its tough letting go of a prized aircraft-or maybe in a soft economy they cant sell it-so the machine sits in a hangar (or worse, on a ramp out in the elements) for long periods of time. These are the used aircraft youll find at rock-bottom prices and they are usually begging to be serviced.

From an acquisition standpoint, its never been a better time to upgrade to a high-end aircraft. Prices are unheard of and in many cases, buyers can name what they want to spend. But thats where the value ends. An owner who stepped up to a G2 Cirrus SR22 accurately pointed out that once you do step up, you cant look back. You need to fully understand and accept the step-up airplane will be more challenging to fly, more costly to own and your mission profile will change.

Good, established shops certainly arent lowering their prices for quality maintenance, and we dont know of any manufacturers who are deeply discounting replacement parts. And youll still need to buy the fuel for thirsty engines, while skimping on training and maintenance is what disasters are made of. But if you match the aircraft to your mission, skills and budget, theres no reason why you cant handle that high-end aircraft you always wanted.