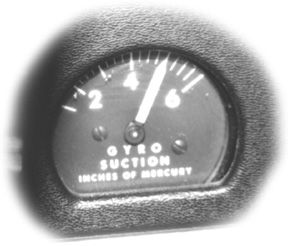 In all, those are important responsibilities for a fist-sized chunk of carbon fitted with carbon blades that ride in constant contact with the housing surrounding them.

Although dry vacuum pumps are criticized for their uncertain service life and tendency toward unpredictable catastrophic failures, the question of a healthy vacuum system is really more complex than that. Hoses, fittings, regulators, gauges, couplings, valves, filters and instruments all have to be added to the mix. And the wildcard is that even a repaired malfunction may leave a legacy of debris that will cause another failure in the system in short order.

Partial panel skills are an obligatory part of initial and recurrent instrument training, but the training is artificial at best. Having an instructor slap a cover over your gyros and declaring them failed is a long way from the often-insidious lean the instruments take on in an actual failure.

Better, then to avoid the problem in the first place by watching for the subtle clues that indicate impending vacuum system trouble. Even installing a backup system such as an electric vacuum pump or an alternate vacuum source tied to the intake manifold is an uncertain solution, because it addresses only the pump failure, not the loss of another part of the system.

Sometimes the failures are easy to spot, other times they are not.

Instrument Failures
When taxiing on one occasion for a departure into low ceilings and widespread IFR conditions, the panel of our Mooney emitted a noise described by a passenger as a piece of paper getting sucked through a fan. Within a minute the attitude indicator bobbed around randomly. The vacuum gauge was in the green and the directional gyro still worked, however, and it was readily apparent that the attitude indicator itself had failed – thankfully before takeoff.

Failure of the attitude indicator is usually indicated by either excessive drift or tumbling, but there are some indications that failure is on the horizon. As the engine starts, an air-driven attitude indicator will do a dance known as nutation. When the air begins moving through the gyro, it activates the erection vanes. It should wobble a bit as it stabilizes. If it doesnt, the vanes, gimbals or bushings could be sticky, which will prevent the instrument from working properly in flight.

Many times, these kinds of failures are a result of contamination of the incoming air. More on that in a moment.

Note that nutation will only happen if the gyro is at a dead stop. If the engine was running within the last 10 or 15 minutes, the gyro is sill spinning. It wont dance and will take longer to re-center.

In addition, watch the gyros during shut down. As the gyro spins down it should park itself into a tilted pitch/roll position. If your gyro begins to park in a different orientation, you may be looking at imminent instrument failure.

System Failures
Besides the gyros and the vacuum pump, even a simple version of the pneumatic system includes a filter, gauge, relief valve, hoses, fitting, vent line and possibly a warning light. Preventing problems and diagnosing them can take a bit of hunting.

A decrease in the indication on the suction gauge, for example, can mean the air filter is dirty. It can also mean the regulator is sticking, the pump is failing, a fitting is leaking, a line has collapsed or the gauge is malfunctioning. None of these problems are amenable to in-flight troubleshooting, which adds to the importance of a preflight operational check.

Many system failures are manifest in slow deterioration of the gyros performance. They may be slow to erect. The directional gyro may precess excessively. The readings may be sporadically incorrect.

Thats good news and bad news. The good news is that you can spot the problem before youre stuck on top of a solid overcast with no recourse other than partial panel. The bad news is that the deterioration can be slow enough that you dont recognize it until a minor maintenance issue has become a major operational concern.

Most of the problems associated with vacuum system failures arise in the air supply. When a vacuum pump fails, it throws chunks of the vanes into the gyro air. If the airplane has a pressure system, those chunks go downstream toward the instruments. But even in a vacuum system, the failure of the pump may result in contamination getting sucked backward into the lines because of the vacuum that exists there.

In addition, the filter that removes contamination from the incoming air – which runs through the gyros before going to the vac pump in a many systems – can become clogged. That forces the pump to work harder and puts pressure on the hoses that may increase their tendency to kink or collapse.

In both kinds of systems, a mechanic working behind the panel can inadvertently kink a hose. Old hoses can deteriorate and leak. They also have been known to throw debris off from their interior walls, making a real mess out of the system.

Maintenance and Prevention
Inspection and pre-emptive maintenance are the best ways to cope with the uncertainties of the vacuum system, because you can often head off trouble before it even starts. It takes an attitude and willingness to spend money, however, that many owners dont have.

Parker Hannifin, maker of Airborne vacuum pumps, has been particularly sensitive to the whole notion of pre-emptive replacement, due in part to liability concerns when the system fails and a crash results. For most models, the companys service information – which it considers mandatory but is not binding on Part 91 operations – calls for vacuum pump replacement at 500 hours time in service or six years from date of manufacture, whichever comes first. Some installations have replacement intervals of 400 or even 300 hours time in service.

Some Airborne pumps carry similarly mandatory inspection intervals of 50 hours or 100 hours, though most do not.

Clearly many pilots are loathe to follow these recommendations, reasoning that if somethings not broken, dont fix it. But regardless of whether the pump has reached the manufacturers interval, there are steps you can take to minimize trouble.

Perhaps most importantly, avoid contaminating the system. Dry pumps rely on the carbon vanes wearing to provide lubrication. Washing the airplane with a high-pressure sprayer can force cleaning solution into the systems exhaust port, which will wash away the dry lubricant or cause it to clump.

Oil leaks from the engine through the pump mount pad can also gum up the works. And never try to maintain the pump yourself by spraying some kind of lubricant into it.

If your pump fails, make sure the line is cleaned out before replacing the pump. If not, that new pump may be toast in 100-200 hours, further complicating your problem along the way. During installation, make sure anti-leak measures such as Teflon tape or Thread Lube are not part of the drill. The only authorized preparation for the fitting threads is a light silicone-based spray lube.

If your system is still working, but the vacuum or pressure gauge is reading a bit low, resist the urge to merely adjust the pressure regulator. First, troubleshoot the regulator and the system components and solve the problem that way.

Vacuum pumps are designed to operate at a given air volume under a relatively light pressure load. Increasing the load on the pump only increases the odds of the thing self-destructing.

Finally, if the pump does fail, most experts suggest you avoid overhauling it. While the overhaul kits contain new vanes and rotors, other parts that are susceptible to wear may be neglected, which may lead to premature failure of the overhauled device.

For example, the drive shaft that connects to the engine is isolated from the vane by a frangible coupling. That way, if a vane fails and jams the rotor – the typical catastrophic failure mode in a dry vac pump – the drive shaft continues to turn without damaging the engine.

If the vacuum system fails in a more subtle way, however, and the vacuum pump is subject to excessive loads, the drive shaft can twist, rendering a repair of the vanes and rotor moot.

A healthy vacuum system is within reach of virtually every pilot and owner. Although some cope with the potential for failure by installing backup pumps or electric backup gyros, a bit of care in the airplanes operation will help keep those backups in reserve, instead of on the front lines.

Also With This Article
Click here to view “Maintenance Tips.”