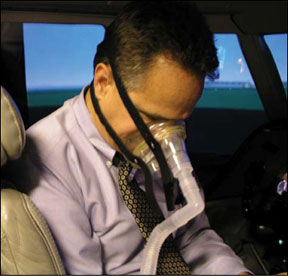 In that vast wasteland we call television, a clever commercial has been making the rounds lately. It depicts a hapless sad sack in a crumpled white suit bumbling through a nighttime cityscape setting off fires, floods and other assorted mayhem. The catchline is “risk never sleeps.”

It sure enough doesnt, but the other essential element of accidents is opportunity. Consider this: In two years time, Cirrus Design will have sold more than 1000 turbocharged SR22s, each capable of effortless cruise in the mid-20s.

The risk, of course, is hypoxia, and 1000 airplanes is enough opportunity to give an insurance executive ulcers.

Is the industry really addressing this? Not really, unless you consider the lukewarm, half-hearted and belated hypoxia training most of us might get as effective education. We recommend altitude chamber rides, and were all atwitter over inexpensive pulse oximeters which many owners use as though they dont mind that vague feeling of being not just a pilot, but an ICU patient.

There may be a better way in the form of so-called hypoxia awareness training, which differs from the traditional chamber ride in that its conducted at sea-level pressure with a reduced oxygen breathing apparatus that mimics the lower oxygen partial pressure of high altitude. The concept is this: The reduced breathing method brings on hypoxia slowly enough for the trainee to make note of the first onset hypoxic symptoms. The trained-in response is supposed to be an emergency descent and immediate supplemental oxygen, if its not already in use.

But does it work better than a chamber ride? Id say yes, if youre paying attention, but one training session probably isnt adequate-you need to not just recognize symptoms but rewire your brain to recognize something else: denial. And thats not easy. Heres why.

In early 2006, I was invited to attend a world-record skydiving event in Thailand which entailed multiple jumps from five-ship formations of C-130s from altitudes as high as 25,000 feet.

The oxygen system for these jumps was based on the blunt force method: A cascade of industrial-size cylinders at the front of the airplane that flowed oxygen through plastic tubes routed along the cargo bay walls. It flowed gales of the stuff-up to eight liters per minute-through plastic tubes we shoved into closed full-face helmets. Other than being instructed to keep the helmets shield closed, we were given no oxygen training.

By sheer happenstance, for a report that appeared in

Aviation Consumer magazine the month before the Thailand event, I had gone through FlightSafety Internationals (FSI) reduced breathing hypoxia training. I was all over being able to recognize early-onset symptoms, and it paid off sooner rather than later.

On the second jump, when we stood up at 22,000 feet to set up an 80-person mass exit-yes, very carefully-I felt the facial flushing and lightheadedness that I knew were my first onset hypoxic symptoms. I knew I wasnt dysfunctional, but I also understood I soon could be.

I pushed the gushing O2 hose nearer my nose and forced a couple of “sighing” breaths, which cleared my head. Cheers for the training. It had obviously worked.

But that wasnt the case for everyone. On a subsequent jump, a Russian skydiver in front of me picked up a hose whose quick disconnect fitting was loose and leaking. Untrained in testing flow-hold the hose against your cheek, lips or an eye-and not cognizant of hypoxic symptoms, he collapsed on the cargo deck in front of me, a development that caused an expensive abort of a five-ship formation and gave him a ringing headache.

Although hypoxia didnt run rampant for this event, there were a handful of serious incidents involving loss of consciousness, confirming what all of us know: In the 20s and higher, hypoxia is not to be trifled with. Pilots who think they can handle feeling like crap are delusional. Crossing the line from noticeable symptoms to loss of useful consciousness can occur shockingly fast above 20,000 feet and perhaps too quickly for you to do anything about it.

Fast forward 18 months. I was flying with a Columbia 400 owner checking some speed and fuel flow data at 23,000 feet for an aircraft comparison article. I was using a mask plumbed through an oxygen conserver and had a dedicated Nonin pulse oximeter. We climbed through a series of altitudes and level-offs, confirming the 400s performance against the POH. I hadnt given a second thought to hypoxia.

Occupied with pulling data out of the Garmin G1000 at 23,000 feet, I was oblivious to my first onset symptoms and drifted into that state of hypoxic stupidity that I suspect has killed more than a few pilots, including the much written about crew of golfer Payne Stewarts ill-fated Learjet in 1999. In that accident, a closed inflow pressurization valve and a faulty emergency supplemental oxygen system conspired to deprive the pilots and passenger of a habitable cabin. Whether the pilots could have saved the day if theyd had hypoxia awareness training is conjecture, but who can argue theres such a thing as too much training or knowledge?

In my case, I had simply fallen into the classic distraction/denial trap. Eric Dixon, who oversees FlightSafetys hypoxia awareness program, told me pilots are task oriented to begin with and may become more so in the midst of a hypoxic event. As a pilot realizes he or she is suffering degraded performance, the tendency is to complete the current task before acknowledging and acting upon the hypoxia. Dixon says pilots will typically want to set a frequency or solve a navigation problem before dealing with acknowledged hypoxia.

And thats exactly what I had done, despite having had Dixons carefully considered training. I wanted one more set of airspeed, fuel and wind data, then Id see why this oxygen system wasnt doing the job. At that point, the oximeter indicated my SpO2 was in the low 70s.

I wanted my data, so I gutted it out for at least two more minutes, to the point of noticeably narrowed vision and gaspiness, which I can only surmise is not far from loss of consciousness. I was as deep into hypoxia as I have ever been, including in the chamber and in training sessions. I had just enough left to figure out that mouth breathing would illuminate the green pulse light on the conserver and pull the oxygen bolus I desperately needed.

This is exactly the wrong approach to an evolving hypoxic event, and what FSI and Air Care Solutions (see source box) training is supposed to prevent. The proper response is a decisive descent to habitable air and/or emergency oxygen, if its available.

In GA oxygen systems, emergency oxygen usually isnt available-if the O2 fails, it fails. The point is, dont waste time working the airplane problem, but get heart, lungs and head to a lower altitude before you run out of time to do either.

Even though the training didnt stick for the second time around, I still think its worth the effort and preferable to a chamber ride. For pilots who fly frequently at high altitude, yearly recurrent training may reinforce the notion to act decisively while dissolving-once and for all, one hopes-the wrongheaded instinct to tough it out and try to fix the problem or to mistakenly assume the symptoms really arent that bad.

Permit one more observation: For those flying at high altitude regularly and using oxygen conservers, I suggest some skepticism about flow requirements. Im not convinced the electronic conserver we were using-a Mountain High unit-was sufficient for the altitude without working at it. To release its oxygen pulse, the conserver needed a deepish mouth inhale and I was used to shallow nose breathing through cannulas. In my view, any basic life support system that requires forethought to work correctly has, by definition, human factors compromise. Well examine that in a future issue. For now, be forearmed.