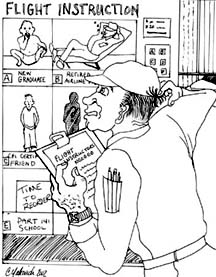 During the recently concluded Winter Olympic Games, the picture of young skaters nodding solemnly at the last-minute instructions of their wizened coaches painted an idealistic picture: Been there, done that. And now Im going to help you do it, too.

The picture at the local FBO is usually different. Fresh-faced instructors pace eagerly near the door, waiting for students who usually turn out to be men and women on the other side of 30. Or 40. Or beyond.

In a field that pays lip service to safety at nearly every turn, it strikes some as odd that some of the least experienced pilots are the ones who teach neophytes. Those who sing the praises of experience wonder where they can find a grizzled 25,000-hour instructor who has seen it all and lived through it. Theyre not interested, they say, in that 250-hour fresh flight school graduate who is barely shaving but whose eyes still gleam at the prospect of touch and goes and who is firmly rooted in the operating systems of modern avionics.

Right off the bat, its clear that picking a flight instructor has nothing to do with age, though many pretend it does. It has to do with fulfillment and money, though not necessarily in that order.

Flight instructors working for FBOs and flight schools operating under Part 91 are generally a low-paid, high-turnover bunch, as historically they use the hours accumulated bouncing around the pattern in beat-up Cessnas as a stepping stone to an airline career. The economics dont work in their favor while theyre instructing.

A typical flight school charging pilots $35 an hour for instruction pays the instructor only about a third of that. The rest goes to overhead, benefits (if any), and the other costs of doing business and (possibly) supplying the FBO with a profit. Note the airplanes insurance and other operating costs are paid out of the hourly rate for the airplane. Because the FBO takes a cut off the top on a leaseback airplane, the instructor may cost a few dollars more if you bring your own airplane.

Therefore, the pilot hiring a flight instructor for a BFR squawks about paying $35 an hour for the expertise of some kid, the FBO is barely making ends meet at that price and the instructor is caught in the middle working a job that pays just enough to be poor.

Its no wonder, then, that only a small percentage of people with CFI certificates consider flight instruction to be a career. Its either a stepping-stone, in the case of time builders looking eventually for the big bucks of an airline captaincy, or a hobby, in the case of the semi-retired or part-time instructor who already has a real job.

As a stepping-stone, it is the home of young future professionals, short on experience and long on enthusiasm. Because 250-hour instructors are not uncommon, some say aviation has become an industry where the blind lead the blind.

Identifying the Weaknesses
Even the FAA has acknowledged the problem. As the depth of experience within the flight instructor community continues to decrease, significant concern regarding the quality of flight instruction has continued to increase, reads the summary of an innovative flight instructor safety program put into place by the Orlando Flight Standards District Office.

These declines came in the face of a 20 percent increase in the number of flight training hours during the period. After two years, flight-training accidents accounted for 16 percent of the regions accidents, down from 24 percent in 1998.

In addition to the lower accident rate, the FSDO also reports the pass rate among CFI applicants is up, going from 53 percent to 63 percent.

Does this mean the quality of instruction has improved? Well, yes and no. Some of the reported successes fall into the category of bureaucratic solutions – fewer airplanes showing up for CFI checkrides with paperwork issues, for example. But others, as the accident rate clearly shows, are successful by any measure.

Key among the components of the FSDOs so-called Flight Instructor Special Emphasis program is a series of seminars geared at teaching instructors how to teach. And herein lies a key part of where the age/experience argument breaks down.

While its true that many 20-something CFIs are simply building time running around the traffic pattern with primary students until they get a break with an airline, its also true that some have a zest for flying that translates into passionate instruction.

The question becomes: how much experience is enough to start teaching? Surely this varies with the person, but as a general rule a smart instructor who is not part of a rigid Part 141 curriculum should start with the easy stuff – BFRs, retractable/high performance transitions – before starting a student from zero time. That gives the instructor time to learn to teach, which is an important distinction from knowing how to fly.

The regs acknowledge the need for a CFI to know how to teach, but the requirements, critics say, are too general to ensure that goal is achieved.

Professor Pilot
Many pilots are vocal about what they think is missing. They long for a cadre of professional instructors – professors instead of teachers aides – who embody skillful teaching and a decade or more of experience.

And so money enters the equation. Instructors are paid what amounts to a modest wage by almost any standard in the industrialized world. Those who have the goal of moving up, however, get other compensation. Because they can log instructional hours in furthering their careers, those hours have a real value.

A thousand hours of instruction making $10 an hour nets only $10,000 in wages, but it also nets hours in the logbook that would cost $60,000 or more if they had to buy the experience. Any view of the compensation paid to time-building instructors has to take this into account.

On the other hand, the professional instructor isnt necessarily focused on the hours logged, so the relative value of those hours is less, making the wage appear even paltrier by comparison.

For a person in this situation, the hourly rate and the satisfaction of teaching are the only motivations that will keep them in the game over the long haul. They are generally resigned to the fact that teaching wont make them rich, but they would like to live on what they make.

The financial realities force many would-be professional instructors into the role of part-time instructors. They keep a full-time job for the benefits and security, and teach on the side as a second job. Consider the sacrifices this person makes.

Lets say this part time instructor is an independent, charging the $35 market rate also charged by the FBO. From that they must pay liability insurance. Because they are paid only for instructional time, they are not compensated for time preparing lessons, doing paperwork, driving to the airport only to find the weather poor or the airplane broken or the student a no-show.

Instructors who fall into this role often report actually pocketing $5 to $8 per hour worked – hardly the way a professional would like to be treated.

Solutions
Like many of the problems people face in aviation, the instructor dilemma is one that defies easy answers. The bottom line is that instructors should teach students how to fly and pilots how to survive. That means stick and rudder skills, sure, but also sound decision-making, risk management and threat analysis.

Perhaps the biggest problem an individual pilot makes is in assuming that one person can teach him or her all of those skills.

Throwing money at the problem – as in paying $50 an hour instead of $35 – doesnt necessarily gain you anything unless the extra money buys access to expertise you cant buy otherwise. Want to learn how to land a 172 on a calm day? Any entry-level CFI can show you. Thatll be $35, thank you very much. Want to learn to fly formation in that vintage warbird jet you just bought? Think again about the price.

Flying safely involves a myriad of skills. Chief among them is the ability to make good judgments. But most pilots abdicate that responsibility when it comes to finding an instructor.

They accept the offer of the first instructor who greets them when they walk in the FBOs door. They ask the stick-and-rudder bush pilot to check them out in the new rental twin.

On top of that, they expect to be a sponge, passively soaking up the knowledge and wisdom the instructor is imparting to them rather than reaching out hungrily for the new capabilities.

The flight instruction dance is one where the pilot must lead, not follow. Yet many pick the easy BFR or the pencil-whipped ICC.

Pilots must learn to choose a flight instructor the same way they pick an auto mechanic or dentist or family doctor – without regard to cost but rather with an eye on capabilities, specialties and personal fit.

To expect one instructor to fit all those needs is unrealistic, and that leads the pilot to express dissatisfaction with a process theyve opted out of participating in.

Personal responsibility is an easy thing to call for, but a harder thing to accept. Before pilots can complain about the poor state of flight instruction, they have to ask themselves what theyre doing about it themselves.