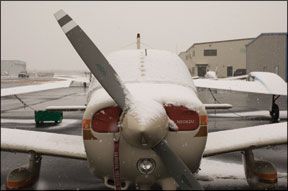 Its been several years now since I inflicted this on the poor thing, but somewhere out there is a Piper Archer II it once took me and a friend several tries to get started one cold, wintry day outside Washington, D.C. A lineguy came by, aimed a torpedo heater into the engine cooling inlets for a couple of minutes apiece, charged us a bunch of money and left. After a few more tries, wed managed to frost the plugs, so we decamped to the FBO for hot coffee. Thirty or so minutes later, we tried again and finally got a start. Based on what I know

now-I knew very little about engine or aircraft pre-heating back then-none of what we did could have been good for that engine.

Later, when I had my airplanes powerplant replaced, I had the shop install a heating kit consisting of bands around each cylinder base and a pad glued to the oil pan to heat its contents. Afterward, when I knew I had an upcoming flight, I would drive out to the hangar, plug in the system to a drop cord, install cowling plugs and wrap the whole thing in a cheap blanket. Checking the engine monitor the next morning before starting, I routinely found cylinder and oil temps of at least room temperature, and often much higher. It would easily be freezing or colder inside the hangar. I like that.

In many FBO lounges, debate rages regarding how and whether to pre-heat an engine and/or the rest of the plane. As usual in aviation, the correct answer to the question is “It depends.” It depends on how cold the engine/airplane is, and it depends on how you heat it.

The “why” of pre-heating is fairly easy to answer. At sub-freezing temperatures, oil thickens, precluding it from flowing easily and quickly to engine parts needing lubrication. To me, this is a no-brainer and is easily the best answer to why an engine should be pre-heated. Also involved in this equation is the different rates at which the various metals in our engines expand and contract with temperature. These differing coefficients of expansion mean aluminium and steel can be closer together than the engine manufacturer specifies during a cold start. That cant be good for the engine.

How cold is cold enough to pre-heat? Opinions-like pilots-vary. Lycoming recommends pre-heating if the engine is cold-soaked to 45 deg., F or lower. Continental, meanwhile, says to pre-heat if the engine has been at 20 deg. F or colder for two hours or more. What about 46 deg., or only 0145? You be the judge, and think about which is the safer, more reasonable course of action.

Although aluminum and composite structures tend to strengthen as temperatures drop, cold has the same basic effect on the moving parts in our instruments as it does the engine. Just as it isnt good for the engine to start rotating at low temperatures, the same is true for mechanical gyros, for instance. Also, some radios dont work well in cold weather, either-the digital displays in some King nav/coms come easily to mind-and their other components can take longer to come up to operating temperature. Older, analog transponders are notorious for taking a while to warm up.

For these reasons, the ideal here would be to heat the entire airplane, not just the engine.

How to go about pre-heating is another question. When my buddy and I coaxed the lineguy out to blast our Archers engine for a few minutes, its unlikely we did much good. See, it took the engine a while to get to its cold ambient temperature; short of something thermonuclear, its going to take a while to heat that big hunk of metal to the point abnormal wear wont occur and the oil flows freely. Aiming a blast furnace into the engine compartment for a time period measured in single digits wont cut it, and quite possibly could damage rubber and plastic items in there.

Ideally, the plane would be stored in a heated hangar until we get in. Then, the same lineguy who blasted that Archer would hitch up to it, tow us out to the ramp and wed start the engine. Good luck getting that kind of service, although a heated hangar is relatively easy-but expensive-to find. The beauty of a heated hangar is everything gets to the same temperature: engine, airframe, instruments and radios.

Between the two extremes of doing nothing and paying for a heated hangar are several options. My favorite is the aftermarket system of an oil pan heater and heated bands around the cylinder bases, mentioned earlier. This system has the benefit of being installed on the engine-it goes everywhere the airplane goes-its lightweight and simple to use. The only drawback is the need to plug it into household current, which can require a rather long extension cord, depending on where youre parked.

An inexpensive alternative is to place one or two trouble lights in the engine compartment for at least overnight. The heat energy given off by the lights works the same way as the oil pan heater/cylinder bands product, without the expense and installation hassles. In both cases, youll want to seal off the engine compartment from ambient air and, preferably, wrap a blanket around it all to help retain heat.

Does forced, hot air-like that generated by the aforementioned lineguys torpedo heater-do the job? Absolutely, and it can work much more quickly than the overnight or long-term options. But the key isnt quickly throwing a bunch of BTUs at the engine; instead its a longer term application of heated, forced air. The idea here is applying sufficient heat over a long-enough time to warm the internal engine components, not just the cylinders. Numerous forced-air products are available from the usual suspects to accomplish this task.

Thats fine for the engine; what about the cabin? While much of the pre-heating emphasis rightly is on the engine, we also should think about the instrument panel. This is where some ingenuity comes in handy, along with a small electric heater. Some discretion is advised, of course, because there can be a lot of flammable materials in the average cockpit and placing a heat source near them isnt always a good idea. Consider a tip-proof ceramic heater featuring automatic shut-off as a minimum requirement. Also, keep it on a low setting; youre trying to warm the cabin a bit, not create a sauna.

All of these pre-heating products are great and all, but they can get very pricey very quickly. In the current economy, of course, it seems everyones on a budget. How can the average aircraft owner pre-heat his or her average aircraft without running up a huge tab on the credit card? There are ways.

The first thing to consider is whether youre on a tiedown or hangared. Parked outside during the winter, your options may be limited, but they do exist. The first thing to ask is how far away from the tiedown is an electrical outlet. If you can reliably and safely run a drop cord out the airplane, and plug in a trouble light under the cowling, youre in business. If not, youll need to make some arrangements to relocate the airplane closer to an outlet when you know youll be flying. Talk to your friendly local FBO about timing and procedures; you might be surprised how accommodating they can be.

If getting electricity to your airplane is out of the question, one alternative is using a portable propane bottle as an energy source and a low-end utility heater, along with some clothes-dryer ducting and a cheap blanket. Weve seen solutions like this run around $100, total, from a home supply store. Again, one of the keys here is slow, steady application of heat over a period of time, not just blasting a bunch of hot air onto the cylinders and hoping for the best.

Winter flying offers many rewarding aspects. For one, the air is denser, so aircraft perform better than in the summer. Using the airplane to get to warmer climes, if only for a few days, is one of my favorites things about it all. But we need to consider the effects of cold weather on the aircraft and plan accordingly. Pre-heating is part of this equation and, to a great extent, it doesnt matter how you go about it. It does matter, however, that you plan for winters effects and recognize the airplanes special needs this time of year.