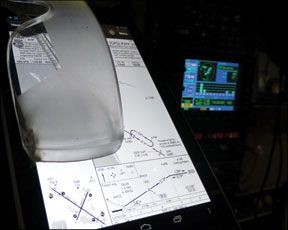 Maintaining your IFR currency isn’t that hard. Just fly and log in actual or simulated conditions six instrument approaches, “holding procedures and tasks” and “intercepting and tracking” electronic courses within the preceding six months, and you’re golden. Even if you find yourself slightly out of currency in the 11th month, you can go out with a safety pilot and fly the requisite approaches/holds/intercepts, regaining your ability to legally file and fly IFR.

Step One
As with a 12-step program, the first thing you should do is admit you have a problem. Getting back into the IFR saddle isn’t the end of the world, but it’s not as easy as it once was, either. To do this right, you’ll need to spend some time studying and you might even need some practice before going for the actual IPC. Then you’ll need to seek out an instrument instructor who’s willing to give you the IPC.

Depending on your situation—how many of your buddies have their double-I and whether the willing instructor knows you and how you fly, for example—you might get off easy. The other extreme? If you rent and the FBO looks at IPCs as a profit center, good luck. As the FAA’s Instrument Proficiency Check Guidance handbook (IPC Guide) states, “an IPC more often requires short-term evaluation of an unknown pilot, possibly with the added challenge of an unfamiliar aircraft and/or avionics.”

As always when someone is gearing up for a new rating, a flight review or even a simple endorsement, we’d encourage trying to make it as much of a learning experience as possible. For the IPC, that might mean getting a high-performance or complex endorsement at the same time, or maybe working in a flight review sign-off (which should be a no-brainer). That said, we wouldn’t advise doing your IPC in something equipped with a Garmin G1000 panel if all you’ve flown before are steam gauges.

Guidance
While some of the foregoing might not brighten your day, here’s something that could: The aforementioned IPC Guide is a comprehensive overview of the IPC and everything you need to know, laid out in a logical fashion. We’d encourage anyone who needs or may need an IPC to download a copy in the PDF format from the FAA’s Web site: tinyurl.com/avsafe-ipc. While you’re at it, you also should grab a copy of the instrument rating’s practical test standards (PTS), also in PDF: tinyurl.com/avsafe-ifrpts.

The sidebar above lists some of the publications you may want to review before going for your IPC. Additional guidance is available on the FAA’s FAASTeam Web site, www.faasafety.gov, including both commercial and FAA-sponsored courses designed just for you: the pilot who needs an IPC. At least the one course we previewed for this article isn’t an in-depth review. It does, however, hit the high spots and will help you recall some of the basic numbers and rules applicable to instrument flying.

A final word of advice before tackling some other topics: Don’t show up for your IPC without current charts. Nothing screams “unprepared” like pulling out a book of terminal procedures that expired before the last time you were current. Be sure you’re carrying current approach plates and en route charts for the area in which you’re flying and at least some kind of separate reference listing airport data, like is found in the FAA’s Airport/Facility Directory, the green books. If you’re using an electronic tablet like an iPad for your charting, be sure your EFB software is up-to-date and the application has current chart data. It also would be helpful if you actually knew how to use the application and had some method of mounting the thing where you can refer to it easily while flying an approach. It’s considered really bad form if you have to ask the double-I to hold your iPad while verifying the inbound course or minimum altitude you’re supposed to be flying.

The Plan
You’ll likely be asked to plan a flight to some destination and obtain a standard weather briefing, file a flight plan and assess whether the airplane’s equipment and status—like its fuel load—will be sufficient. Regardless of whether one is required on that day’s weather, you also should plan for at least two alternate airports.

Why two? One of the compleat instrument pilot’s dirty little secrets is the alternate airport filed on the flight plan probably isn’t the alternate he’ll use in a pinch. For one thing, it’s unusual—not unheard of, but unusual—for the original destination to go so far down the tubes we can’t get in. The legal alternate is just that: The one we can actually reach after flying to our destination and failing to get in, given the fuel available and distances involved.

Your “real” alternate easily could be some other facility, one sitting astride your flight-planned route, for example, or the smaller facility that’s downwind from your filed alternate. If you’ve got the gas, your alternate could even be your departure point. And unless you’re confronting some really scuzzy and fast-moving weather not complying with your briefing, there’s usually plenty of warning conditions are low enough you’re not going to be able to land at your destination. But only a sadistic double-I with a death wish would launch on an IPC in that kind of weather, right?

Things to Think About
Ideally, you and your double-I will have discussed how he intends to conduct the IPC before you show up for it. This could include such details as the destination for which he or she expects you to plan a flight, the aircraft’s equipment and how you’re expected to use it. Given the FAA’s recent and long-overdue emphases on risk management, you also should expect some qualitative assessment of how you view and respond to weather and equipment-failure scenarios.

For example, what are your responsibilities if you’ve filed with a /G or /R equipment suffix and your panel-mounted GPS soils the bed as you level off at cruise? We won’t spoil it for you: The answer is in the FARs. What about an autopilot failure? You don’t need it legally, but its loss could definitely add to your fatigue over a four-hour flight. How about the #2 nav/comm? If it packs up, what capabilities go with it? What are your legal obligations, if any? Another thing you might expect to be asked is to explain the delay between a Nexrad image being captured, processed, transmitted and appearing on your in-cockpit display. It’s called latency, and might be as much as 20 minutes. A thunderstorm can move several miles in that time, and we’ve witnessed them blossom from yellow to colors we’ve never seen before in less.

Flying The Plane
Up to now, we haven’t even touched on the key thing on which you’re going to be evaluated: Flying solely by reference to instruments. If it’s been a couple of years since you were IFR current, you likely need some practice before showing up for your IPC. There are a number of ways to skin this cat: One of the simplest might be to get some instrument dual with the double-I with whom you plan to do the IPC. That way, at least you can polish up on the stuff he or she considers important. One of the least-expensive and most-rewarding might be to get some time in an approved simulator or flight training device. In our experience, they’re much harder to fly well than the actual airplane, and you’re likely to learn a few things along the way to perfect your scan and refresh your procedures.

Failing that, get a safety pilot and go roll your own. Use the Instrument Flying Handbook as a refresher on attitude instrument flying, then fly the maneuvers it recommends. That should be a session all its own. Then find a quiet nearby facility with some basic approaches and shoot them until you can’t stand it anymore. For a third session, pop over to Hill Valley Regional and mix it up with some traffic while shooting more approaches. Use all the equipment available in the airplane you plan to use for the IPC: ILS, VNAV, VOR/DME, etc., when practicing.

By this time, you’ve probably figured out that maintaining your IFR currency once you regain it will be easier than getting an IPC every year or so. Work with your double-I to schedule some post-IPC instrument flying so you won’t find yourself in this bind again.