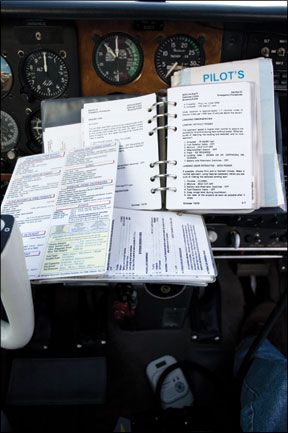 A wise old pilot once told me here are three distinct types of flying: simulator flying, checkride flying and typical everyday line flying. Although the context of this nugget was originally air carrier operations, there seems to be an innate understanding of this concept among all pilots. When administering flight reviews to experienced owner-pilots, I often get to see them on their “best behavior.” Of course, flight reviews arent checkrides, but many pilots view them as such, especially if its been a while since their last “real” pass/fail

flight. While somewhat flattering to me, its usually obvious which aspects of their behavior are part of their normal operation and which are a show put on for my benefit. Often, Ill see them whip out a ratty old checklist, dust it off and try to use it sequentially as a do-list. Almost comically, the effort comes across almost as awkward as a middle school dance: The desire is there, but they just dont seem to know what to do with it.

There seems to be a widespread misunderstanding about the use of checklists among students, instructors and certificated pilots. The common belief is that for a checklist to be used properly, it must be physically read and accomplished item-by-item, and that any deviation from this would equate to a cardinal sin on a flight test or flight review. Such a belief is misguided and potentially hazardous. After all, why did we invent the GUMPS check, or CIGAR? Arent they checklists of a sort, too? Instead-and depending on the type of flying you do-heres why it might be better to put your checklist in the glovebox and go with the flow.

Surely this must sound like heresy, but lets think a little before breaking out the pitchforks. Students are traditionally taught the read-do method and to use the manufacturers checklist as a do-list, or an ordered list to be read and accomplished. Using the checklist in this manner frequently leads to distraction and unnecessarily increased workload. It requires the pilot to hold the checklist with one hand, reading the item to be accomplished with one eye, flying the plane with the other hand and the other eye, and adjusting the aircraft configuration with a third hand. Oh, wait; that wont work very well, will it?

Alternatively, the do-verify method of checklist usage is standard operating procedure for both single-pilot and dual-crew air carriers. Although the end result with both methods of checklist usage is the same, the do-verify method uses what the pilot already knows to configure the aircraft by using a flow, which is then verified by reviewing a written checklist on a workload-permitting basis. Using flows turns completing the checklist into a more relaxed (and perhaps, more accurate) process.

There are two key points in that last paragraph that need to be highlighted. First, the pilot only needs to consult the written checklist to verify the correct configuration was accomplished. This provides a level of redundancy, but also requires a minimal amount of “head-down” time. Second, the review is accomplished on a workload-permitting basis, meaning that it is allowable for a short period of time to elapse between the flow check and the checklist review, emphasizing the concept of “fly the plane first.”

Flows take into account the physical layout of the cockpit, to guide your hands during reconfiguration. When youre by yourself, you have to keep track of the whole thing. Likewise, in a dual-crew corporate aircraft or airliner, the captain and first officer each have their own flows of items on their respective sides and backed up by the checklist read by the non-flying pilot. Although the do-verify method requires some time to develop and memorize logical flows for your cockpit, when put into practice and combined with the use of profiles, it is one sign marking a true professional pilot.

One initial hurdle converts to the do-verify methodology must get past is developing their flows and refining their checklists. The checklists aircraft manufacturers publish seem to be written by a combination of engineers and lawyers, but certainly not by pilots. These checklists are often excessively verbose-not to mention redundant, especially when followed religiously-with illogical ordering. Some aircraft and some manufacturers are better than others in this regard, but if this sounds disturbingly familiar to you, take a look at the sidebar on page 6.

Unfortunately, unless you have an air carrier flight department handing them down from above, there isnt much guidance for developing your own flows. For most owner-pilots, its simply an organic process of trial and error, taking into account your panel layout and what youre trying to accomplish, using the items in the printed checklist as a guide. The goal is a logical and continuous sequence of items to configure for each phase of flight, so try to avoid skipping from one place to another. It helps to be looking at a picture of your panel when developing your flows.

While you may have the most comprehensive and intuitive flow ever made for your airplane, keep in mind that the checklist is not considered complete until the configuration changes have been verified through a review of the printed checklist. Therefore, a memory guided flow by itself (without verifying it with the checklist) is unacceptable for safe flight operations, and would guarantee you a pinkslip on a real checkride.

Occasionally an owner-pilot will argue that the cockpit is their checklist because their flows cover it in its entirety. However, I respectfully disagree. I dont know of a single pilot who is immune to an occasional mental misfire, so it sure cant hurt to double check. In a crewed environment, theres a second set of eyes, but in the single-pilot environment in which most of us fly, its all on us.

Two exceptions exist when considering how to execute checklists: abnormal and emergency procedures, which sometimes get jumbled together into a kind of nebulous “other stuff” category. As a refresher, abnormal procedures are for when something atypical, but not time critical, occurs (e.g., landing gear fails to extend). Emergency procedures are reserved for when time is of the essence (e.g., something is on fire).

By definition, situations requiring abnormal procedures rarely occur, otherwise they wouldnt be abnormal, would they? To minimize the chances of pilot error during these procedures, they should not be performed as a flow. Instead, abnormal procedures should be conducted using a read-do methodology with the appropriate checklists. Just take a deep breath and read the list, completing the items sequentially.

Although using the time-consuming read-do methodology to complete an abnormal checklist seems to violate our maxim that using a flow maximizes our opportunity to fly the airplane, an abnormal checklist is something you need to get right the first time. Often, when something unexpected happens in the cockpit, pilots react impulsively. In these situations, youre still flying, so just take the time to “wind your watch” and calmly pick up your abnormal checklist and reserve your flows for normal, everyday checklist items.

Emergency procedures should be completed through a combination of do-verify and read-do, as pilots of big twins will tell you. The checklists for such aircraft have a subset of the items contained in a box, denoting them as memory items. These are the killer items (e.g., putting out fires, ventilating the cabin, etc.) to be performed as a flow when the need arises. Once the excitement is over, the remainder of the checklist should be completed in a read-do manner.

The checklists for many lighter aircraft dont typically separate abnormal procedures from emergency procedures, although its not difficult to figure out which are time-critical and which are not. Additionally, for such aircraft the actual emergency procedures dont specify memory items, however the checklists are usually short enough for the entire thing to be considered as memory items. Regardless, when the engine is on fire, I guarantee you that the first thing you should be doing is not reaching for a checklist.

It turns out that the Practical Test Standards give explicit approval for the use of do-verify checklists. The introduction reads, “The situation may be such that the use of the checklist…would be either unsafe or impractical, especially in a single-pilot operation. In this case, a review of the checklist after the elements have been accomplished, would be appropriate. Division of attention and proper visual scanning should be considered when using a checklist.”

There is a great deal of ongoing aviation human factors research, of which checklist methodology is a significant part. It is encouraging to note that the FAA is incorporating the results by evolving its training guidance to reflect the latest developments. Ironically, the resistance to evolution is most often found with the individual instructors or flight schools.

Who hasnt come across a flight school Skyhawk or Cherokee with a ridiculously long checklist and a crew of instructors expecting it to be completed sequentially? This frequent combination has a detrimental effect on safety through unnecessary distraction, as well as the tendency to disregard the checklist entirely once out of the watchful gaze of the instructors.

So when Im administering a flight review and I see a pilot fumbling with a checklist, its certainly not a deal-breaker because it shows me the pilot knows deep down what “should” be done. More often than not the pilot knows the aircrafts cockpit well enough to have already developed flows, yet feels dirty for not following the checklist the way it was done as a student.

Instead, we can just talk about how to integrate the flows with their checklist and clear up some misconceptions at the same time. Remember, checklists are there to promote safety, not to serve as an end in themselves.