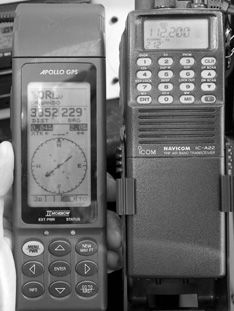 Another routine weekend trip for just what general aviation intended: a 650 nm weekend trip for a family event. I had a new toy in the panel after updating it with a multifunction display. It was a pretty simple installation, really, as the IFR GPS had been in place for four years, behaving flawlessly. Id been on a four-hour VFR round trip and the new installation was behaving properly. After a short day of work, this trip would be a piece of cake.

Well, this was during the six weeks of autumn in which the mid south was continually enveloped in the overcast surrounding a low-pressure center. Surface temps were above freezing, but the deck was at 2,000 to 3,000 agl the entire way; tops to 20,000 with ice in the tops. This was to be in the clag the entire trip. The flight plan suggested a trip duration of four hours, so the six hours fuel on board was ample.

Shortly after entering the cloud deck, southeast of St. Louis at 12,000 feet, the GPS went offline. Rebooting didnt work. A moment later the MX20 went belly up. Then there was the funny smell and the avionics breaker popped, taking with it, of course, the communications. Hmm. I really didnt like that smell. Master OFF.

It was 7:00 p.m. in the clag, dark ship, aluminum flashlight in my mouth, sorting stuff out. Ever the calm captain, I issued my first order: Girls, would you find the gray plastic case in the way back. Its got the portable GPS in it?

No response, of course, because the intercom was down. Off with the headset and I was hollering, Girls! …

The next five minutes were very, very busy. With no electrics, there are no servos to control the aircraft. The turn coordinator was behaving funny. Oh yeah, its supposed to. Find the soap dish cover and cover that puppy up. The handheld GPS was booting by this time.

I kept my scan going. No pitot heat and the outside temperature was 33 degrees F. I had no way to operate the pitot heat or boots if I needed to. I fumbled between my knees for my flight bag. Out came the handheld comm., but the Radio Shack rubber ducky remote is somewhere in a seatback pocket.

Once again, I was hollering. Girls, take a flashlight and … Oh nuts. I had to find another flashlight and hand it to my 14-year-old daughter. She didnt have one. Then I described the item. I had to fly the aircraft, too. I was two miles left of the GPS course. Level the wings, I told myself. It was cold because the Janitrol heater had gone offline.

Finally, the handheld was connected to an antenna on the windscreen and I called. Kansas City Center, Seneca declaring emergency, a total electrical failure, am a primary target on an IFR flight plan about 30 E of Cape Giradeau at 12,000.

Duh. I could hardly squawk anything without electricity.

I assessed my options. It was pretty urgent, but not yet dire. I had control, navigation, a big workload, and almost radio. At this point I decided to try to diagnose the situation.

Now imagine this, it truly happened: Hand-flying in IMC at night with only a flashlight, navigating by a handheld GPS, I pulled out the avionics screwdriver and removed the GPS (which started it all, remember). Lo and behold, there was water coming out of the SCAT tube that ventilates the stack. Of course, I was keeping up my scan all this time.

My wife chimed in, Dear, my left foot is wet. Eureka!

Since the IFR GPS was repositioned lower on the stack, the fluid dynamics had changed and the vented air was flooding everything with water droplets.The next step quickly appeared: Dry off the circuit breakers, which are below the stack. Every tissue up front. I put my spouses finger in the fitting that was dripping water, replaced a short time later with a wadded-up tissue. Master on. No smell. Avionics master on. Working comms. Resume squawk. Yes, the autopilot will hold heading. Altitude hold now works. Lights on in the cabin. Finally the flashlights became unnecessary.

Kansas City Center, Seneca XYZ with you once again, after having experienced total electrical failure.

Seneca XYZ, we were beginning to wonder. Call Memphis center now on 12X.Y. Im not sure they ever got it.

Needless to say, Memphis was helpful. As it turned out, the nearest unbroken VFR was at Memphis and after putting the chocks to it at a gorgeous FBO and getting a motel room, I announced that there was no way we were going to New Orleans. I was more concerned about the flight home.

Handhelds to the Rescue?
Yes, I was comforted by the handheld GPS. I was facilitated by the handheld comm. when I was finally within clear transmission reach of Memphis Center. But the real bacon saver was maintaining control and flying to VFR.

Is it possible to fly an approach with a handheld VOR/comm? If you have a good signal, and a second pilot, it may be. But, who has rehearsed this scenario?

Though my JD 200 is pretty good with the windshield antenna, and its reliable out to about 20 nm from the VORTAC, I contend that the level of distraction is such that a much better plan is to fly to VMC, fuel permitting.

I also think that cobbing together an approach plate while managing two loose boxes on cords and maintaining a scan is just a nightmare. And thats without even considering flying a miss. As it was, workload was sufficiently high that a single-handed approach would not have been a happening thing.

Remember, no handheld GPS is legal or safe for finding the runway. If you look at the RAIM check notices on an IFR GPS, youll see the IFR GPS is often giving potential error=1.2 nm notices these days.

If youre unfortunate and havent planned enough fuel, flying an illegal GPS approach monitored by a VOR handheld receiver may be your only option, but you shouldnt go out in such conditions with 45-minutes reserve in the first place. Think how youll juggle those boxes and buttons and charts while flying the airplane with a flashlight in your mouth.

It cant be denied that, in the engine failure scenario, the handheld GPS is indeed invaluable. If you have enough altitude you can glide to a point just over the runway and try to salvage the situation when you break out. If you hit something, well, you probably would have anyway.

But in the scenario of total electrical failure, you dont have to do that. The aircraft will still fly.

The proper approach is to know where theres VMC, carry enough fuel to get to VMC and retain control of the airplane so you live to get to VMC.

Your fallbacks in the event of electrical failure are proper preflight, ample fuel reserves to get to VMC, and knowledge of where that VMC is.

If you have communications, Center can tell you where you are and which way to fly. At the risk of sounding preachy, never, never, continue in ice when total electrical failure occurs. A powered, silent brick with a frozen pitot has few options.

My avionics installer made an error. Hes human too, though I will confess to leaving an irate voice mail on his personal cell phone. I now have no NACA duct, and have an internal vent fan, as called out in the most recent Northstar M3 installation manual.

The avionics guy on call at the shop in Memphis determined that he couldnt get a vent fan on a Friday night, and so I flew back on the lee side of the low as it was moving off to the east, with the NACA duct taped over and the SCAT tube stuffed shut.

Ive since cleaned out my aircraft of all alkaline batteries and replaced every one. If Im going to carry five pounds of penlight batteries, every one had better be producing 1.54 volts.

My Radio Shack rubber ducky extension is now in the pilots calfside pocket and the flashlights (the one not on my neck) have lanyards that hang out of the pockets for finding with a single blind hand sweep.

Next time, if there is a next time, will go a bit smoother.

-Bruce Chien is a CFII, AME and owner of a Seneca II.