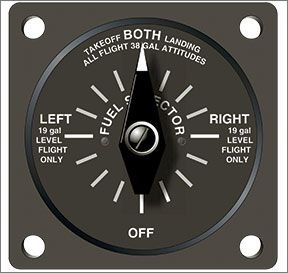 When considering various portions of routine flight operations, it’s safe to say that landings comprise a majority of the time spent in training and practice. But takeoffs also pose risks; perhaps most important among them is that the airplane isn’t ready to fly. The reasons could involve something simple like a pitch trim setting or a door that isn’t properly latched. Ensuring these kinds of problems are resolved before adding takeoff power is one reason before-takeoff checklists were invented.

Every before-takeoff checklist we’ve seen includes some reference to ensuring the fuel system is properly configured. In some airplanes, that can mean a single valve is open. In other airplanes, the valve must be in the “both” position, or set to draw fuel from the fullest tank(s). What’s often missing from these checklists is any mention of switching tanks just before takeoff.

Doing so can inadvertently position the selector on an empty tank, or one without enough fuel to power the engine through the highest-consumption phase of flight. One obvious danger of switching tanks just before takeoff is there will be just enough fuel in the lines to get the airplane off the ground, but no further. That’s apparently what happened to a pilot with enough experience to have known better.

BACKGROUND
On January 16, 2012, at about 1242 Central time, an Aerostar Aircraft Corporation PA-60-601P experienced loss of directional control during initial climb after takeoff and crashed in an open field near the Philadelphia (Miss.) Municipal Airport (MPE). Visual conditions prevailed. The airplane sustained substantial damage due to impact and a post-crash fire. The solo airline transport pilot was fatally injured.

Investigation
The airplane came to rest in an open field approximately 930 feet east of and about 523 feet from the departure end of MPE’s Runway 18. All components necessary to sustain flight remained attached or were found in close proximity to the main wreckage. An energy path of dirt and debris was oriented on a magnetic heading of 120 degrees.

The flap selector was in the down position while the landing gear handle was in the up position. The left engine’s propeller blades were not feathered. All three blades of the right engine’s propeller exhibited rotational scoring, indicating the engine was producing power at impact. Ground-scar calculations revealed left engine rpm was approximately 764 at impact while the right engine rpm was approximately 1315.

Earlier on the day of the accident, a mechanic reinstalled, rigged and leak-checked the left engine servo fuel injector after it was bench tested. The mechanic also performed a full-power run-up and filled the center fuel tank. The left wing fuel tank had four to five gallons fuel; the right tank had two to three gallons.

The airplane’s fuel system consisted of two wing tanks, each with 62 gallons usable, and a fuselage tank with 41.5 gallons usable. Fuel from the fuselage tank flows into each respective wing fuel sump, then to the respective engines. With either fuel selector positioned to the crossfeed position, fuel is supplied from only the opposite wing tank and not the fuselage tank. Electrically operated valves in each wing’s fuel sump assembly are controlled from two fuel selector switches, one for each engine, with three detent positions: off, on and crossfeed. The as-found positions of the fuel selector knobs were unreliable due to post-accident damage.
The fuel sump assembly exhibited extensive heat damage. The position indicator for the No. 1 valve was in the closed position, while the position indicators for the Nos. 3 and 4 valves were in the open positions. The No. 2 valve was destroyed by fire; therefore, its position could not be determined.

Per the airplane maintenance manual, the Nos. 1 and 3 valves are associated with the left engine, and the Nos. 2 and 4 valves are associated with the right engine. The as-found positions of the Nos. 1 and 3 valves at the fuel sump assembly equates to the left fuel selector being in the crossfeed position. Although the position of the No. 2 shutoff valve could not be determined, the maintenance manual also indicates that the only scenario in which the No. 4 shutoff valve would be in the open position (as viewed post accident) is when the right fuel selector is in the on position.

In addition to an airline transport certificate, the 48-year-old pilot had some 6200 hours of experience and was type-certificated in several transport category airplanes. A month earlier, he completed an extensive recurrency program in the accident airplane, including 24 hours of ground training and 2.0 hours of flight instruction. The ground training included systems instruction.

Probable Cause
The NTSB determined the probable cause(s) of this accident to include: “The pilot’s failure to maintain directional control during takeoff following loss of power to the left engine due to fuel starvation. Contributing to the loss of control was the pilot’s failure to feather the left propeller following the loss of left engine power.”
Although discrepancies in the left engine’s fuel injection system were noted, it’s more likely the takeoff roll began with the left engine in crossfeed, running on the unusable fuel in the almost-empty right tank, with the right engine drawing from the fuselage tank. As the NTSB noted, “…the left engine was being fed only from the right fuel tank, which had very little fuel. There was likely enough fuel in the right tank and lines for the pilot to taxi and takeoff before the left engine failed….”

The Aerostar’s fuel system is rather more complicated than others, but even simple airplanes don’t fly very far if their engine can’t get fuel. Once an engine is running before flight, it’s best to leave its fuel selector alone until safely aloft.