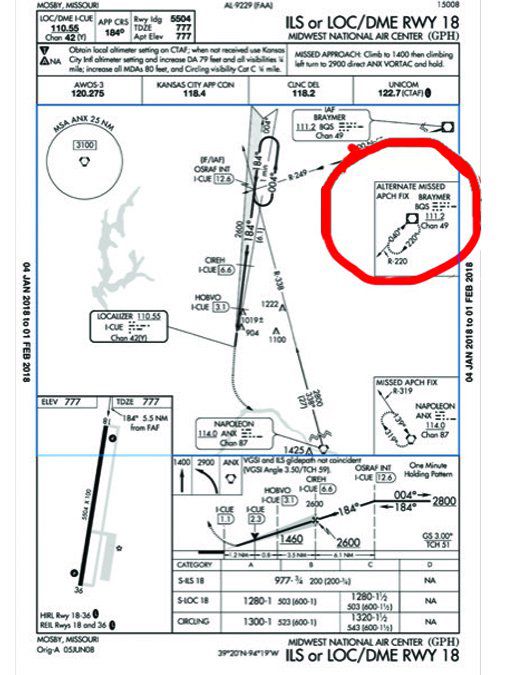 I was in the left seat of a Beech Bonanza, receiving an instrument proficiency check in the Kansas City, Mo., area. We departed Lee’s Summit Municipal Airport (KLXT), simulating a takeoff into instrument conditions, and proceeded toward Midwest National Air Center Airport (KGPH), a short distance to the north. My instructor gave me headings to simulate radar vectors in the clear, cold and turbulent low-level air.

We intercepted KGPH’s ILS Runway 18, turning inbound initially with a strong tailwind. I commented that we would probably have to descend at 700 fpm or more (as opposed to the normal 500-600 fpm) because of the high ground speed southbound. But quickly the wind changed; we bounced through the wind shear that accompanied the shift and, as it turned out, a normal descent kept us on the glideslope.

The ILS 18 at KGPH has a published missed approach procedure featuring a route toward the Napoleon VOR (ANX) for holding. However, my preflight planning revealed that ANX was temporarily out of service. A Notam directed that the alternate missed approach procedure was in effect. There was a big red Notam box displayed on my tablet that, when pressed, revealed the same information.

A holding fix for the alternate missed approach procedure is printed on the IAP chart. An FDC Notam called for an initial climb on runway heading to 1400 feet, then a turn northeast in a long (as I recall, about 24-mile) trek on the 220-degree radial inbound toward the Braymer VOR (BQS). To ensure I’d remember when I got to the missed approach point, I used the Notes function of my flight planning software to circle the alternate holding fix on the approach chart, as depicted below. Except for the change in the holding fix and the addition of a radial to track (both of which were published), the missed approach procedure was about the same, using the same altitudes. If the procedure was substantially different, I would have written the alternate instructions from the Notam directly on the chart as well.

If an alternate missed approach procedure involves a VOR-based route or holding fix, flying it actually may be easier if you use ground-based navigation equipment—the #2 VOR, egad—at least for the initial portion of the missed. There’s still something to be said for the relative simplicity of “tune, identify, twist (the omnibearing selector, or OBS) of a VOR “nav head” (display) when compared to entering and activating a GPS waypoint.

So, before I even began the approach, I set up the #2 VOR to navigate to BQS “old school”: I tuned the VOR and listened to its identifier to confirm I had the correct frequency selected and was receiving the navaid’s signal.

Knowing I would intercept the 220-degree radial inbound, I spun the OBS to 040—the radial’s reciprocal, the direction I would be flying to the holding fix. (Of course, the easy way is to spin the needle until the 220-degree radial is at the bottom of the VOR head, or “tail” of the needle). If you don’t use the #2 VOR every now and then, you might fall into the trap of dialing the outbound radial into the nav head instead of the inbound course. Hijinks may ensue, since you’ll end up with reverse sensing as you fly toward the VOR.

Passing the missed approach point (MAP) and (simulating) not seeing the runway environment, I ignored the moving map as the GPS automatically entered SUSPEND mode, except as a backup to confirm I remained on heading for the initial climb portion of the procedure.

Reaching 1400 feet msl, the initial altitude before turning toward BQS and the height I’d exit the GPS SUSPEND mode if flying the standard missed approach, I began a climbing left turn to 360 degrees. Unless you’ve very close to a VOR station, where the radials are very narrow, it’s generally recommended to intercept a radial at 30 to 45 degrees off-heading. I like to make things simple, and it’s easy to remember “heading 360,” which is 40 degrees off the radial I needed to intercept.

For the time being, I still ignored the moving map except for very general situational awareness. I flew 360 degrees until the #2 VOR needle came alive, then I followed the displaced needle to turn inbound on the 220-degree radial, heading 040 (actually about 030 because of the strong northerly wind).

Only then did I exit SUSPEND on the GPS, enter BQS as a waypoint, activate “Direct To” BQS using the GPS (while still centered on the #2 VOR-displayed radial) and return my focus to the GPS and primary navigation display (in this case, an HSI) to fly toward the VOR. I was then using the GPS in an advisory capacity, while still actually tracking the VOR signal by crosschecking the #2 display.

As if that’s not enough, there’s yet another oddity of flying this type of alternate missed procedure: The holding pattern is not depicted on the GPS moving map. It is possible, however, to depict at least part of the holding pattern, the inbound course, on the GPS display. Here’s how.

Cross the VOR and begin a standard-rate turn to the outbound heading (220 degrees in this case, plus or minus wind correction). After completing the turn (to avoid trying to do too much as you make the turn itself), press the OBS button (or equivalent) on the GPS. Assuming an HSI-equipped airplane, spin the HSI course needle to the inbound heading (040 degrees). The moving map will now display an infinite-length magenta line from the VOR representing the 220-degree radial. This is your inbound course. You can, of course, simply continue to use the #2 VOR head to fly the hold. The OBS mode improves your situational awareness, however.

Time your outbound leg, then turn inbound to intercept the OBS mode-displayed radial. ‘Round and ’round you go, applying wind correction and altering the time you spend on the outbound leg to keep you in hold-protected airspace, and so that you intercept the inbound course when you’re inbound to the fix. Remember: In old-school holding patterns (those not beautifully painted on a moving map display), your outbound timing begins when you are wings level at the end of the turn or you are directly abeam the holding fix (the #2 VOR’s TO/FROM flag flips), whichever occurs last.

Let’s go back to what AIM 5-4-21(e) tells us: When a preplanned alternate missed approach procedure exists, the holding fix and holding pattern are printed on the approach chart, but the alternate missed approach instructions (altitudes and routes to the fix) are not. This is “to avoid [pilot] confusion” that might result if the textual description of two sets of altitudes and routes were printed on the same chart. You can see where and how to hold, but not how to get there or how high you should fly.

So where do you find the alternate missed approach instructions? In the FDC Notams. You know, those often-detailed advisories that every fiber in your preflight planning being wants to blow past when you download them by the dozens, most of which have no bearing on where and how you’ll fly (I’m not likely to take a Beech Bonanza over North Korea, for instance).

The good news is that the popular electronic flight bag (EFB) software packages include a Notams selection as basic information for a specific airport you’ve selected, and flag Notams applicable to a specific approach procedure when you call it up, as explained below. It’s easier than it used to be, when you had no reminders or shortcuts to find FDC Notams that have a bearing on your flight…but you still need to read them and apply what they tell you.

One of the dirty little secrets of satellite-based navigation is that the workload of inputting and activating waypoint information is intense, far more than the old-school “tune, identify, twist” of VORs. You can’t load non-database procedures into the GPS ahead of time, while you can do so with VORs. You don’t need the distraction of a lot of GPS button-pushing at the very beginning of a missed approach, while you’re very close to the ground.

Takeaways From The AIM

AIM paragraph 5-4-21 highlights some of the differences between using the primary missed procedure and the alternate:

• The alternate missed approach instructions are not published on the IAP’s chart. The holding pattern, however, will be on the chart.

• The alternate procedure may be based on navaids not used in the approach procedure or the primary missed approach.

• When the alternate missed approach procedure is implemented by Notam, it becomes mandatory.

• The Notam will specify both the textual instructions and any additional equipment requirements necessary to complete the procedure.

• ATC may clear you for the alternate procedure when necessary.

• When the alternate missed approach is issued prior to beginning the approach, the pilot must either accept it, request a different full approach procedure or coordinate alternatives with ATC.

The Three Types Of An Alternate Missed Procedure

Given that one purpose of a published missed is to provide guidance in the event of lost communications, the third type of alternate missed presents a challenge: What do you do if you go “lost comm”? The rule for lost radio communications is to procedure as cleared, as expected or as filed. The expectation of a heading-and-altitude-missed in practice is that you’ll be given vectors back to the approach. If I lost comm while flying such a miss, I’d fly direct to an initial approach fix and then “own nav” my way through the procedure.

– As a backup for inoperative navigation facilities, as described in the article.

– To amend a procedure, or to fix a typographical or other error, until a revised approach chart is printed. For example, the VOR-A approach at KEWK has a revised altitude. My EFB includes a Notam advisory box (above) while the amendment itself is an FDC Notam.

What About The Autopilot?

In addition to which missed approach to fly, there’s the question of when, actually, to commit to executing the procedure, and how to do it. A non-precision approach not based on GPS might rely on timing, as in “if you fly such-and-such a heading at 90 knots groundspeed for two minutes and forty seconds,” you’ll be at the missed approach point (MAP). Non-precision approaches using GPS as primary navigation offer a specific annunciation when arriving at the MAP, and an approach offering a glidepath has decision height or altitude below which we can’t go until we see the runway environment.

The AIM tells us to execute a missed approach when:

Remember that if a missed approach is executed before reaching the MAP, you should fly the lateral navigation path of the IAP to the MAP, then fly the procedure. It’s okay to start climbing.

– We arrive at the published MAP or decision height and visual reference to the runway environment is insufficient;

– We determine a safe approach or landing is not possible; or

– ATC tells us to execute the miss.