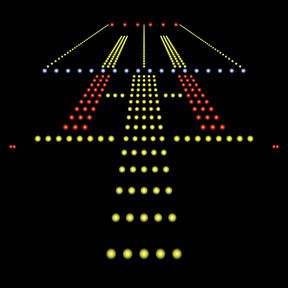 The Boeing 737 collided with 75-foot high electronic transmission cables, approximately 7000 feet short of the runway. The crew had been flying a Runway 27 localizer back course approach when the first officer misidentified street lights on a stretch of interstate highway along the east airport perimeter, thinking the lights were part of the runway environment. The FOs callout influenced the captain to continue below minimums for the approach and into the power lines. The crew

executed a missed approach and recovered successfully at a former military airfield. No one was hurt.

The NTSB found several errors that contributed to the mishap. For one, ATC failed to provide accurate weather information to the crew, which might have warned them not to expect visual contact with the runway environment while still more than a mile short of the threshold. Controllers also failed to vector the aircraft onto the localizer outside the Final Approach Fix and “committed other errors in handling the flight,” according to NTSB, contributing to full-scale deflection of the localizer needle inside the FAF that called for a missed approach the crew did not make before impacting wires.

Further, an FAA inspector conducting an en route inspection of the flight from the 737s jump seat did not inform the crew of the errors they were committing in the planning and execution of the approach. Ultimately, however, NTSB found the crews lack of approach planning, which among other things would have helped them visualize the type of approach lights to expect and when in the approach to expect them, was the probable cause of the crash.

If all our landings were on familiar runways in clear, bright daylight conditions, it would be much less important to think about what the runway will look like ahead of time. You may be arriving at night or in reduced visibility, however, or popping out of the clouds and murk just a few hundred feet above ground near the runway threshold. You may be trying to see through rivulets of rain streaming up your windscreen, or peering through a small rectangular “hot plate” windshield deicer

with the rest of the windows opaque with ice. The runway itself may not contrast well with surrounding terrain cover, or be partly obstructed by trees or hills until youre nearly on top of it. The last thing you want to do is mis-identify something on the ground as the runway or the runway environment, as had the crew of the 737. To compensate for obstructions to vision and avoid mistaking other surface objects for the airport, its best to visualize the runway environment as part of your approach or before-landing briefing.

What to Look For

When preparing for any low-visibility landing, whether night VFR, day VMC in marginal conditions or an IMC arrival, there are a number of things to consider that will help you arrive safely.

Pattern of approach lights. Know beforehand not only whether there will be lights guiding you to the runway (and, if they are pilot-controlled, how to turn them on), but also the specific pattern of lights you expect to see. Knowledgeable foresight of the pattern of approach and runway lights will prevent you from mistaking street lights or other illumination for the runway environment.

Orientation of runway relative to approach path. Nonprecision approaches not closely aligned with the centerline of the runway to be used are identified with a letter in lieu of the runway number, e.g., “VOR-A” instead of “VOR 27” or similar. This is your cue that youll need to maneuver to align yourself with the final approach course; more so, youll initially be presented a less obvious visual picture of the runway environment when breaking out or coming within range of the pattern. Study the approach chart to visualize whether youll see the runway straight ahead, slightly to the left or right, or perpendicular to your direction of flight as you near the missed approach point, and how it and the approach lights

will appear as you circle to land if flying something other than a straight-in approach.

Runway length and width. Runways that are wider or narrower, longer or shorter than what is normal for you will present unusual visual cues that can cause you to misjudge your height or approach angle. When preparing for a low-visibility arrival, consider whether the runway will look different than what youd usually expect.

Wider or shorter runways will look closer, prompting you to flare high and “drop it in,” or land long as you subconsciously shallow out your glide angle because you think youre too low. If you get terribly distracted by conditions, a wide runway may trick you into getting dangerously slow because you think youre too close; the sink rate may become dangerous or the airplane may stall.

Conversely, narrower or longer runways will appear farther away and you may not flare enough before hitting the pavement hard. Thinking youre higher than actual, you might come in at too shallow an angle, impacting obstacles on the final approach path. Or if you pop out of IMC close to the threshold you might subconsciously dive toward a narrower runway, picking up extra speed thatll cause the airplane to float in the flare and land long, possibly running off the end of the runway. This could be aggravated if the runway is short as well as narrow, characteristics that commonly go together.

Runway slope. An upsloping runway may make it appear you are higher than normal, leading to flying too low on approach. Downsloping runways have the opposite effect, potentially contributing to a runway overshoot.

Runway surface type. Is the runway concrete or asphalt? A concrete runway may be harder to see if theres snow on the ground, or if its surrounded by sandy

soil or dried fields. Dark asphalt will be harder to see at night or low visibility, especially if the pavement is wet. Consider the surface type when evaluating what the runway will look like as you near the airport.

Striping patterns. Consider also what the runway striping pattern will look like. Will they make the runway more obvious in poor visibility conditions? Is there an identified runway touchdown zone? Are intersections and taxiway turn-offs clearly marked?

In addition to marking the pavements edges, runways served by instrument approaches include a lighting system designed to help pilots orient themselves.

Runway End Identifier Lights (REILs) are flashing white lights on either side of the runway threshold. REILs are featured on runways that are surrounded by other surface lighting, those that are not highly contrasted by surrounding terrain, or are commonly used during low-visibility conditions. Be cautious to avoid mistaking commercial sign and other pulsing lights for REILs on runways that are often near shopping centers or highways.

Runway edge lights are white, except that on instrument runways amber replaces white in the last 2000 feet of the runway or half the runway length, whichever is less. This is designed to help the pilot identify a safe touchdown zone, or more to the point, to prompt the pilot to go around/fly the missed approach, as necessary, if the airplane is not firmly on the ground before reaching the amber lights.

Centerline lights, often installed into the pavement of runways served by precision approaches, are white from the arrival end until the last 3000 feet of the

Touchdown zone lights are installed on some precision approach runways to indicate the touchdown zone when landing under adverse visibility conditions. They consist of two rows of light bars on either side of the runway centerline. The system consists of steady-burning white lights that start 100 feet beyond the landing threshold and extend to 3000 feet beyond the landing threshold or to the midpoint of the runway, whichever is less.

Visual Descent Points (VDPs) are often depicted on non-precision approaches as the optimum position to begin a constant-angle descent from Minimum Descent Altitude (MDA) to the runways touchdown zone (see above). In most cases you should anticipate a three-degree descent angle inbound from the VDP; the approach chart will indicate if the angle is steeper. Because a VDP may warn of obstacles further from the runway, do not descend below MDA prior to crossing the VDP even if you have the runway in sight-towers, wires or trees between you and the airport may be hard to see, especially at night or in reduced visibility.

Approaches without charted VDPs have not been assessed for terrain clearance below the MDA, and may not provide a clear vertical path to the runway at the normally expected descent angle. Therefore, pilots must be especially vigilant when descending below the MDA at locations without VDPs. This does not necessarily prevent flying the normal angle; it only means that obstacle clearance in the visual segment could be less and you should use greater care to look for obstacles.

The Aeronautical Information Manual (AIM) section 5-4-5 suggests following a visual glidepath indicator, if available, to be assured obstacle clearance. It cautions that pilot should “carefully review approach procedures, prior to initiating the approach, to identify the optimum position(s), and any unacceptable positions, from which a descent to landing can be initiated (in accordance with FAR 91.175(c)).”

Most of the time we land in pretty good visibility, and most runway visual cues provide information that coincides with our expected perception of distance, height and glidepath. When visibility drops or the environment throws in optical illusions, our safe arrival depends on knowing beforehand what to expect. In addition to altitudes, headings and the missed approach point and procedure, consider the visual portion of your arrival as you prepare for a night or marginal VFR arrival, or as part of your instrument approach brief.