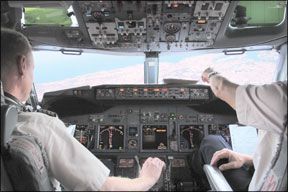 Declaring an emergency apparently isnt what it used to be. Recently, an airline crews uncertainty about their available fuel led them to declare, but thats when events got murky (see sidebar on page 6). Since then, a lot of people have gotten into the act of discussing this event, including the controllers union. All of which has led many of us to think about the process and ramifications of declaring an emergency.

Even new student pilots understand that when you are forced to use the “E” word, the world is supposed to open up for you and everyone is supposed to do

everything possible to make your life easier-and longer. But the reality and responsibilities run deeper than that.

What Kind of Emergency?

In practice, there are two kinds of emergencies: precautionary and OhMyGawdWeAreGonnaDie. Of course, theres no official distinction; an emergency is an emergency. But we might find ourselves declaring an emergency for these two reasons.

Obviously, immediate life threatening emergencies are the biggest concern. Say you had a bird strike and the bird came through the windshield and hit your face. Youre injured and struggling to control whats left of your aircraft while your face is getting further pummeled by 100+kt winds. Or perhaps youre flying a twinjet and an engine came apart and took out the hydraulic power to the controls. Both of these very real situations require immediate and unconditional preferential handling. There is no question that you declare an emergency. Thats easy.

A precautionary emergency isnt as clear-cut. You might declare a precautionary emergency when somethings abnormal and you want either additional assistance or you may be forced to deviate from a clearance or break a conspicuous regulation. Maybe that bird strike didnt penetrate the windshield. Instead, you just cant see out adequately. Or maybe nothing else went wrong with that engine failure. Life goes on pretty normally on just one engine in a jet, but its safer to declare that emergency and get some preferential treatment just in case.

Its difficult to know if you should declare in these precautionary situations. We know that we alone are responsible for our aircraft and theres really very little that anybody on the ground can do, and by declaring an emergency we get a lot of visibility and attention that we may not want. (What if the situation were a low fuel emergency because you simply forgot to fill up? Dont really want to advertise that one, do you?)

Yet, although youre still pilot in command and are ultimately responsible for the safety of the flight, there still is a lot that folks on the ground can do to help. A good controller could give careful vectors and detailed altitude step-downs all the way to the runway to the victim of the bird strike who cant see out. The pilot of the jet really doesnt know the condition of his aircraft other than the engine failure. There might be other problems such as undetected fuel leaks. That pilot should declare that precautionary emergency to get preferential handling to land as soon as possible. They might even ask the airport to roll the emergency equipment (if so equipped) just in case.

Finally, there are certain transport-category aircraft where a total flap failure is not uncommon. So much so, that no-flap approaches and landings are a regular part of the training and checking. However, the minimum safe no-flap speed while maneuvering on approach is about 200 KIAS. You may recall that the maximum speed in an airport traffic area is 200 KIAS. Thus, when maneuvering for a no-flap landing, its entirely likely that the pilot will bust the speed limit.

Sure, the no-flap approach and landing is a non-event, but perhaps the controller notices a much higher speed than hes used to seeing and decides to write it up. If the pilot declared an emergency theres no problem. Without declaring an emergency, though, there may be some explaining to do later about the minimum safe airspeed in that non-standard configuration.

Theres an old saying: “Id rather be the key witness for the defense at my hearing, than the guest of honor at my funeral.” The obvious point is to do whatever you think is necessary to survive the experience and deal with any consequences later.

Lots of us independent minded pilots think that its a weakness and a sign of personal failure of some type to declare an emergency. It isnt. Take the smart, conservative, safe approach and declare the emergency and let the circumstances, if any, sort themselves out later.

Wed much rather declare and get some additional help that we maybe could have done without, than find ourselves deeper into the problem, wishing wed declared. Take that engine-out problem in the twin-jet thats just shy of routine. However, say the engine failure punctured a low-pressure fuel line. The fuel loss rate is low enough that it goes unnoticed. In flight, the leaking fuel is being cooled, vaporized and blown rearward out of harms way by the slipstream. But once you land and slow down, it might start dripping on the hot section of the engine thats cooled to, oh, about 300 degrees Fahrenheit by then, and catches fire. That one time of having the fire trucks standing at the ready will make every other “false alarm” worthwhile.

What Rights Do You Have?

Anything you think is necessary to achieve a favorable outcome is permitted. Declaring an emergency opens up all kinds of doors. First, you are now exempt from all the regulations about speed, altitude, routing, etc. But dont get carried away. While you certainly should get preferential treatment, that doesnt mean that all the other traffic will go away or the mountains will shrink. Youve still got to fit into the system and you should do so to the limit of your ability. That will enable the controller to help you even more because he wont, for instance, be spending his energy getting the traffic out of your way.

We tell that joke here to remind us that no matter what assistance youre getting from other sources, its your butt on the line and only you are ultimately responsible for the safe outcome of the flight. You should have a plan. If you dont, work with the controller to develop one. The controller knows the geography and resources in your area and can be a tremendous help. But remember, youre still pilot-in-command.

Take charge. Figure out what you need to do, ask for the help you need, and then fly the plan. Clear yourself of other distractions and focus on what youre doing. For instance, if ATC asks something about your situation that you think isnt meaningful at that moment and youre task saturated just flying the aircraft, just tell them to stand by. They might be required to ask, but youre not required to answer. You declared an emergency and the only thing you have to do is survive.

That said, in your haste to get to an airport, dont forget the basics: Aviate, navigate, communicate. Fly the plane first. Deal with any systems problems as best you can, but keep the plane under precise control. “Fly the plane.” This will also help focus and calm your mind.

Then, when youve successfully gotten things under as much control as possible, explain whats going on to the controller. Theres likely little (or nothing) he can do to help with the immediate situation, but knowing whats going on will help him give you the assistance you require. Consider combining “navigate” and “communicate”-get the controller to simply give you vectors to where youre going. That saves you having to reprogram the GPS or to look up a frequency. Those are distractions you dont need. Offload as many of your tasks as you can; take advantage of every resource at your disposal. Have to shoot an approach? Ask the controller to brief it for you while you set it up from the information he gives you.

One potential risk, though, in this course of action is losing situational awareness, or worse, giving up responsibility and ignoring your role. Dont. Accept that help, but keep track of whats happening and make sure it fits into your plan.

ITs Over. Now What?

When you declare an emergency, you may be asked to document the experience. Or not. In many cases with successful outcomes, nothing ever happens. If you cause a significant disruption of the normal flow of things for ATC, or if you do significantly deviate from the rules or cause ATC to lose their prescribed separation from other aircraft, you likely will be asked to submit a report.

Depending on what really happened, they may be just looking to cover their own butts, or they may be looking to hang yours. Take a critical look at what you did. Sure, you could always have handled it better, but did you handle it badly? If so, then consider getting legal advice. (The AOPA legal office may be able to give you all the help you require.)

A good question to ask yourself is if a reasonable pilot with similar experience and skill would have reacted similarly. If so, youve got little to worry about. Document that in non-emotional, factual terms and be done with it. If your self-critique, however, tells you that you handled the situation badly or even really messed up, consider filing an ASRS report. It might not completely insulate you, but it certainly cant hurt. Be sure to file one if the underlying cause of the problem is a stupid pilot trick.

Next, try to figure out what to do to fix the problem at the source and prevent it from happening again. Perhaps you need additional flight training or maybe all you need is a revision of your procedures. (New checklist item: Fuel?) Either way, address any shortcomings that became apparent. “Fool me once, shame on you. Fool me twice, shame on me.”

The bottom line to all this is simple: We shouldnt be too reluctant to declare an emergency. It can open most any door we might need and gives us more options. Its not a blank check, since its still best to work within the system and we may have some explaining to do later. Better the explaining, though, than dire consequences from the original problem.

Frank Bowlin flies CRJs for a large regional airline and is an in-dependent CFI in Watsonville, Calif. Hes never had to declare an emer-gency outside of the sim.