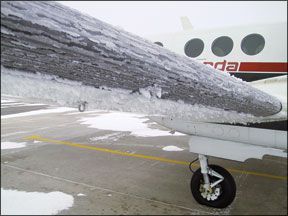 Many myths persist about the capability of airplanes to fly in ice, appearing to support techniques for ice avoidance or landing an ice-laden airplane that make ice accumulation acceptable. “Speed saves.” “More power is better than ice protection.” “Known icing certification makes flying in ice safe.” Like any myth these are rooted in truth, but they are not necessarily true themselves. With apologies to the Discovery

Heres our first in-flight icing myth: “Keep your speed up and you can land with a load of ice.” Landing an ice-laden airplane can be tricky, even with clear approaches to the longest runway around. Performing a tight, circling approach at night in low visibility? We dont even want to think about it.

Heres an example of what were talking about, from an NTSB report: “Prior to the flight the pilot obtained a full, low-level weather briefing and filed an instrument flight rules flight plan. Shortly after departure, the pilot encountered icing conditions and began to experience a severe vibration in the aircraft flight controls at 5000 feet msl. The pilot elected to return to the departure airport. During the approach the airplane continued to accumulate ice on the airframe and continued toward the terrain in a 1500 fpm descent. At 1750 feet msl the airplane broke out of the clouds with the windscreen completely covered with ice. Subsequently, the airplane impacted the terrain approximately 40 feet short of the runway and skidded to a stop on the runway, resulting in substantial damage to the airplane.

“Examination of the airplanes systems and powerplant revealed no anomalies that would have precluded normal operation. The airplanes wings and windscreen had approximately one inch of ice on the respective surfaces. The pilot reported that icing conditions were not forecasted or reported prior to his flight.

“The National Transportation Safety Board determines the probable cause(s) of this accident as follows: The pilots inadvertent encounter with icing conditions during initial climb. Contributing to the accident were the lack of visibility during the landing due to an ice-covered windscreen, and the structural ice that adversely affected the flight characteristics of the airplane.”

The greatest hazard of airframe ice is the adverse and unpredictable effect it has on aerodynamic surfaces. The wings and tail will be less effective with even small amounts of ice; further, since ice accumulation is not always symmetrical, theres a strong likelihood the adverse effects will come unexpectedly, without any warning.

If airflow disruption is the biggest hazard, it seems reasonable that simply keeping your speed up will overcome the adverse effects and assure a safe landing with a load of ice. This myth is busted, however, when you consider that in most airplanes keeping the speed up with ice accumulation requires the airplane be put into a descent-a pretty dramatic one in the case of this report. The airplane may not have the control authority to recover from the descent when time comes to land.

Secondly, and frequently overlooked in discussions of landing with a load of ice, forward visibility can reduce to nil with only a very slight coat of frozen water. At night or in poor visibility, even small amounts of accumulation on the windscreen can distort a pilots field of view, making landing difficult. Regardless of the time of day, its very likely youll have to resort to Lindbergh-style peripheral vision out the side windows to flare (such as it is with ice) and land.

Icing myth #1, that “speed saves” in ice, is correct as far as keeping the wing flying. But keeping your speed up is not a reliable method of bringing an iced-up airplane in for a safe landing-a reminder to pilots to avoid ice and, if ice is encountered, to execute your pre-planned “out” to remove the ice before you make your approach and landing.

Turbocharged power isnt a panacea, either. Again, the NTSB:

“The pilot reported picking up light rime ice while descending from 9000 feet for a GPS approach. As he neared the airport he was able to maintain only 17 inches of manifold pressure [36 inches is the normal full throttle MP for that aircraft]. The pilot executed a forced landing on a frozen river about one mile south of the airport. He reported the airplane normally stalls at 62 knots; however, it stalled at 82 knots during the landing.

Inspecting the airplane revealed the entire span of both wings contained 1/16 to 1/8 inch of rime ice on the lower surface of the wings from the leading edge trailing aft about 12 inches. Ice was also visible on portions of the leading edge of both wings, and the windscreen was iced over. The horizontal stabilizer was covered with about 3/16 inch of rime ice and the vertical stabilizer was covered with 1/8 to 3/16 inch of mixed ice. The [engine] air inlet was crushed and packed with snow. All three propeller blades were twisted and bent rearward. The nose and left main gears collapsed and the right main gear was pushed up into the wing. The rear spars on both wings were bent and the flaps were buckled. The pilot received DUATs and flight service weather briefings that showed the existence and/or possibility of icing conditions near his destination.

“The National Transportation Safety Board determines the probable cause(s) of this accident as follows: The pilots decision to continue the flight into an area with conditions that were conducive to icing and the loss of engine power due to induction icing.”

Our second icing myth, that its better to have extra power than to be able to remove ice, is correct…to a point. Extra power can allow you to climb through an icing layer (legally or not). But eventually you have to come back down. If you encounter heavy icing or an extended period of lighter ice accumulation in descent and on approach, the extra power wont help.

Additionally, wet, slushy snow or volumes of clear ice can block the air inlet, reducing power. Commonly an engines alternate induction air source is in the lower, low-pressure area of an engine compartment. If the inlet air filter clogs with ice or snow the induction air pressure is low enough the turbocharger may not provide full power. Ive heard several airplane owners say the 17-inch MP reported by the pilot in this mishap is common for the same type of airplane at full throttle when drawing induction air through the alternate air door.

Further, when iced, the propeller becomes less efficient at turning power into thrust, and the wings and tail become aerodynamic unknowns. What has been said about the effects of density altitude on airplane performance goes for airframe ice accumulation as well-you cant turbocharge the propeller, wings or tail. So icing myth #2, that power overcomes ice, does not hold up if the pilot is unable to escape to an area where ice is shed for descent and landing. Turbocharging, two engines and even turbine power, as demonstrated by the images of the ice-covered King Air on this page and on page 16, demonstrate an abundance of power is not itself an ice-avoidance strategy.

The third myth to explore is that FAA-approved “known” icing certification makes the airplane safe in icing conditions. The reality is its impossible to certify any aircraft-and especially small ones-to consider all icing conditions that may exist. For example, the FAAs icing certification standards do not include supercooled large droplets, a form of icing that can turn your flivver into an ice cube before you have a chance to perform a 180.

“The pilot questioned air traffic control about the weather and was told that they were not showing any precipitation. He requested and received clearance to progressively lower altitudes. The airplane continued to accumulate ice. He requested a turn, and this was denied by the controller as there were two other airplanes in the vicinity with similar icing problems. The airplanes airspeed continued to decrease and the pilot informed air traffic control that he wanted to divert to a nearby airport. He made two low passes over the airport while trying to clear ice off of the windshield; however, the windshield de-ice could not keep up with the rate of ice accumulation. The pilot stated he had to look out of the side window during the landing and once he descended below the tree line, he was unable to accurately judge his height over the runway. He said this was compounded by the light color of the new concrete runway which had snow blowing across it. A hard landing resulted after which the pilot taxied the airplane to the ramp. The right wing strut was bent and the wing was pushed into the fuselage during the landing.”

Even in a “known ice” airplane vision may be severely limited by ice. At its best a windshield “hot plate” deicer opens only a small rectangle for forward visibility. Often this clear zone is in the center of the windshield, not directly in front of the pilot.

Approval for flight in “known ice” in the airplanes limitations therefore does not mean the airplane is safe (or legal) to fly in any kind of airframe ice. What it does do is provide the pilot with the option of legally attempting a flight in areas of suspected rime or areas of very limited clear or mixed icing. Prudence dictates the pilot have a clear, pre-planned escape route into ice-free air even (or especially) if he/she intentionally exposes the aircraft to areas where airframe ice accumulation is likely.

Like the other myths, icing myth #3 is true to a point-“known ice” airplanes can intrude on ice-laden air-but the myth does not hold true if the pilot does not escape icing conditions if they are found.