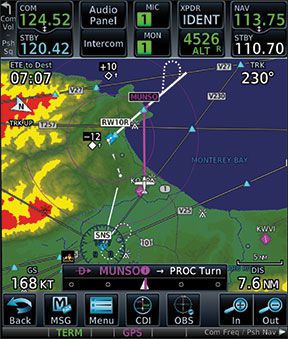 One of the really cool things about modern avionics is what they can do with basic information. A common example is pushing the “Direct” button, entering a destination and seeing the device pop up the on-course heading, the current ETA and a great-circle route overlaid on a moving map. Long gone are the days when we’d ask ATC for a vector to a distant point and “follow along on the Loran.” Another cool thing many of these boxes and related software can do is calculate a descent rate or angle while we’re en route and looking for the point at which we can begin a constant-rate descent to our destination.

A similar capability exists and is used in the terminal environment, where the magic can calculate a vertical descent angle (VDA) from the final approach fix (FAF) to the runway. It’s a virtual glideslope, where no ILS exists, and never was. But none of this is foolproof, and as a recent bulletin from the FAA describes, some of the sophisticated boxes in our panels can suffer from the age-old “garbage in, garbage out” computer problem.

CANPA Vs. Dive And Drive
To understand the VDA and additional vertical guidance provided by today’s navigation equipment, it helps to go back 20-plus years to the advent of CANPA, which stands for “constant-angle non-precision approach.” This concept, which received a lot of visibility in the 1990s, is the stabilized-approach alternative to the time-honored practice of crossing the FAF or an intermediate, step-down fix on a non-precision approach (NPA) and then increasing the aircraft’s rate of descent to arrive at the minimum descent altitude (MDA) well in advance of reaching the airport. Advocates say they have more time to spot the airport and/or runway.

This so-called “dive-and-drive” procedure had been implicated in a number of controlled flight into terrain (CFIT) accidents occurring on approaches. It seems pilots establish a healthy descent rate after crossing the FAF and either forget to level off or do so too late, hitting an obstacle or terrain. Who could have predicted?

In response, the CANPA procedures were developed, encouraging operators to establish a stabilized, constant-rate descent after crossing the FAF or a step-down fix, with the idea of arriving at or near the MDA and sighting the runway environment at roughly the same time. Old-timers preferred the dive-and-drive method, arguing that CANPA could result in a missed approach in variable weather. They say it affords greater opportunities to spot the runway environment and land from the approach. Besides, they say, only an idiot would fail to level off at or above the MDA after a steep descent inside the FAF. In many ways, CANPA was yet another example of the age-old collision between the accepted way of doing things and the new, safer way.
These days, CANPA has won that war, and things are safer.

Virtual Glideslopes
With the advent of the wide-area augmentation system (WAAS) and a GPS signal suddenly featuring greater accuracy, especially in the vertical dimension, the FAA and industry set about to create NPAs offering virtual glideslopes, like an ILS. In part, this was intended to leverage advancements in the hardware and software, in part it was to minimize the need for new ILS installations and in part it was to allow the FAA to decommission existing ILS facilities as they got too old and too expensive to maintain.

Subsequently, whole new classes of NPAs were developed and approved, based either on local barometric values or on WAAS-enhanced GPS. They’re known either as LPV or as VNAV approaches. Essentially, the GPS navigator necessary to fly them generates a virtual glideslope, enabling a descent first envisioned under CANPA some 20 years ago. The various types of GPS approaches that have been developed since then are summarized in the sidebar on page 21.

The Downsides
According to the Aeronautical Information Manual (AIM), “FAA policy is to publish VDAs on all nonprecision approaches.” Also according to the AIM, “The VDA provides the pilot with information not previously available on nonprecision approaches. It provides a means for the pilot to establish a stabilized descent from the FAF or stepdown fix to the MDA. Stabilized descent is a key factor in the reduction of controlled flight into terrain (CFIT) incidents.” All of which formalizes the CANPA concept.

There are some additional details pilots and operators should know about VDAs. First of all, the VDA’s descent angle can be computed using either the FAF or a step-down fix. In either case, it extends to the published threshold crossing height (TCH). When published, the descent angle and TCH information are found in the IAP’s profile view. Again, the AIM: “The optimum descent angle is 3.00 degrees; and whenever possible the approach will be designed using this angle.”

Importantly, a published VDA is advisory only. (Which makes the non-published advisory vertical guidance double-secret advisory?) As such, following a VDA does not provide any additional obstacle protection when operating below an MDA: Pilots must still remain at or above the MDA unless the required visual cues are sighted and they can maneuver to land on the runway per the FARs. In other words, according to the AIM, “The presence of a VDA does not guarantee obstacle protection in the visual segment and does not change any of the requirements for flying a nonprecision approach.”

That’s not all. According to the SAIB referenced in the sidebar on the opposite page, “The published vertical descent angle and navigation equipment-generated advisory vertical guidance offers no guarantee of meeting altitude constraints…. Advisory vertical guidance solely offers an aid to help pilots establish a continuous, stabilized descent during the final approach of the IAP….” When considering purely advisory virtual glideslopes, it gets even better: Since they’re not charted, and there’s no published descent angle, the electronic airspace system data used by avionics manufacturers and software publishers to update navigation databases is coded with a zero instead of the VDA itself. See the sidebar on the opposite page for how this database coding has had some unintended consequences.

Putting It All Together
There’s no question that a stabilized approach to a runway is preferable over other options, including “dive and drive” or some other operation. This is true if you’re flying a Cessna 152 or an Airbus A380. But there are limitations, among them is to remember you may not have obstacle protection and just as easily could bust an altitude. In some ways, VDAs are making it easy to implement CANPA, but it’s not always the best solution.
The advent of VDAs—thanks to WAAS-enable GPS, among other developments—has brought ILS-like final approaches to rural runways that never could afford a full-blown ILS. Other changes have resulted in LPV approach procedures with the same minima—200 and half-mile—as an ILS, or in substantially lowering other MDAs and enhancing not only the airport’s utility but the aircraft’s, too. That’s all good. But there can be unintended consequences. Database coding needs to be sorted out, and additional attention paid to obstacles, among them.

Which Approach Is Which?

Localizer Performance without Vertical Guidance (LP)
An RNAV function requiring WAAS, using a final approach segment (FAS) data block that computes, displays and provides horizontal approach navigation using the horizontal accuracy and integrity of LPV without the approved vertical guidance. The LP line of minima is provided at locations where issues prevent the use of LPV vertical guidance, and provides a higher probability of achieving the lowest minimum at these locations.
Every IFR-certified and installed GPS unit allows the pilot to descend to LNAV (i.e., straight-in) and circling MDAs. Baro-VNAV-equipped GPS systems can also descend to LNAV/VNAV minima. Meanwhile, WAAS-enabled GPS navigators can be used to descend to LNAV, LNAV/VNAV and LPV minima.

Another way to keep it all straight is to look for the decision altitude (DA) designation versus the minimum descent altitude (MDA) abbreviation on the approach plate’s minima line. Only procedures with vertical guidance have DAs. A descent angle may be provided on procedures which have only LNAV minima, to aid in a stabilized descent, but the MDA must still be respected.

On August 26, 2014, the FAA published a Special Airworthiness Information Bulletin (SAIB) entitled, “FMS and GPS Equipment Advisory Vertical Guidance with no Published Vertical Descent Angle.” The SAIB’s first page is reproduced at right. The upshot of the SAIB is to alert operators of two things.

First is a reminder from the FAA that so-called “advisory vertical guidance”—essentially an artificial glideslope generated by the avionics where no published/approved glide path exists for an instrument approach procedure (IAP)—are not charted. Further, such IAPs do not depict a descent angle in the chart’s profile view. As the SAIB notes, “Advisory vertical guidance solely offers an aid to help pilots establish a continuous, stabilized descent during the final approach of the IAP and avoiding the traditional ‘dive and drive’ method.” An example of how advisory vertical guidance is (not) charted is reproduced below the SAIB.

The second and most important thing in the SAIB is that the FAA’s database codes IAPs with advisory vertical guidance with a zero. This move apparently has wreaked havoc with some navigators and with some users. (A Garmin GTN650 user attempting to load the RNAV (GPS) RWY 20 procedure at Marks, Miss. (KMMS), noted on a message board that the 650 would not load the procedure but his Aspen glass panel and ForeFlight did.) According to the SAIB, “unintended consequences” of using a zero in the data base to denote the descent angle for non-approved, advisory-only glidepaths include:

Until the avionics manufacturers can revise and distribute new operating system software, the FAA’s SAIB strongly suggests “operators and pilots carefully review departure, destination and alternate airport IAPs during pre-flight” and, for IAPs lacking a vertical descent angle as charted above, using another IAP “not affected by this airworthiness concern.”