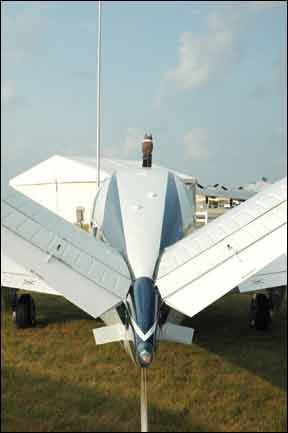 In our January issue, we ran an article, “Slow Down, You Move Too Fast,” which focused on aerodynamic flutter, how high speeds can cause it and what can be done to minimize it. One aspect of the article drew comments and criticism from readers, some of which were published in the Unicom section in our March issue, involved that articles statements referencing a fixed-wing aircrafts never-exceed speed (VNE) as a true airspeed.

Many readers rightly took us to task for those statements, pointing out VNE is an indicated airspeed-at least when published for the airplanes they fly-expressing skepticism and questioning our veracity. This article is an attempt to both respond to those valid criticisms and set straight the record associated with never-exceed speeds and our original statements.

First things first: We erred in publishing the January article before looking at it with a more critical eye. In particular, we should not have published the following statement without either additional detail or qualification: “And, as we know, the VNE redline or never exceed speed of the aircraft is depicted by a red line on the aircraft airspeed indicator at the top of the yellow arc. However, it is very important to understand VNE is not an indicated airspeed. Instead, VNE is a true airspeed.” This statement is too simplistic, and its misleading.

In fact, our research indicates VNE can be either a true or indicated airspeed. For example, the VNE published for vast majority of the personal airplanes with which we and our readers are familiar is an indicated airspeed denoted at the top of the airspeed indicators limits. About that there is no argument.

Similarly, there can be no argument that VNE for other aircraft is published as a true airspeed. In our March response to reader mail, we noted, “There are a number of references-especially involving high-altitude sailplanes and experimental airplanes-in which VNE is considered most accurately expressed as TAS. Some flight manual examples include the LET L23 Super Blanik, which begins to reduce IAS VNE above FL200, and the Schleicher ASK 21, which reduces it for altitudes above 5000 feet.”

All of that having been said, our emphasis on VNE being a true airspeed rather than indicated was misplaced. Accordingly, we want to take this opportunity to discuss this question in greater detail.

The FAA defines VNE simply as the aircrafts never-exceed speed. It is required to be determined by the manufacturer during certification testing, as described in the regulatory excerpt in the sidebar on the opposite page.

Meanwhile, the McGraw-Hill Dictionary of Aviation defines VNE as the “speed beyond which it is not safe to fly an aircraft.” The never-exceed speed exists because we risk structural damage or failure if we fly the airplane beyond it, whether for reasons of encountering gusts which will overstress the airframe, to prevent flutter or other reasons, including the manufacturers failure to test the aircraft beyond a certain airspeed. Theoretically, keeping the aircrafts speed below VNE prevents such failures, although airframes have been known to sustain damage or fail at speeds slower than VNE.

The never-exceed speed is calculated by reference to the aircrafts design dive speed, or VD, and is limited to 0.9 of VD. The design dive speed is one established by the manufacturer and is the highest speed at which the airframe normally will be tested. A successful VD test will be one in which flutter does not occur. This relationship is a regulatory one, and also is described in the sidebar on the opposite page.

Importantly, manufacturers arent required to determine or demonstrate a speed at which the aircraft will experience flutter. Instead, VD is used to demonstrate the airframe is free of flutter at that speed; VNE is then set at 0.9 of VD. The result is-or at least should be-a situation wherein flight at VNE guarantees the airframe will be free of flutter.

In a recent column in Flying magazine, Peter Garrison had this to say about flutter: “Flutter is affected by a number of factors, one of which is the true, not the indicated, airspeed. As you will have immediately perceived, this fact raises a logical difficulty. VNE, the redline on the airspeed indicator, is an indicated airspeed, but the critical flutter speed may be a true airspeed. So the margin separating VNE from the critical flutter speed gets smaller as you gain altitude. Furthermore, if you get really high up, the difference can be larger than the margin that separates VD from VNE, simply because the difference between indicated and true airspeed is greater than 10 percent.”

Garrison goes on to note the flutter margins imposed on an aircraft design also include a healthy error margin. As specified in FAR 23.251, there “must be no vibration or buffeting severe enough to result in structural damage, and each part of the airplane must be free from excessive vibration, under any appropriate speed and power conditions up to VD/MD. In addition, there must be no buffeting in any normal flight condition severe enough to interfere with the satisfactory control of the airplane or cause excessive fatigue to the flight crew. Stall warning buffeting within these limits is allowable.” Since VNE is established at no more than 0.9 VD, and since VD testing requires the manufacturer to demonstrate the airframe is free of flutter at up to the design dive speed, the resulting never-exceed airspeed should indeed provide a healthy margin below the onset of flutter. Given the math found in the certification FARs, VNE is set at a value providing a 33-percent margin before flutter could occur, a point Garrison makes.

So, while in rarified circumstances VNE can be a true airspeed, for the airplanes most of us fly, it simply isnt. Its clearly an indicated speed, unless the aircrafts limitations and markings state otherwise, as is the case with many gliders and other aircraft too numerous to list here. We regret the error. The point we were trying to make-that flutters onset is a function of true airspeed rather than indicated-remains both valid and an important distinction.

Many of the aircraft in use today have their design and engineering origins in the time immediately after WWII, before todays understandings of aerodynamics were available, before FAR 23 and before those aircraft were produced. In addition to the larger engines and turbochargers available today, enabling higher altitudes and greater speeds, its reasonable to conclude ensuing wear and tear means their margin above flutter can be significantly eroded when flown at the upper limits of their altitude and speed limits. While VNE isnt determined by reference to a true airspeed, flutters onset is.