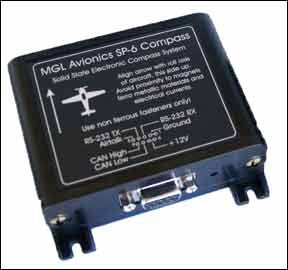 The latest-technology glass panels do many more things than the old, tried-and-true “steam gauges” with which many of us grew up. Through the “magic” of a software-driven display supported by various sensors, modern flight instrumentation can provide easy-to-read attitude information and a wealth of other data that simply wasn’t available before.

But there’s no free lunch. Along with their additional capabilities and accuracy, glass panels also bring different failure modes to the cockpit. One of these new-tech failure modes involves the way in which they determine the aircraft’s heading, along with other information, most of which firmly belongs in the nice-to-have-but-not-critical category. In many situations, losing heading information isn’t the end of the world—especially if GPS navigation remains available—but it can have a ripple effect on the panel’s various other systems and capabilities. I recently learned the hard way how failure of the heading sensor(s), usually a magnetometer, may not be a failure at all, depending on how the equipment is designed and installed.

En Route Failure
The setting was bucolic enough: We were flying straight and level on a cool summer’s morning somewhere west of the Black Hills and near Devil’s Tower, above Wyoming. There wasn’t a cloud in the sky and all systems were nominal, or so I thought.

We fly a relatively new airplane, equipped with dual electronic flight systems (EFIS). It was my scan (yes, I have the same instrument scan for VFR that I have for IFR flight) that clued me in to a potential issue.

“Hon’, that wind can’t be right,” I affectionately elbowed my co-pilot, who also happens to be the AMT who installed the avionics as well as my husband. “It says we’ve got a 100-knot crosswind, which I assure you, with this groundspeed, we do not,” I asserted. It was highly unlikely that our true airspeed was much above 180 knots at 23 inches/2400 rpm/11 gph fuel flow. If the wind computer was correct, our TAS would have been closer to 230 knots. This airplane, with this powerplant, will never see that paint-blistering number in real life. “And look, the headings don’t agree at all between the two ADHRS, either,” I noted. “Even the magnetic compass is wrong!”

This did not bring a smile to my co-pilot/AMT’s face. Our track was clear. We were right on the magenta line the computer had generated depicting our GPS track to our first waypoint, and our clear view of the landmarks below concurred with the moving map. The backup iPad GPS agreed, too, as did the secondary GPS on the EFIS motherboard. The wind computation was clearly off because of erroneous heading information being fed into the air data and heading reference system (ADHRS) computer by two highly sensitive magnetometers (one for each unit).

So why did the headings generated by the magnetometers and a whisky compass not add up? Had we somehow lost calibration on both magnetometers? And our compass suddenly needed a swing? All at the same time? That was pretty unlikely.

“Were you struck with lightning on the last flight?” I joked, knowing from experience that a jolt like that, though it won’t knock a metal airplane out of the air, will magnetize the airframe, causing all kinds of erroneous heading indications. I once flew a Piper Warrior with that problem. Nothing was stranger than floating down a perfectly centered ILS approach in the soup with the compass indicating you were in a 30-degree crab. Of course, a lightning strike probably would have fried the EFIS’s motherboard completely.

“NO!” was my perturbed co-pilot’s reply. “Just fly the line,” he muttered, twisting a couple of buttons and scrolling through the EFIS setup screens. “VFR, it really doesn’t matter anyhow.”

“Well, it’s pretty bizarre,” I replied. But he was right. On a day where we could verify our location visually and with multiple GPS, what did heading matter anyway?

For the record, the magnetometers and compass refused to agree with anything as we traveled across the far northwestern U.S. So I researched the issue while we still were en route.

Our magnetometers were mounted as per the GRT Avionics installation instructions. My AMT had been careful to make sure they were properly aligned with the ADHRS mounting (all were behind the baggage compartment bulkhead). Placement of any magnetometer also has to be at least 12 inches from the strobe power packs and wiring, too. We were even careful about putting anything metal in the baggage area just in front of the magnetometers, especially the tow bar. You see, anything that might create a magnetic field of its own, or is magnetized, can throw them off.

That knowledge alone should have clued me in to what our problem was. Just call me dense.

Unfortunately, neither sunspots, nor building cumulus (or their cousins, the cumulonimbus) could be blamed for our quirky units. So, what was really the problem?

It’s The Ground, Stupid!
As we headed southeast, away from the Pacific Coast and toward the Arizona desert, the whole crowd of magnetic instruments began to behave again. Weird. Very, very weird. Of course the AMT was thrilled. Nothing like a problem that fixes itself, he smiled, crossing his arms and enjoying the desert scenery on the way to Yuma, Arizona.

On the other hand, I simply could not let it go at that. I had to know why my sensitive electronic instruments and my brain-dead simple backup compass had both let me down. So I started talking with pilots and avionics technicians who regularly fly and work on aircraft in the northwestern U.S. And they laughed at me.

“Do you know what magnetometers are primarily tasked to do?” one asked me. “They find magnetic anomalies in the earth’s natural magnetic field, and many of those anomalies turn out to be deposits of ore,” he explained. Turns out that magnetometers are used extensively to aerial survey the entire planet’s magnetism, advancing both the science of plate tectonics and lining the pockets of mining executives over time by helping them discover new oil and gas fields, iron, copper and precious metals deposits.

“Have you looked closely at a sectional for Wyoming, Montana or Washington State?” the avionics guy chuckled. Well, yeah, I had. I had every sectional in the country scrolling neatly on my nice, new iPad. This had been its inaugural long cross-country, in fact. “No, no; a real sectional, the whole map, spread open,” he laughed some more. “Go do it and tell me what you see,” he demanded.

So I did. I pulled out the Billings, Mon., sectional chart, and there, somewhere between the Powder River MOA and the M46 (Colstrip) air field (properly set right next to the graphic used to depict a mine on the charts) was the answer. In a magenta box were the words, “Magnetic disturbances have been reported by aircraft in this vicinity.” The notation was far enough off my course such that I’d never have seen it on the iPad, which scrolled along, tracing my route and the area in a narrow band around it, as if I was holding a sectional folded nice and skinny so it would sit just so on my old-fashioned kneeboard.

Huh. Curious, I continued tracing our route all the way to Crest Airpark, near Renton, Washington, and sure enough, there were either mines or the notation of magnetic disturbances clearly marked all along the path. I wondered, why hadn’t my EFIS moving map kicked out a warning? I didn’t even get an error code for the disagreeing magnetometers attached to the two separate but conversational (between each other) ADHRS units. Odd.

It turns out that on TSO’d, STC’d and certified EFIS units such as the Garmins, Honeywell, Avidynes or Aspen Avionics I might have received a warning, letting me know either that the magnetic disturbances were in the moving map database, or that the magnetometers were off from the GPS heading by a significant amount. Aspen Avionics EFD1000 manual actually prohibits the use of its product for IFR within 750 nm of the earth’s magnetic poles because of problems with magnetometer accuracy at those latitudes.

Planning for Anomalies
I looked up some other details on the subject at the U.S. Geological Survey and discovered that the earth is riddled with these magnetic anomalies and is regularly surveyed using magnetometers similar to those we use for navigation to discover where these anomalies are and how they are changing. The maps they create are pretty cool, but would lead you to believe that there are far more anomalies than any sectional chart alludes to. Lots of them are over open water, where a pilot would be hurting if he was left with nothing but pilotage and ded reckoning to get him to shore.

I’m rather disappointed to say that none of the private pilot (or even instrument or commercial pilot) textbooks I hold even mention this phenomenon, and I have a library full of them. From now on, however, I’ll be sure to mention it to my students.

I’d think in this day of electronic aircraft, there would be more emphasis on the issues surrounding geophysical and spatial magnetism. As for me, I’ll spend more time studying new routes before flying them in an effort to figure this stuff out ahead of time (and I’ll stop folding the maps so close to my route—I’ll scroll around a little, who knows—I might learn something!).

Amy Laboda is a freelance writer, CFII-MEI and a National Lead FAAst Team representative. She holds an ATP and flies two experimental aircraft: one that’s sweet and slow and one that’s pretty and fast.