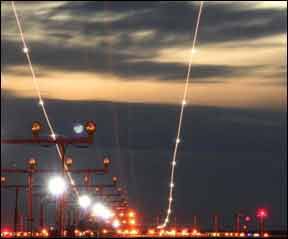 Trust is an intrinsic part of instrument flight. We trust ATC to keep other aircraft from running into us, we trust other pilots to know what they’re doing and we trust the instruments themselves. In the bargain, we also expect our onboard equipment—trust is too strong a word—to work and have a similar, positive outlook on electronic navigation resources: GPS, ILS, VOR, etc. But these systems, whether air- or ground-borne, can and do fail. In fact, expecting failure of various components comprising the aviation infrastructure is baked into many of its procedures.

Among the minimums published for almost any ILS approach procedure is the “fallback” localizer-only minimum descent altitude, for example. Beyond the well-recognized bits of infrastructure like ILS glideslopes and VOR stations are marker beacons and runway/approach lighting systems. If any of these so-called “supporting actors” fail, they can take with them our ability to, say, land straight-in instead of circling, or spot the runway at our destination in the first place. Inoperative tables were created in recognition of the role these components play, but procedures can’t be devised for every type of equipment issue we might have. What happens to your well-laid plans when the sequenced strobe lights of an approach lighting system—the “rabbit”—fail? Got contingency?

Planning For Failure
The idea that equipment and facilities can fail also is baked into the regulations covering IFR operations. The best example is the rules for communications failure, but the ones requiring us to file an alternate airport when the weather is below 2000/3 also come into play. See the sidebar on page 18 for more details on how to plan for alternates and equipment outages.

The most common equipment failure we might encounter involves the ILS and specifically its glideslope. Failure of either the ground-based transmitter portion or the airborne receiver is considered and appropriate minimums are published on each approach plate. Meanwhile, the idea that we need a marker beacon to identify either the glideslope intercept position or the decision height has succumbed to some combination of modernity and practicality. As the sidebar on page 19 highlights, it’s becoming increasingly rare to even find a marker beacon on an ILS. Instead, we can substitute various other yardsticks, including radar, DME and crossing radials.

All this is published on the chart these days, including the altitude/visibility penalties we must apply when executing the approach, but it didn’t used to be that way. In fact, there was a time when compensating for failure of various components of an ILS was embodied in the FARs.

An older copy of FAR 91.117 Takeoff And Landing Under IFR, in our possession clearly states we would be subject to an additional restriction: the actual weather. Under that older FAR, “…no person may begin an ILS approach when any component of the ILS is inoperative, or the airborne equipment is inoperative or not utilized, except as follows: (1) When only one component (other than the localizer) is inoperative and all other components are in normal operation, a straight-in approach may be made if the ceiling and visibility at the airport are at least equal to 300 feet and ¾ statute mile, respectively.” How that rule worked with the published procedures of the time, ca. 1966, we don’t know. We suspect it was used in conjunction with a contemporary approach plate to determine minimums and whether the approach could be begun.

DATA And Other NEEDS
Of course, beyond equipment outages there’s the need for accurate weather data. Lacking it, we may be forced to use higher minimums on a standard approach with everything working as it should: Lack of a local altimeter setting can trigger all kinds of mayhem, including higher minimums or forcing us to abandon the approach altogether since it’s no longer authorized. (The rules under which we’re operating—Part 135, for example, and our operating specifications—also can change the legality of even beginning an approach much less landing at the end of it.) Sometimes substituting weather or barometric-pressure readings from another, relatively close-by airport can keep the approach alive, albeit with a higher ceiling, greater visibility, maybe both.

Lack of radar to help define an intersection can render an approach unavailable or alter its minimums, too, thus changing its utility, which can plummet all the way to zero if conditions are below the available alternatives. Sometimes the equipment failure is on the airplane—such as a failed DME receiver to work with a VOR/DME approach or countless others that require DME to identify a step-down fix or even the missed-approach point.

Real Options
But lack of the appropriate equipment or inability to use it because it’s broken doesn’t mean we don’t have options. Those of us who fly regularly, particularly those of us who regularly use the instrument rating in actual IMC, know that weather—all our tools notwithstanding—is still dynamic and uncooperative, regularly defying forecasts on, at least, a macro level.

For example, an inoperative VOR transmitter once forced me into a new approach decision and, unfortunately, impacted pretty much all my local alternatives because those approaches to other airports depended on the same station providing course guidance into my home field. So, there was no non-precision approach that day into my home field, but there was a perfectly usable ILS available only 15 miles away. The bad news? That ILS on that day came with some kinks because the out-of-service VOR transmitter—radials from which defined intersections for the ILS final—wasn’t available. In those situations, ATC can help by identifying your position and passage of the key intersections. Of course, the controllers’ workload skyrockets and things in the area get slowed down.

Thankfully, conditions at the home field often differed significantly from that other airport 15 miles to the west. Across a ridge of terrain and nearer to a major river, the other airport sometimes suffered can’t-get-in weather when conditions allowed the non-precision VOR-A into home plate. Other times, the opposite was true: The VOR-A wouldn’t work because the ceiling was too low or there was too little horizontal visibility for the mandatory circle-to-land maneuver at the end. On that day, home plate had the needed VOR-A minimums, but no VOR meant no approach.

Prepare and Practice
Part of your standard preflight prep for your upcoming IFR flight naturally should include pulling and reviewing the approaches available for your destination. That process also should include a thorough review of the impact of alternate minimums published for those approaches as well as a check against the list of non-standard alternate minimums published for your divert airport.

Be particularly attentive to the failure triggers and the changes to the approaches brought by those failures. Some may vary according to the aircraft category of the plane, while others may apply across all categories. And some failures essentially eliminate the approach as an option as long as that failure remains in place.

For example, if circling to land is the terminating maneuver of a non-precision approach, but the runway’s approach lighting system is inop, the change in visibility standards may complicate things.

Consider that visibility required goes up to 1½ mile from one mile: Do the math. If the weather isn’t cooperating, you may need more room for your circling maneuver than is available if, say, visibility reports are down around that single mile.

Here’s where the practice part of dealing with inoperative components comes in. Practicing the circle-to-land maneuver during your recent IPC or other review with your double-I can and will help build confidence and competency for the prospect of needing to fly that maneuver for-real. Ditto for practicing other approaches to higher minimums; such as VOR and VOR/DME approaches, using the higher minimums of a failed “something” in the normal approach procedure.

What about the lack of a marker beacon, as described in the sidebar above? This sort of failure or omission can severely alter the prospect of some precision and non-precision approaches alike. There are instances in which a radar call-out from ATC or identifying the intersection with a VOR radial or DME distance report can preserve the approach’s original minimums. But in general, expect the minimums to go up in both directions.

One way to plan for and practice how you’ll deal with equipment outages can be to fly your approaches in the next-higher category. Most of us are flying airplanes fitting into either category A or B; Move up to the next higher one and fly the approach using those minimums and those speeds. This works best when performing a circle-to-land maneuver. You’ll find it‘s not as easy as it looks and playing around with one wing in the clag isn’t much fun, either. You’ll also find out what things will be like on that day some months from now when an aircraft-related mechanical failure prevents you from lowering approach flaps.

Planning for Failure
Pilots spend a lot of time practicing for mechanicals: engine failures, landing gear that won’t extend and other airborne issues. But we don’t think enough about other kinds of failures, those involving the ground-based equipment on which we depend and which can make or break our next approach. Much of what we need to know to do proper planning is readily available in the FARs and in the fine print associated with the terminal procedures.

Spend some quality time asking the “what-if” questions next time you sit down to plan a trip. Look at all of the destination’s approaches, plus pick a few alternates and check their procedures. You might find a few surprises. You’ll certainly come away with a better understanding of how the IFR system is glued together.

Dave Higdon is a professional aviation writer/photographer with serveral thousand hours of flight time, including hang gliders, ultra-lights and airplanes.