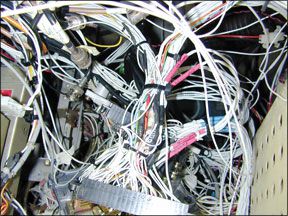 This aviation “thing” brings with it the potential for events seemingly designed to test our internal response systems. You know the kind: situations with substantial potential for our adrenal glands to start working overtime. Learning how to deal with these kinds of events is one of the things flight training is all about. The time we spend with an instructor practicing various scenarios-from broken gyros and other useless instruments to no-flap landings and complete engine failure-

teaches us how to combat a number of not-uncommon problems. And, unless were flying a glider, hot-air balloon or powered aircraft lacking an electrical system, the prospect of losing those flowing electrons-especially when in flight conditions where we really, really need them-is one very real prospect.

Thanks to the ways most of our aircraft were built, we can face a generator or alternator loss with a modicum of standby power available for dealing with it and getting safely on the ground. In fact, most of the powered aircraft we fly will stay aloft quite nicely with the master switch off. Yes; some things will be unavailable, like communications, lighting and landing gear. How we react to a loss of generating power can quickly render any reserve power moot-or, in the better alternative, assure that reserve power is more than enough to let us get on the ground, safe and sound. Lets take a look at why.

The sales numbers say most of us still dont fly aircraft equipped with standby alternators, secondary electrical buses or dual batteries, features increasingly common on planes built in the past 10 or so years. Those fortunate enough to fly with secondary or alternative electrical power sources gain not only the higher degree of redundancy but also a greater sense of comfort that critical systems wont fail due to a lack of current.

Still, even the simplest airplane with an electrical system flies with its own built-in standby electrical power supply: the battery. Aircraft with a generator or alternator generally also sport a battery-which provides a modicum of electrical-system redundancy.

Beyond providing motive force so the starter motor can fire up the engine, the battery also serves as a buffer for the electrical system that gives and takes as demand changes and charging output varies. Thanks to the voltage regulator, the battery gets topped off after the high load of starting the engine and continues to receive a maintenance charge to balance what lights and radios and autopilots and the like siphon off. Should the supply component fail-alternator or generator-that battery becomes the lifeline for the electrical components. But it has limits, of course.

Consider the battery as a water tank. The generating source (alternator or generator) serves as a stream supplying water to the storage tank as it meters out the water depending on how many devices need power. As the tank fills, the stream flows only enough to keep all the devices working. Now imagine the stream instantly dries up-no water coming into the tank. Initially, all those devices continue turning thanks to the tanks reserve. But, naturally, with no source refilling it, the tank drains. And once all the water drains out all those devices will stop working. So it is with the battery. Depending on its amperage-the tanks volume-the battery will be depleted from the load of the components draining current.

The pilot generally needs to take no action for the electrical system to take power from the battery. But a battery without a supply source will drain steadily-just how long it lasts falls under the control of the pilot. That makes the pilots job one of managing the devices depending on it to ensure at least some of those devices continue working all the way to the airport. How we do that is the larger question.

To answer it, we need to know how big our water tank is and how much water is required by each device now depending on it. The more water those devices require, the faster the tank drains.

How about the battery? It also has an amperage rating-essentially, a description of its full-charge capacity. How much drain you put on the battery and how much it holds determine how long the plane will continue to have power for radios, instruments, lights, transponders. This means learning a few electrical-power details about all those components.

Each electrical device in the airplane needs a set amount of electrical power to function. A comm radio may need 0.5 ampere hours-expressed as “0.5 Ah” or “500 mAh” in the case of milliamps-when in standby mode, 0.75 Ah when the squelch breaks and we hear a transmission, and 1.5 Ah when transmitting. Likewise, every other electrical component in the airplane has a specific current draw. Some devices items are switched together-an example might be nav lights and panel lights-and we need to know whats being powered by each circuit. To determine how much demand is being placed on the electrical system, we need to add up the draw of each device and each circuit. Add up the total load of all the electrical and electronic devices and you get a total load for the electrical system.

As an example, if you have a 25-Ah battery and your full-up, everything-on electrical load is 35 Ah, well, youve got about 40 minutes until the juice drains from the battery. When that happens you cant use the radio to talk to ATC, who cant see you anyway because the transponder stopped transpondering. You may also find yourself with a landing-gear emergency if the battery dies and the gear needs electrical power to cycle.

Couple any of these situations with night, IMC or both, and youve just let a minor hassle become a serious situation with life-threatening stakes. So knowing what components need how much power serves as the first step learning how to handle an electrical-system crisis. As you go through your manuals and instructions for your aircraft components to learn each items power needs, make a list. Then use the tips in the sidebar on the opposite page to determine your batterys capacity and how long it will support your minimum equipment.

What to do, what to say

As soon as youve confirmed the loss of generating power dont be shy about seeking help. Even as you start through your list of stuff to shut off, let ATC know youve just lost your alternator. When you do, youll likely get the standard, my-chair-isnt-moving question: “What are your intentions?”

If you dont feel like its an absolute emergency, dont declare one. On one hand, a generator failure in IMC may be an emergency if youre a long way out and you face a to-minimums approach. Closer in or knowing youll break out well above DH or MDA, maybe the declaration isnt warranted.

Even without an emergency declaration from you, ATC will recognize the seriousness of your situation and act accordingly, which may be nothing more dramatic than giving you vectors to the final approach course while vectoring other traffic out of your way-or stopping a departure that might conflict.

Be sure you know and understand the limits of any standby electrical systems, essential buses and the like. Even those with standby systems may require the pilot to shed load just like the pilot with only a battery for backup. That may include, for example, data-linked weather information, traffic-avoidance systems and/or the autopilot.

Know your aircraft, your systems and how to use them. Then, get safely on the ground and find a mechanic.