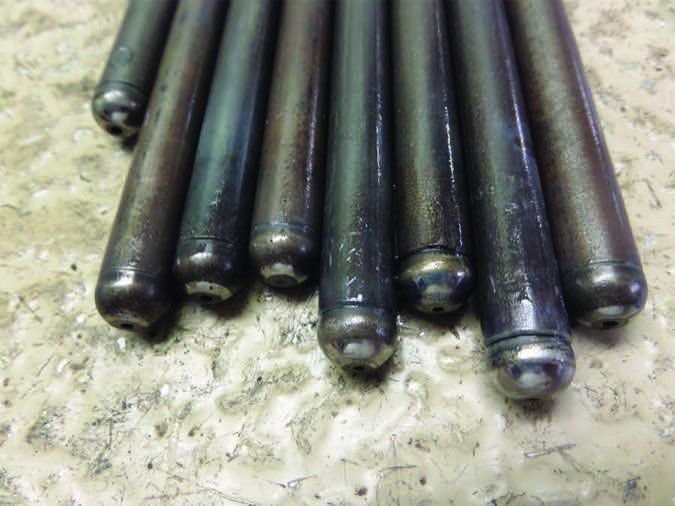 The number 3 cylinder exhaust pushrod broke, due to a valve stuck in the closed position. The valve was not stuck at the time of the investigation. No marks were seen on the top of the piston as viewed through a borescope. The lifter came apart as a result of the broken push rod but appears to have been operating properly prior to the event.

Inspection revealed 10 of the 12 pushrods are worn. At 578.9 hours tach time, abnormal pushrod wear was noted when changing cylinder number 3. At 627.0 tach hours, the number 2 cylinder was replaced and all pushrods were re-inspected. All were found to have abnormal wear.

Inspection performed IAW SA-167A. Four pushrods and 4 rocker arms were found scored. All parts were replaced due to being worn beyond acceptable limits.

After receiving a report from another operator regarding an anomaly found with the aileron control rods, inspected the rod ends on our aircraft. Found rod ends on both the left and right ailerons bent. The rod ends appear to have been bent to accommodate the movement of the aileron but we cannot find a description of this process in the maintenance manual.

The number 1 cylinder intake and exhaust pushrods were not drilled through on one end. This defect would not allow oil to travel up the pushrod to the rocker.

Customer reported metal in oil filter. Extreme wear was found on pushrod ends and the rocker arm sockets. It appears that not enough lubricating oil is reaching the top of the cylinders were the rocker arms are located.