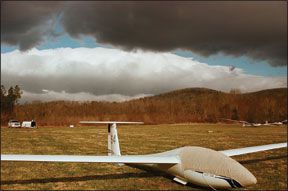 The thing with postponing or canceling a flight? One is sometimes left with a nagging feeling that maybe they could have made it and everything would have been fine. But, one then realizes that they’ll never know. Until now.

I was supposed to fly home to San Jose, Calif., from Yerington, Nev.  The route takes one just north of Topaz Lake and a few miles south of Lake Tahoe. The terrain is rugged and the area southwest of the Pine Nut Mountains is almost always bumpy. I called Flight Service for a briefing and got the news I expected: Winds of 60 to 70 knots were blowing out of the northwest and Airmet Tango was in effect.

Clouds were gathering and the blue sky was slowly being overtaken by gray. I thanked the briefer, filed a VFR flight plan and hung up to ponder the situation. I also called my wife to discuss whether or not I actually had to be in San Jose the next day.

About 20 minutes after my briefing, Flight Service called. I was surprised because I only get calls from them on the rare occasion when I forget to close my flight plan. It was the same briefer who told me he had been looking at the weather some more and there was what looked to be a huge rotor cloud 40 miles long stretching across my proposed route of flight. He suggested that if I was going to fly, I should go way south, closer to Bishop, Calif.

It was then I decided to stay on the ground. I thanked him for service above and beyond the call of duty, and hung up to call my wife and tell her I wouldn’t be flying.

At the same time I was making a decision to stay on the ground, another pilot in Las Vegas was preparing for takeoff. He departed Las Vegas a couple hours later, bound for Minden, Nev., a route taking him over the same area, right where the briefer told me the rotor cloud was churning. He never made it.

The next day, I spoke to his father and the gentleman from whom he borrowed the plane, who told me about his plan and destination. Unfortunately, search parties found the wreckage a couple days later. The crash site was just southwest of the Pine Nut Mountains, a bit more than 20 miles from Minden.

Though the official cause has yet to be determined, we do know winds were ferocious that day. I spoke to another pilot who landed in Yerington, electing to cut short his flight to Minden because it was “just too bumpy.” The pilot who crashed was no slouch. He was a CFI and flew professionally for an air ambulance company.

It’s kind of spooky in a way. Every pilot I tell about Flight Service calling me back is amazed. No one has ever had that happen. For me, personally, I am grateful, yet feel sorrow for the pilot who elected to go ahead in those conditions and met with the most undesirable outcome possible.