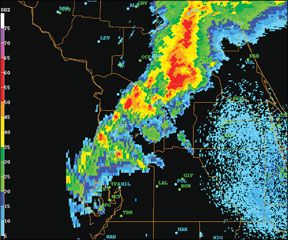 It had been a perfect day, so far. My early-teen kids and I had flown to Tampa, Fla., for a family reunion. Bidding fond farewells, it was time to motor back to the Washington, D.C., area and put the airplane, the kids and me to bed.

Of course, it was summertime and, of course, a fast-moving cold front stretched from the Gulf of Mexico well into New York. A pre-launch glance at the FBOs Nexrad display showed a well-defined mass of yellow and red splotches, embedded in green, parallel and west of my course, but moving east. It was definitely time to go.

Soon, we had climbed to 11,000 feet and cleared the Florida peninsula. Cruising a couple of miles offshore, we were in the clear, but eyed the dark clouds closing in from the west with trepidation.

At each handoff, we queried ATC for holes in the line and asked what other flights were doing. Uniformly, the answers were no, there were no holes, the jets were climbing to the flight levels to find ways through the line while the FLIBs like me were staying home. No, ATC had few suggestions except stay where we were and keep going north (to the next sector where we would be another controllers problem).

Armed with only a Strikefinder and two Mark I Mod. I eyeballs, that was a good plan, for now. But, since our Bonanza didnt have the gas for Bermuda, we would have to find a way to get through the line at some point.

I debated several options, the most attractive of which was to descend down to scud-running altitude and duck underneath the line. The low, flat eastern Carolina terrain offered few hills to run into but the idea didnt appeal. Another option was to tighten the belts and ride it out long enough to get on the backside. We had to make a decision soon: Our course and the cold front were going to intersect in a few more miles.

Rather than duck under or bounce our way through, Wilmington, N.C., became our destination and we landed far enough ahead of the front for me to get the kids inside the FBO, secure the airplane and run back to the lounge as the first few raindrops began to fall.

Soon, the ramp was ankle-deep in water and the plane was getting rinsed off. By this time, it was late in the day and I was tired. We ended up grabbing a crew car, finding a hotel and camping, 90s style.

The next morning was calm and clear. After an uneventful 1.5 hours, we arrived back at home plate, safe and sound.

Since then, Ive often confronted similar thunderstorm lines and decided to wait them out, either at the FBO or at home in my own bed. When dealing with thunderstorms, it pays to plan ahead and not be in a hurry. In the summertime, at least, if you have time to spare, go by air.