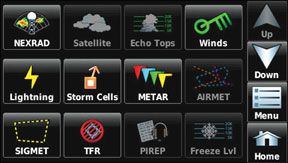 Those of us using a moving map with datalinked weather depiction-especially Nexrad radar-should be careful of relying on it too heavily. There are numerous stories of Nexrad not matching what the Mk. I, Mod. 1 eyeball displays. Heres mine.

Last summer, my wife and I flew our 1976 Piper Arrow over to Great Harbor Cay Bahamas from Miami, Fla.s Tamiami Airport. We typically leave late morning to avoid afternoon thunderstorms. With our briefing, DVFR flightplan and Eapis paperwork taken care of, all we had to do was fly the route. Everything looked good from the weather standpoint, but in the summer things can and do change rapidly.

We loaded the plane with our usual stuff, taking care not to damage the fishing rods. We took off at 1015, activated the flightplan and 30 minutes later were passing south of Bimini. My wife was at the controls as I did some paperwork and monitored the GPS for progress and weather updates. Everything seemed normal until she said, “I think you need to take over.”

I didnt pay attention to her at first, until she said, “Im not kidding.” I looked up and right in front of us was this angry-looking black cloud. Among some other, unprintable thoughts, I thought to myself, “Where did this come from?”

I took control, glanced at the Stormscope and noted it showed a bunch of electrical activity on our nose. The scope was set to 25 miles and we were entering a thunderstorm. Lightning was in the cloud.

I did my best “fighter-pilot” maneuver to prevent us from entering the edge of the cloud-we were so close we encountered some significant turbulence. We were now 100 miles offshore with no land in sight-just me, my wife, the plane and a thunderstorm. I had to make a quick decision to go back to Miami or continue on.

There was a smaller cell to our right and about a 15-mile wide corridor between it and the one we almost flew into. The east was free of major activity, so we made the decision to press on, eventually landing at Great Harbor. Along the way, we encountered nothing more than a bit of rain.

After landing, I called flight service and closed our flight plan. Then I asked, “Hey guys, what happened here? I wouldnt have left if I knew there were thunderstorms out there.”

Apparently, the Nexrad went down about the time we took off from Tamiami, essentially rendering our in-cockpit weather display useless-we were getting five-minute updates of obsolete data. In other words, it looked as though we had a straight shot over with no significant weather concerns. Had we been higher, we wouldnt have been VFR but ATC could have told us about the weather. I never want to be in that situation again and am actively working on my instrument rating.

Lesson learned: Be careful in relying too heavily on datalinked weather and always compare it to what you see outside.