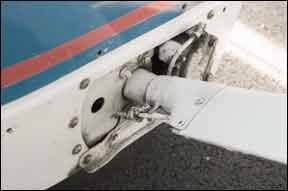 One sunny, spring day several years ago, I was out flying with a friend. He was a little rusty, so we picked a quiet, non-towered field for some pattern work. He was in the left seat of the borrowed Skyhawk; I was in the right.

My friend was doing okay with the pattern work, although his landings needed work. We were attempting to polish them up when he dropped in the airplane from about 10 feet. It didn’t bounce, there were no “uh-oh” noises and we exited the runway normally, taxiing back for another one while I coached him.

Reaching the end of the taxiway, he reduced power and used the Skyhawk’s nosewheel steering to maneuver the curve, then added brakes to come to a stop so we could run the checklist and look for traffic in an orderly fashion. But the airplane didn’t stop.

Instead, it tried to weathervane into the stiff breeze blowing down the runway. I got on the brakes about the time he exclaimed something wasn’t working, only to find the right pedal providing no resistance. The left one was okay, and gave enough braking energy to stop us before rolling into the drainage ditch under the taxiway. Using full left rudder and brake, we tried to straighten out the Skyhawk, but it just wasn’t going to work—we were too close to the ditch. Admitting defeat, we shut down and got out to move the airplane. That’s when I noticed the wet fluid on the right wheelpant.

My left-seater’s last “arrival” flexed the right strut so much the aluminum brake line tubing had cracked, allowing its fluid to leak out. We had no right brake and I was no longer certain of the left one. We ended up grabbing the tow bar and pushing the airplane back down the taxiway to the quiet airport’s ramp, then securing it. I called the owner to relay the news, and she graciously drove an hour to pick us up. The plane was repaired over the next few days and was back in its tiedown by the end of the week.

The first thing I learned was to more closely monitor my leftseater, no matter whom it may be. The second thing is to stop and do a walkaround after a hard landing. The third thing is to never try forcing the issue: If the airplane doesn’t want to do something, there’s likely a good reason.